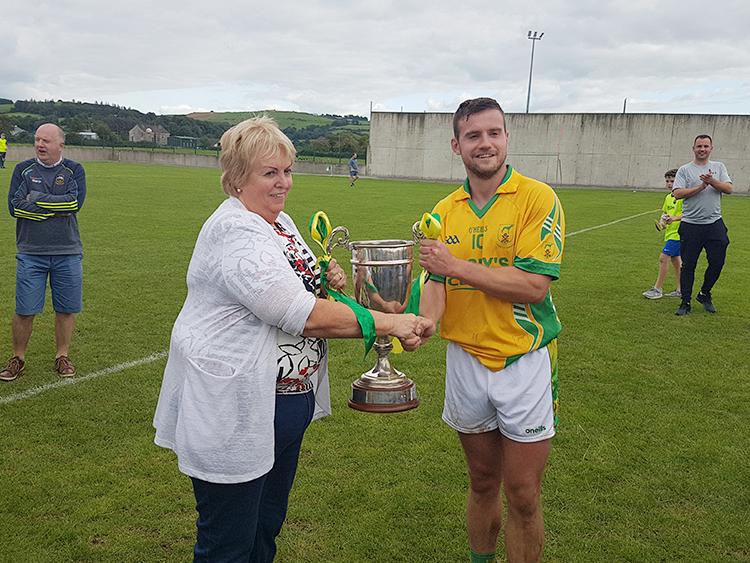 Toomevara collected the Greyhounds’ third successive North Tipperary Junior A Hurling Championship title at Templederry on Sunday evening when beating Nenagh Éire Óg by six points after extra-time in a thrilling contest. The Blues gave this decider everything they had, but Toome found a hero in Jamie Quigley who buried an extraordinary four goals during this contest despite only being introduced as a second half substitute.

Although Quigley’s haul of four goals, Conor O’Meara’s twelve points, Paddy Grace’s five from play, the performance of Kieran Brislane in the middle of the field and that of Kieran Flaherty at full-back were noteworthy veteran David Young was hugely influential and but for Quigley’s impact Young would surely have collected the man of the match award; his ball-winning ability had a huge impact on this contest.

The Greyhounds started well with Paddy Grace notching a terrific five points from play during the opening twenty-three minutes. David Young and Conor O’Meara (four, two frees) also contributed to the Toome tally during this period while Éire Óg hit back with five of their own which arrived courtesy of Anthony Walsh, Donnacha Quinn (two), Conor Hennessy and Killian Malone. And, Nenagh struck for the opening goal of the game in the 18th minute when Anthony Walsh buried a rasper.

Another Conor O’Meara strike left three between the sides (0-11 to 1-5) with five minutes to play, but Éire Óg rallied during the closing stages of the opening half when points from Seán Phelan, Niall Madden (two) and Killian Malone ensured that the sides were level at the break (0-12 to 1-9).

It was tit-for-tat during the opening five minutes of the second half before an Aidan Cahill point presented Toomevara with a narrow 0-15 to 1-11 lead.

Nenagh, however, were growing in confidence and tied the game when Niall McKeogh set up Adam Healy for a fine strike in the 36th minute. Efforts from John Cahalan and Donnacha Quinn (free) soon followed to leave Éire Óg two clear (1-14 to 0-15).

Entering the final quarter Éire Óg still led by two when Jamie Quigley plundered goals in the 46th and 49th minutes to seize the initiative in spectacular style for Toomevara (2-16 to 2-16) - David Young played a key role during the build-up to both strikes.

To be fair Éire Óg proved themselves a resilient bunch thereafter. Points from Donnacha Quinn (free) and John Cahalan (two) closed the gap to one and although Toomevara forced themselves three clear (thanks to David Young and Seán Flaherty) the Blues still managed to retrieve the situation and force extra-time (2-18 to 1-21).

Éire Óg struggled to contain Toomevara during the opening period of extra-time - only Seán Phelan managed a response when the Greyhounds’ Kieran Brislane, Conor O’Meara (0-4, one free, one ’65) and Seán Flaherty forced their side five clear before Jamie Quigley plundered his third three-pointer in first half injury time - Michael Delaney and John Delaney combined smartly to set up this particular strike.

Trailing now by eight (3-24 to 1-22) Éire Óg needed to do something drastic and rallied immediately after the break when Darragh Walsh played a smashing one-two with Eoghan Slattery before firing home from close range. Sure as sugar, however, Jamie Quigley struck for a fourth Toomevara goal within a minute. Darragh Walsh actually managed to squeeze home a late 21-yard free, but Toomevara were deservedly crowned champions after Conor O’Meara belted over the final score of this entertaining contest.