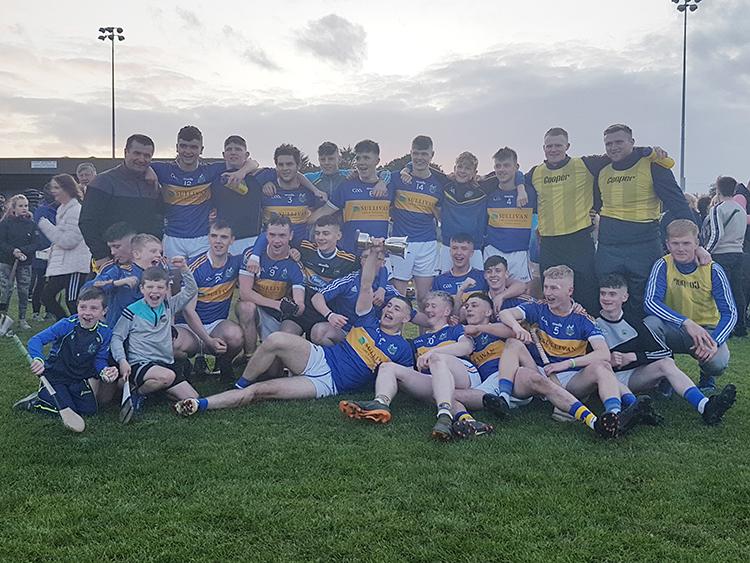 The Kiladangan men edged a ferocious battle with Toomevara to win the Ger Gavin North Tipperary Minor A Hurling Championship at Borrisoleigh on Wednesday evening by two points for the second successive year. And, this victory spoke volumes for the on-going body of work being carried out by a whole army of proud Kiladangan people.

This group of players did not prevail at under-16A or under-14A level, but the Kiladangan club worked hard to develop each and every player and with Séamus Gleeson and Michael Ryan leading the project alongside senior players like James Quigley, Darren Moran and Ciarán Kelly the men draped in blue and gold realised their potential in startling fashion in this minor decider. Given the journey that this group of players have travelled this success must taste very sweet for the Kiladangan club.

Toomevara gave every inch of themselves to this contest with Darragh Spillane, Kenny Ryan and Eoin Healy outstanding for the Greyhounds, but in the end Kiladangan proved just too strong on this occasion.

Darragh Ryan, Seán Hayes, DJ McGrath, Darragh Butler and Paul Seymour were in terrific form for Kiladangan while man of the match Shane Gleeson gave an absolute exhibition of free-taking and was also outstanding in open play. The wing-forward was especially influential in the opening half against the wind when he converted six vital placed balls (one a cracker from inside his own 65-yard line).

Please spare a thought too for Kiladangan ‘keeper Neil Cahalan who pinged out a whole series of pin-point puck-outs to his half-backs during that vital opening half.

Toomevara took off like a rocket with the impressive Eoin Healy firing home 1-1 inside the opening three minutes. Eamon White added a converted free soon after and although Shane Gleeson was responding with frees for Kiladangan the Greyhounds were well worth their initial 1-2 to 0-2 lead.

Following points from Darragh Spillane and Kenny Ryan Toomevara led 1-4 to 0-4, but DJ McGrath had already been denied two goals (one effort was saved by Rory Brislane and another was blocked by Jack Gleeson). And, the Kiladangan corner-forward made no mistake in the 16th minute when he buried a three-pointer (1-5 to 1-4).

Toome hit back with two Eamon White strikes (one free, one ’65), but the Greyhounds were left cursing their misfortune in the 22nd minute - Kieran Boyle found the side netting at one end of the field and then, at the other, Eoin McGrath fired Kiladangan into a 2-5 to 1-6 lead.

Toomevara rallied late on with efforts from Kenny Ryan and Ciarán Grace, but Kiladangan held a significant 2-6 to 1-8 advantage at the break. 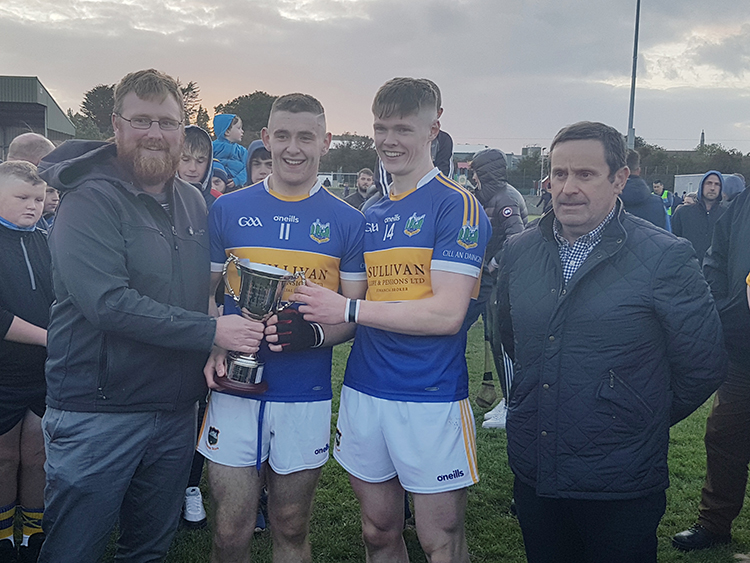 An Eamon White free tied the game immediately after the break, but straight from the resultant re-start Seán Hayes fired home his side’s third goal (3-6 to 1-9) - the composure displayed by Hayes to wrong-foot Toome ‘keeper Rory Brislane before applying the finish would suggest that this Kiladangan forward is destined for big things.

In keeping with their wonderful tradition, however, Toomevara responded to the challenge posed with a brilliant surge - points from James Meagher, Kenny Ryan (two) and Eamon White (free) forced the Greyhounds into a one-point lead (1-13 to 3-6) with thirty-seven minutes on the clock.

Shane Gleeson hit back with three Kiladangan frees, but a superb Darragh Spillane point from distance in the 43rd minute ensured that there was just the minimum between them (3-9 to 1-14) - in the first half Spillane was positioned at centre-forward, but Toome opted to employ the sweeper in the second period meaning that the influential Spillane dropped back to the heart of his defence.

A terrific Eoin Healy point tied the game entering the final quarter (3-9 to 1-15), but almost immediately Shane Gleeson edged his side back in front via a placed ball (Kiladangan led the free count 14-4 by the 46th minute and ultimately dominated this stat 20-13).

Thanks to efforts from Paul Seymour, Shane Gleeson (free) and Seán Hayes (two) Kiladangan out-scored Toome 0-4 to 0-1 between the 46th and the 56th minutes to leave a significant four between the sides (3-14 to 1-16).

Eamon White (free) and Shane Gleeson then exchanged scores before Toome ‘keeper Rory Brislane dropped a long-range free into the Kiladangan square and Adam Hall scrambled home a goal for the Greyhounds in the third minute of second half injury time.

With just a point between the sides Toomevara had every chance of rescuing the situation, but Shane Gleeson fired over his 13th point of the evening to seal a famous win for Kiladangan in the 64th minute.