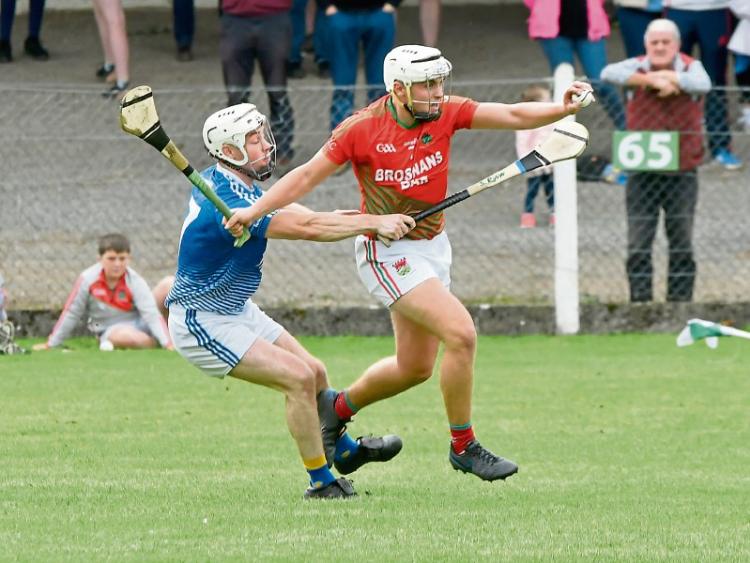 Conn Bonnar (Cashel KC) gets away from Sammy Ryan (St Mary's) in this afternoon's Seamus Ó Riain Cup Group 4 game at Cahir which the West Tipp side won by 1-18 to 1-14.

In a knockout game in all but name, Cashel King Cormacs overcame Clonmel side St. Mary’s in the Seamus Ó Riain Cup at Cahir this afternoon and were full value for their four points win at the end of proceedings.

The only way the King Cormacs could stay alive today was with a victory and they achieved just that with a fully committed, more determined effort than their South Tipperary opponents.

It was a remarkable comeback for the West Tipp side who at half-time in last weekend’s game against JK Bracken’s trailed by nine points and looked on their way out of the competition. But the battling qualities and in-your-face hunger that they showed in the second half against the Templemore side - which earned them a vital draw - were again evident today. They out-muscled and bossed ‘The Marys’ and were even more comfortable in the end than the scoreline suggested.

The Clonmel side, following last weekend’s victory over Clonakenny, came with high hopes and started the better to lead 0-3 to 0-1 after five minutes. Simon Delaney’s opening point of the game for Cashel answered by three white flags from Jamie Peters, Seamus Kennedy and Niall Hoctor. A Conn Bonnar free was followed by a superb sideline cut from 65 metres by centre-back Eoghan Connolly to restore parity after eight minutes.

Gearóid Buckley edged the Clonmel side ahead with a 65 before St Mary’s got a big fillip with a goal after 11 minutes. A long delivery played in from the wing by Seamus Kennedy wasn’t cleared by the Cashel defence and Michael Murphy whipped in a goal off the inside of the post to put his side four clear at 1-4 to 0-3.

Tit-for-tat the sides went over the next 10 minutes or so, scoring four points apiece, but leaving Mary’s still in front after 20 minutes by four points.

Midfielders Michael Coleman and Seamus Kennedy swopped two long range points, before Coleman – who was excellent all day – hit his second in two minutes to be cancelled this time by a point from 65 metres by Gavin Ryan for St. Mary’s.

After good work by Josh Ryan, cousin Richie Gunne pointed in the 17th minute to put St. Mary’s all of five points clear – but that margin was short-lived when Ross Bonnar got in behind the defence and took his point well.

A Conn Bonnar free was nullified when Niall Hoctor reacted to a mistake in the Cashel defence to point to keep the gap at four.

Arguably the moment that changed the game in Cashel’s favour arrived in the 21st minute. Cashel centre-forward Paddy Fahey picked up on a pass by Conn Bonnar and ran at the Mary’s defence from 45 metres to plant a top class goal high into the roof of the net. Cashel were suddenly back in the game, taking a hold of proceedings that they never relinquished thereafter.

Three placed balls finished the first half, with Gearóid Buckley’s effort for Marys answered by two from Conn Bonnar, the last of the first half a 65 after his earlier free was deflected out by Enda Dunphy in the St Mary’s goal.

St Mary’s introduced Sean Kennedy for goalscorer Michael Murphy at half-time but it was Cashel who hit the front for the first time since the opening minute of the game – this time with an excellent point from the left sideline by a fast-running Adrian Cummins.

Goal chances were rare all day, but the Clonmel side were presented with one in the 35th minute. A move initiated by team captain Ross Peters was continued by Seamus Kennedy who delivered to his brother Sean but the chance was lost with Cashel stretched. St Mary’s never got another goal chance for the remainder of the encounter.

It took the Clonmel side all of 10 minutes to raise their first white flag of the half, a free by Gearóid Buckley to tie up the scores once again at 1-10 apiece. But Cashel looked like a side more determined and more committed in the tackle and the pendulum was slowly swinging their way.

A Conn Bonnar free was quickly followed by Adrian Cummins’s second point of the day following a rousing clearance by Cormac Ryan.

An over-the-shoulder point from Tipperary senior Seamus Kennedy temporarily reduced the deficit to one, but his opportunities were few all day with Cashel keeping him well marshalled.

Paddy Fahy and another Conn Bonnar free pushed Cashel 1-14 to 1-11 clear with 10 minutes remaining and with the way they were strangling St Mary’s of good possession it was hard to see where the firepower was going to come from to deny Cashel the victory they were hunting for.

After Jason Lonergan was fouled Gearóid Buckley sent over the free but from the puck-out Paddy Fahy got clear and punished St Mary’s once more, before Conn Bonnar added another free to push the advantage out to four for the King Cormacs.

Sean Kennedy replied with a lovely point from a difficult angle for St Mary’s in the 57th minute bringing Cashel within a green flag, but two more frees from Conn Bonnar made Cashel safe before Sean Kennedy once again pointed to round off the scoring.

Cashel were 1-18 to 1-4 ahead at PJ Nolan's final whistle and deservedly so.

With JK Bracken’s defeating Clonakenny in the other game in this group this afternoon it means that the Templemore side and the Ronan O’Donoughue managed Cashel now progress.

It was an all-round team effort from Cashel today that delivered the result. There were some fine performances among them with Simon Delaney, Eoghan Connolly and Ciaran Quinn sound in defence. At midfield Ross Bonnar and Michael Coleman were everywhere. Conn Bonnar’s 0-9 from placed balls was immense on the day but Paddy Fahy and Adrian Cummins chipped in well with some impressive scores for the winners who will now feel the wind in their sails after the past two games.

It was a disappointing day at the office for St Mary’s whose year now ends at this grade. After a satisfactory start the heads seemed to go down after the Cashel goal and too often they were second best against a hungrier Cashel who also used the sliotar more effectively in possession.

Seamus Kennedy was faultless in his workrate and commitment as ever, while the likes of Jamie Peters, Ross Peters, Sammy Ryan, Richie Gunne too had their moments – Enda Dunphy did well between the posts –  but they can have no complaints at the end of the day with this defeat.