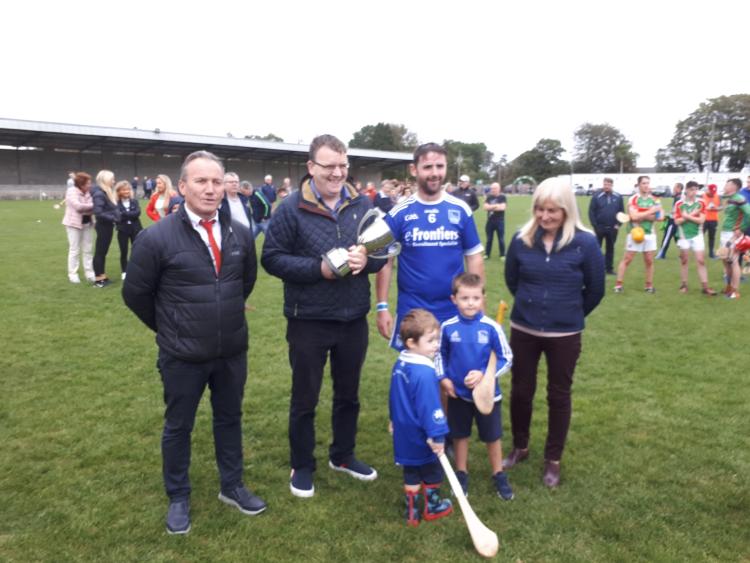 Sarsfields captain John Lawlor with TJ Ryan of Roskeen Construction, Jonathan Cullen and Sally Young of the mid board

A goal in each half from youngster Cian Stakelum earned Thurles Sarsfields a comfortable victory in the Roskeen Construction mid Tipperary junior A hurling final at Holycross this evening over Loughmore Castleiney.

The Thurles lads played with great flair and purpose from the off, but a Cian Hennessy goal for Loughmore Castleiney in the 3rd minute was just what his side needed against the fancied Blues.

Sarsfields responded and when Stakelum goalled brilliantly in the 8th minute, having linked with Matthew Kelly, the  attack really took off and they were to bang over nine points  to claim a 1-13 to 1-7 interval lead - Loughmore Castleiney getting three of the last four points of the half to keep them in the game.

However, when Stakelum bagged his second goal at the end of the third quarter, Sarsfields lead was suddenly at nine points and it was game over as a contest, despite the fact that Loughmore Castleiney battled so gamely until the end.

Sarsfields veteran captain John Lawlor was in inspiring form at centre back as was Cian Treacy who bagged 0-12, while Dylan Bourke, Aidan Doyle, Mark Lanigan and of course the two goal hero Cian Stakelum were the main men responsible for this victory.