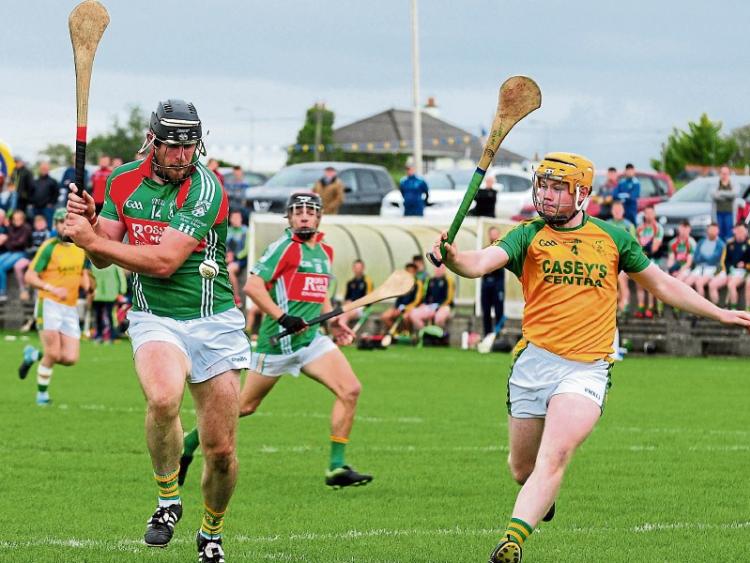 To say  that our club championship structures are convoluted   is a bit like saying that water is wet. It’s a statement of the blindingly obvious. Don’t even try to explain the ins and outs of the system to an outsider because you’re liable to get strange looks.

The divisional link is the main complicating factor in our system.  In hurling, for example, the group games have now been completed but everything awaits divisional results. Divisional winners, who haven’t already qualified through their county groups, are entitled to a place in preliminary county quarter-finals.

Clonoulty’s bid to retain the title is at risk following their defeat by Toomevara at the Ragg on Sunday evening. Given what was at stake a sizeable crowd turned up to witness this one and they saw an exciting contest where Toome’ dominated the opening half before Clonoulty rallied strongly in the second period.

Ultimately that first half undid Clonoulty. Toome’ were the sharper side, strong and direct in their running against Clonoulty’s more lateral play. The North side looked the more energetic, had the busier work rate and Clonoulty struggled to keep up.

Already the likes of Joey McLoughney and Jason Ryan were noticeable in the Toome’ defence.  The Quirkes, Robbie and Russell of Cappawhite origin, were busy too and Mark McCarthy was spearheading the attack.

The game’s only goal came in the third minute and it would prove crucial. Mark McCarthy fired in the shot from out in the left corner. Declan O’Dwyer got his stick to it but somehow the ball spilled in underneath him for a fortuitous goal. By game’s end it was the difference between the teams.

In fairness to Clonoulty it was a half where they had little luck. Twice Thomas Butler had shots saved and they lost Fiachra O’Keeffe to injury.  They weren’t playing particularly well, the breaks were going against them and they were seven-down at the interval.

They did rally in the second half, putting more zest into their play and had Toomevara craving the final whistle at the end. Dillon Quirke hit four excellent points but they needed a goal and never came close to threatening one. In fact it was only in the final stages that they really got a run on Toome’ when they came from eight-down to reel off six unanswered points that set up a tense finish.

When you include the ten minutes of additional time that was played Toomevara didn’t score for the last twenty minutes of the match, which is an interesting statistic. If Clonoulty had sneaked a late winner I’ve no doubt the extra play time would have been an item of contention, though Toome’s efforts to kill the momentum of the game in the final stages didn’t go unnoticed either.

It’s a disappointing one for the reigning champions but they’ll have to learn the lessons. You can’t give a side like Toome’ such a head start and then hope to reel them in.  John O’Keeffe as ever was majestic in defence but the attack lacked threat, especially near goal.  It all puts added emphasis now on their campaign in the West.

The most impressive performance I’ve seen so far in this championship came on Saturday evening over in Templetuohy where Loughmore thrashed Upperchurch. It was an impressive statement of intent from the McGraths and company.

In a twelve-minute spell from the seventh to the nineteenth minute of the first half Loughmore rammed in 2-9 against 0-2 in reply for the ‘Church. Talk about world war two blitzing, this was utterly devastating stuff.

The rout began with a Liam McGrath goal. Then the McGrath name was all over the free-flow of points that followed from the sticks of Aidan,Tomas, John and Noel with Evan Sweeney breaking the pattern with a few points of his own. Then John McGrath poached a typical goal by out-fielding his marker and finishing with ease.

Upperchurch were utterly bamboozled. The slickness, the movement, the combination, the striking – everything about the Loughmore lads was simply on a different level to their opponents. A dozen points separated them at half time.

Could Upperchurch rise from the ashes in the second half? Early on Colm Ryan and Noel McGrath got into a tangle and both were booked as things started to heat up. But it was a mere puff of smoke. The ‘Church did out-score their opponents four-one early in the half but then a McGrath special quelled the uprising. Noel from midfield found his brother John in space with a laser-guided delivery and the green flag was waving once again. The rest was simply playing out time.

Loughmore are third favourites with the bookies to win the county behind Kilruane and Kiladangan. They’re in the mix for sure though the dual-mandate with football and the associated risk of injuries are major threats to their ambitions. I’ve no doubt their equal dedication to both codes has cost them in the past and will again in the future.

For the moment you just have to admire what they’re about. I think there’s a decent balance to their team this year. Evergreen David Kennedy was in goal; his service to the club has been amazing. Joseph Hennessy and a steady Brian McGrath anchored the defence where Lorcan Egan was very impressive on Saturday. Around the centre then you have Noel McGrath pulling the strings with John leading the attack. Aidan McGrath’s return from injury is very timely too and Liam is a constant threat near goal. It’s a potent side.

For an Upperchurch team that has been close to a Mid breakthrough in recent years this was a major regression. But for the exceptional contribution of Padraic Greene their blushes would have been even greater.

Elsewhere at the weekend Killenaule’s season of woe got even worse. A fifteen point drubbing by Thurles Sarsfields sends them into a relegation battle with Burgess, Moycarkey and Portroe. In their present mood they’ll struggle to beat anyone.

Killenaule’s second half display in this game at Boherlahan on Sunday was one of utter capitulation. They scored a mere four points in that period as Sarsfields ran riot, led by the free-scoring Aidan McCormack.

It all looked so promising in the first half, at the end of which Killenaule held a marginal one-point lead in what was a poor quality game. They lost Declan Fanning to injury which was costly and they could be grateful for a few timely saves by goalie Jonathan Gleeson. However, it all went pear-shaped on the turnover.

I don’t know how you’d rationalize Killenaule’s decline this year. Individually you look at this team and there’s plenty of talent there with many of their players having worn the county jersey at different levels. Yet collectively the sum of their parts doesn’t seem to add up. It’s a puzzle, one that different managements over the years have struggled to resolve. They seem to lack team cohesion.

In Sarsfields case I wouldn’t be getting excited over a win like this. They’ve slipped quite dramatically from the team that in 2017 completed a four-in-a-row in the county. Their fate now hinges on a revival in the Mid. In their present shape it’s difficult to see that turnaround.

One surprising result at the weekend saw Moycarkey top Borrisoleigh in a game that was, admittedly a dead rubber. I’m told a strange betting pattern emerged during the week prompting at least one bookie outfit to suspend business on the match. Strange to see so much backing for Moycarkey up Borris’ way! Then when you saw the Borrisoleigh line out it wasn’t strange at all. If it was horse racing they’d be before the stewards for not trying.

Anyway the group games are now completed so the field is down to eight plus the possibility of a few divisional winners joining the chase. The four group winners - Nenagh, Borrisoleigh, Kilruane and Kiladangan - are through to the quarter-finals proper while the runners-up in each of the groups, namely Loughmore, Toomevara, Annacarty and Drom face the possibility of preliminary quarter-finals. Incidentally in the draw for the quarter-finals the group winners will be kept apart and repeat pairings will be avoided where possible.

The group games in the Seamus O’Riain Cup are also completed and here at least there are no complications or tie-ups with the divisions. The group winners are Templederry, Holycross, Mullinahone and J.K. Brackens and these will be drawn against the group runners-up, Carrick Swans, Silvermines, Ballingarry and Cashel K.C.

Cashel’s win over St. Mary’s was a significant outcome at the weekend as indeed was their earlier draw with Bracken’s.  It’s another setback for St. Mary’s though there’s no relegation to worry about for this year; relegation to intermediate returns in 2020. Ballingarry’s draw with Ballina saw them edge out their Northern opponents on minimal score difference, minus 9 against minus 10. Margins don’t get any tighter than that.

In the case of intermediate hurling there are five groups, which have now been completed. The top two qualify from each section and then there’s the possibility of divisional winners also joining the list. The five group winners are into the quarter-finals and then three others must win through from preliminary ties among the group runners-up as well as any divisional winners who qualify. Then there’s relegation for the bottom teams. Confused? You’re not alone.