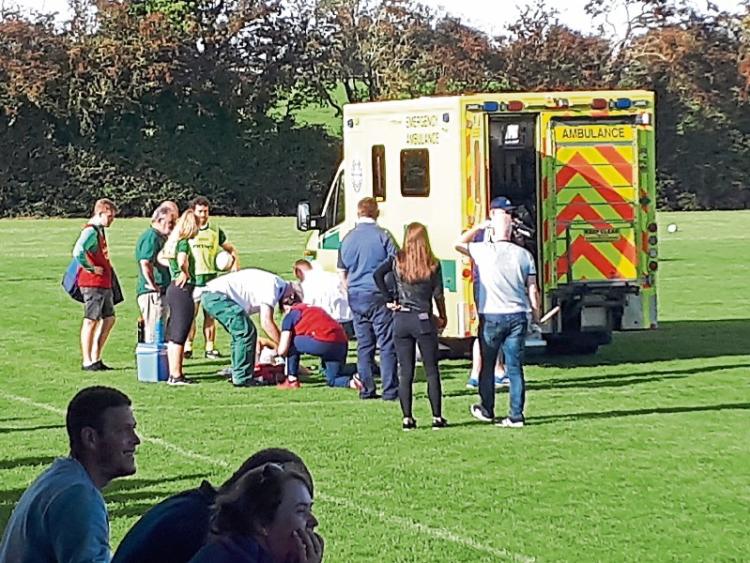 Eoin Fitzgerald is treated on the field by ambulance personnel

Clonmel Commercials' comfortable win over Galtee Rovers in the County SFC at Golden this afternoon was marred following a serious ankle injury to forward Eoin Fitzgerald.

An ambulance was called and Fitzgerald was removed to hospital after a prolonged half time break.

He picked up the injury just before the interval and from his immediate reaction it was obvious that he was in distress.

He remained on the ground for about twenty five minutes before the ambulance arrived and he received treatment at the scene before he was taken away.

Players from both sides applauded as he was lifted into ambulance and driven away.

Fitzgerald was having an impressive game in a rampant Commercials attack in that first half.

The Clonmel side were already through from the group while Rovers needed to win – and to win by at least eight points.

That looked unlikely when Jason Lonergan pointed for Commercials in twenty seconds and virtually impossible when they led by 0-6 to no score midway through the half.

Kevin Fahey was particularly sharp and hit two points with Jack Kennedy, Richie Gunne and Jamie Peters getting the rest.

A Tony Egan free got Galtees off the mark in the 16th minute and followed up with a second five minutes later. Jack Kennedy from a free and Rhys Byron from a play after a great run exchanged points to leave Commercials 0-7 to 0-3 ahead at the break.

The Clonmel side had a useful replacement for Fitzgerald at the start of the second half with the arrival of All Star Michael Quinlivan and the side continued in the same vein, pushing the lead out to seven points, 0-11 to 0-4, midway through the half, outscoring Rovers four points to one.

All Ireland hurling final hero Seamus Kennedy was in fine form, driving hard at the Rovers' defence, with Jack Kennedy also impressing with points from play and frees.

The game was long over before the end with all intensity gone as Commercials coasted to a facile win.

Their concern at the end for the well-being of Eoin Fitzgerald with everyone wishing him a speedy recovery from the injury.