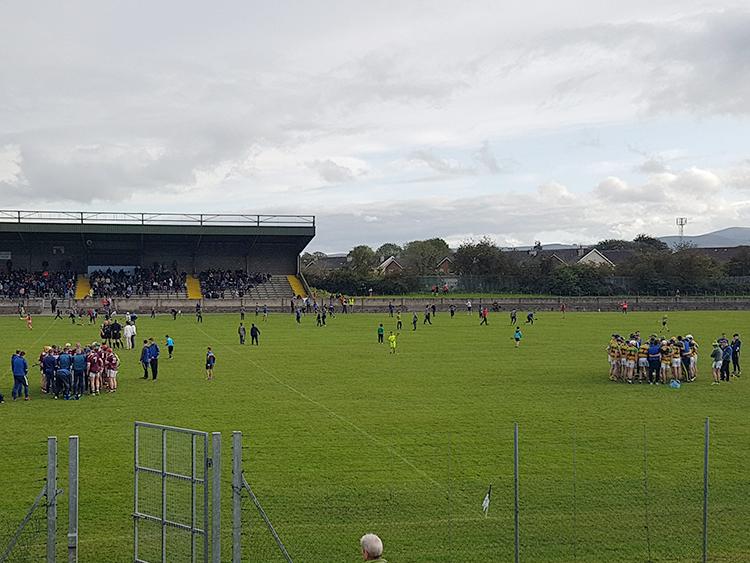 The Borris-Ileigh and Burgess panels of players pictured before extra-time on Sunday.

Borris-Ileigh just about out-lasted a determined Burgess team at MacDonagh Park in Nenagh on Sunday evening to book their place in the final of the Hibernian Inn North Tipperary Senior Hurling Championship.

Two bouts of extra-time were required to separate the sides in an enthralling contest and while you would have to praise the resilience of this Borris-Ileigh side there is simply no doubting the fact that opportunity knocked for Burgess, big time.

Although Borris-Ileigh led 0-6 to 0-3 early on Burgess were six clear (2-12 to 0-12) with nineteen minutes to play and will also argue that both Tommy Ryan and Conor Kenny should have been sent off for striking offences - in the 27th minute Tommy Ryan lashed out at Stephen Murray and was shown a yellow card while Conor Kenny was cautioned six minutes into the second half following a wild pull in a packed goalmouth; that said Burgess’ Brian Hogan may well have also walked for a late hit on Paddy Stapleton at an advanced stage of this contest.

Borris-Ileigh started reasonably well, but Burgess dominated the second quarter and out-scored their opponents 1-7 to 0-3 to open up a four-point lead at the break (1-10 to 0-9).

Donagh Maher was outstanding for Burgess during this period and while Tony Dunne’s goal in the fifth minute of first half injury time was, obviously, significant a handful of incidents suggested a certain slackness in the approach of Johnny Kelly’s men - in the 20th minute, for instance, Burgess ‘keeper Ronan Tucker was allowed to pick out Tadhg O’Halloran in the middle third and the completely unmarked wing-back swung over a handy point.

Irrespective of that Burges happily went about their business and led by four at the break having also fired nine wides. Ultimately, Burgess led the wide count (21-20), Borris-Ileigh dominated the shots which dropped short or were blocked down (8-5) and Burgess also had the edge on the free count (24-18). Borris-Ileigh, however, spurned a hatful of goal-scoring opportunities.

Borris-Ileigh were a team transformed after the break and Jerry Kelly demanded a terrific save from Ronan Tucker in the 36th minute, but just as Johnny Kelly’s men appeared to re-discover their sense of themselves Bill O’Flaherty buried a second Burgess goal in the 39th minute and propelled his side six clear. And, when Stephen Murray swung over a glorious sideline ball in the 41st minute it had the look of being Burgess’ day (2-12 to 0-12).

Borris-Ileigh, however, were having none of it. Paddy Stapleton was introduced to the side and with Ray McCormack driving at Burgess like a man possessed Borris-Ileigh mounted their comeback. Indeed, the between the 43rd and 56th minutes Borris-Ileigh out-scored Burgess 0-7 to 0-2. Stephen Kirwan checked their advances with a great point in the 45th minute off his left, but Borris-Ileigh were misfortunate to miss out on three-pointers in the 51st and 53rd minutes when a JD Devaney rasper was deflected over and then Ronan Tucker denied Conor Kenny.

Thanks to two superb Conor Kenny points in second half injury time Borris-Ileigh appeared to have rescued the situation when Johnny Kelly’s men edged into a narrow lead, but Burgess supporters were left punching the air with glee in the 69th minute when Stephen Murray landed an extraordinary free from inside his own 65-yard line to force extra-time (0-23 to 2-17).

The game was still tied at the interval (0-26 to 2-20) following an exchange of scores, but Burgess were grateful, once more, to ‘keeper Ronan Tucker who conjured another terrific save to deny the raiding JD Devaney.

And, Borris-Ileigh spurned another goal chance immediately after the break when Shane Maher managed to block a Jerry Kelly shot. Burgess had slightly the better of it thereafter and forced themselves into a narrow lead, but right at the death Jerry Kelly rescued his side (0-28 to 2-22).

Extra extra-time was then required and Borris-Ileigh, finally, broke the back of the game right from the throw-in - Ray McCormack carved Burgess open and Conor Kenny buried a left-handed shot. JD Devaney added a point soon after and at the break Borris-Ileigh led by three (1-29 to 2-23).

Efforts from Ray McCormack and Conor Kenny soon opened a five-point gap and although Thomas Fahy was asked to scramble a Ben Cooney effort off his line Borris-Ileigh progressed to the decider with five points to spare. Spare a thought, however, for the Burgess lads: they gave this contest everything they had and to see the distress etched on the face of whole-hearted players like Johnny Mulqueen after this semi-final was heart-breaking.