If anybody thought that hunger might be a real asset Upperchurch Drombane possess over Drom-Inch when they face off in Sunday's Centenary Agri Mid Tipperary senior hurling championship final, they had better think again.

“We will be as hungry as the 'Church are for it and we have a lot of lads who would be looking for a first mid final. Upperchurch are fighting for their first one but we have lads fighting for their first one as well and we have lads on our panel who want it as much as they do. We have been there on the big day before and we know what it means to the club when we do win it – mid finals mean an awful lot to our club,” David said.

The final in Littleton at 3:00pm on Sunday will be Upperchurch Drombane's fourth in ten years, but they have yet to breach the finish line with their noses in front. Perhaps this could be the year, and what a year it would cap for their captain and leader James Barry, who won a second All-Ireland medals with Tipperary in August.
“The finals are coming more regularly for us now and we have experienced if before and that is good for our young lads to have already gone through it. It's big for our club to get there and hopefully we can take it a step further and just get over the line. We'd love to be able to do what Drom-Inch have done where they won a mid final and then pressed on and won more and more. And, that's what we are hoping for. If we win on Sunday we keep our season going for another while but we'll have a mid title which would be tremendous for us,” James said. 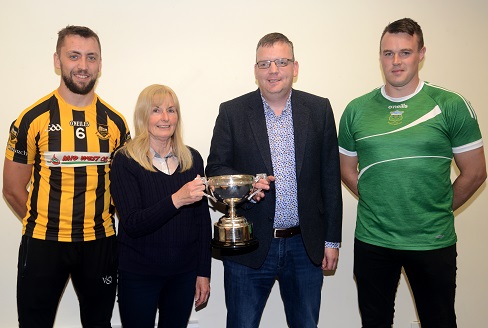 His Manager John Ryan is looking at the bigger picture too, and realises that while winning a mid title would be enormous for the club, it would also link them back into the county championship.
“If we win on Sunday we are back into the county championship and that is a big thing for us. To have that link is vital for the teams which have not already qualified for the county championship. We would always set our goal at the start of the year to win a mid final, but it is a great opportunity to go further after the final if we were to win. We will be without Matt Ryan and he is a big loss. He is a tough, uncompromising full back and what you see is what you get with him. It's a big disappointment for him,” John said.

Drom-Inch Boss Seamus Kennedy wants to keep the winning habit going and says that while it has been a great year for the club with Seamus Callanan making history as the first man from the club to lead Tipperary to an All-Ireland, winning the mid final would be a massive boost to confidence.

“We set our stall out at the start of the year to try and win everything in front of us. When we had qualified for the county championship we still wanted to win the mid – you cannot beat having matches to try and get a momentum going. It's great for confidence. We wanted to keep winning if we could. It has been a great year for us, a history making one with a senior captain bringing back the Liam MacCarthy Cup was unreal. And, we'd love it to continue on Sunday by winning the mid final,” he says.

Referee Johnny Ryan will throw in the ball for the first mid senior hurling final in Littleton in 33 years, at 3:00pm. It promises to be a intriguing battle.