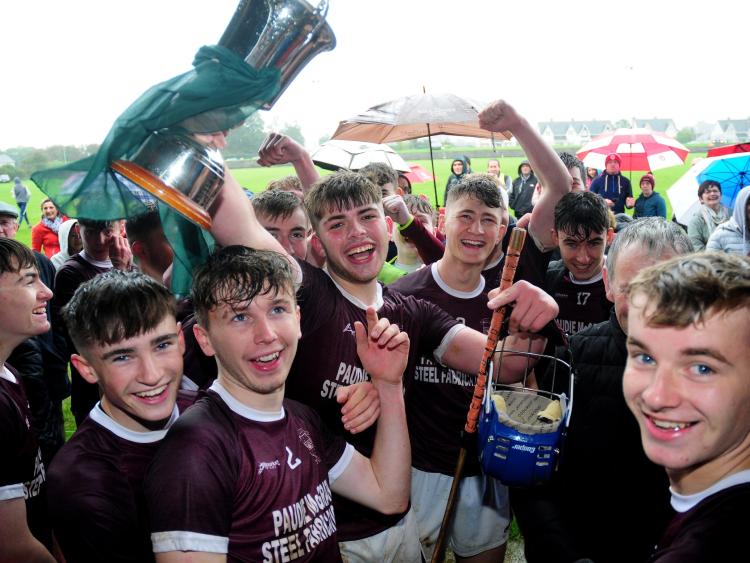 Borris-Ileigh hurling got a great boost with the win of their minor hurlers over Arravale Rovers in the FBD Insurance County Minor B Hurling Championship final at Boherlahan on Saturday.

There was no question as to the merit of the victory. Apart from a slow start - when they fell 0-4 to 0-1 behind after thirteen minutes - Borris-Ileigh were the better side all the way and were eight points clear when Arravale, who battled gamely to the finish, got their goal in injury time with the destination of the Broderick Cup well beyond dispute by then.

Heavy rain and a fresh downfield breeze made life difficult for the teams and initially Arravale, with the aid of the elements, enjoyed the better of things. Eogan Lonergan (two) and Johnny Ryan (two frees)v got their scores with JD Deveaney replying for Borris-Ileigh.

The possibility of a surprise outcome was on the cards, but gradually Borris-Ileigh settled with Kevin Maher starring at centre-back and JD Devaney leading the attack with purpose - by the 24th minute they were level (0-5 each).

Eddie Ryan nudged Borris-Ileigh ahead before the crucial score of the game arrived when Cathal Hogan goaled for Borris on the stroke of half-time following a Colm Boyle delivery.

Eoghan Lonergan’s third point left Rovers trailing 0-6 to 1-6 at the interval, but with the wind and the rain to be faced their situation was precarious.

The second half belonged to Borris although it took them some time to put daylight between themselves and the Tipp town boys. They inched further ahead with points from Kevin Maher (two frees) and Fintan Holland to which Caleb Hickey replied for Rovers.

A couple of Johnny Ryan points at the start of the last quarter suggested a Rovers rally was about to unfold, but some slack finishing by Rovers and a couple of Eddie Ryan points for Borris-Ileigh snuffed out the threat.

Borris-Ileigh were enjoying their unassailable position - eight points up with the game going into injury time - when Rovers eventually got the goal that they needed much earlier; Johnny Ryan appeared to apply the finishing touch following a goalmouth scramble. The goal arrived too late to make any real difference.

So a return of the title to Borris-Ileigh after a considerable lapse and with some very talented players in their squad it augurs well for Borris hurling in the coming years. In Kevin Maher at the heart of the defence and JD Devaney leading the attack they had the two best players on the field, lads who surely have bright futures ahead of them.

They were not the only stars as James Kelly, John McGrath, Adam Galvin, Colm Boyle, Micheal Ryan and Eddie Ryan all turned in eye-catching performances.

Arravale gave it everything, but came up well short of what was required. Their attack, with the exception of Eoghan Lonergan, posed no real threat and, once again, inter-county star Johnny Ryan was their main source of scores.