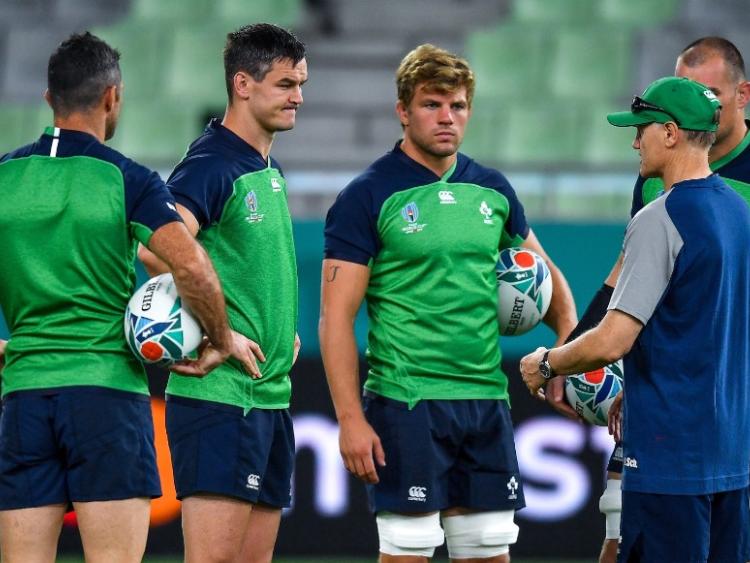 No Kearney but Ireland name strong team for Samoa test

Ireland centre Robbie Henshaw will make his first appearance of RWC 2019 after being named in the team to face Samoa on Saturday, in a game described by coach Joe Schmidt as “business as usual” - despite uncertainty over the key Japan v Scotland fixture in the same pool.

Henshaw, 26, sustained a hamstring injury in training shortly after Ireland’s arrival in Japan but the highly rated Leinster player was given time to recover and joins Bundee Aki in a team that looks close to full strength.

No matter what happens in the Japan v Scotland game scheduled for Sunday in Yokahama – should it not be a casualty of Typhoon Hagibis – a bonus point-win for Ireland at Fukuoka Hakatanomori Stadium would guarantee them a place in the quarter-finals.

After training on Thursday, the Ireland squad learned that the two other matches scheduled for Saturday have been cancelled, with a question mark over the other game in their pool the following day.

“There was a lot of talk amongst the players post training when we found out,” Schmidt said, adding: “We’ve got to make sure that our game gets finished with the right result for us.”

Half-backs Johnny Sexton and Conor Murray will start their 55th Ireland test together, equalling the record set by the Ronan O’Gara and Peter Stringer partnership.

Schmidt said full-back Rob Kearney was managed in training this week, so Jordan Larmour returns to the starting line-up, having impressed against the Scots when Kearney was also carrying a niggle.

The in-form winger Keith Earls will start his third consecutive game on the right flank, with Jacob Stockdale lining up on the left.

Seven of the eight forwards who started Ireland’s only impressive performance of the tournament so far – against Scotland in the opening game – will face the already eliminated Samoans. The exception is Peter O’Mahony, who is on the replacements bench.

“We’ve gone with the guys who could give us the best preparation into the game,” Schmidt said at the team announcement on Thursday. Centre Garry Ringrose started the first three pool games and the coach added: “You can’t expect people to keep on keeping on. Robbie (Henshaw) is fresh and we’re excited to have him in there.”

While Ireland know that a five-point return from the fixture will guarantee them at least second place in the pool, they will be acutely aware that a victory without a bonus point could potentially see them miss out.

In any case, they will have to wait until Sunday before knowing their fate. Should the Japan v Scotland game fall foul of Hagibis, the hosts would top the pool and Ireland would face a quarter-final against holders New Zealand on Saturday, 19 October.

“It’s not something I can control,” Schmidt said of the disruption caused by Typhoon Hagibis. “I only know what we need to do. It’s a situation nobody wanted to have and there will be a couple of teams that are massively disappointed.”

“From that perspective that’s disappointing, but from our perspective, all we can do is what we can control.”