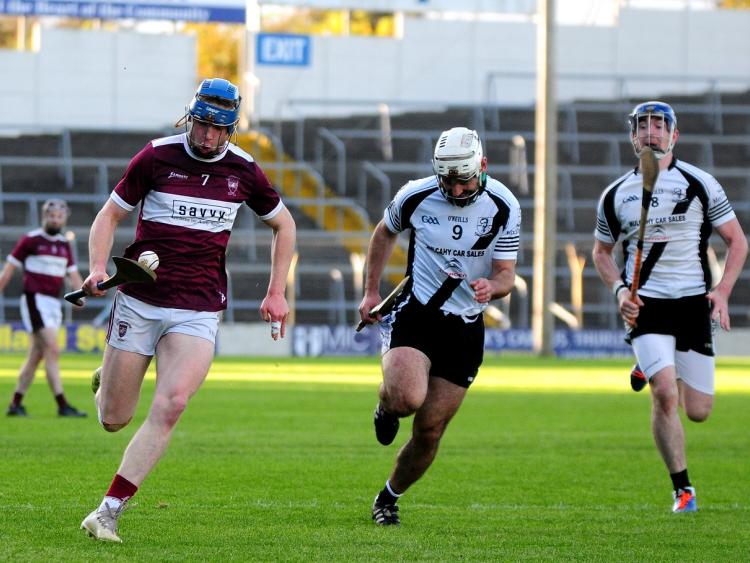 Conor Kenny hit seven points from play in a score-taking master-class as fourteen-man Borris-Ileigh shaded a tight, but disappointing contest against Kilruane MacDonagh's in the FBD Insurance County Senior Hurling Championship semi-final at Semple Stadium, Thurlres on Sunday before 5,478 spectators.

Much was expected of this encounter, but for the most part it was scrappy with very little developing in the line of match strategies or quality play and it was only during the latter stages that the crowd got engaged, the earlier part of this semi-final elicited no more than a funereal murmur.

After such a close contest, the losers will always have some regrets and Kilruane’s biggest in this instance will be the absence of inter-county man Jerome Cahill who was sidelined with a hamstring injury. Darragh Peters deputised in the enforced side reshuffle and one can only speculate as to the difference Cahill’s presence would have made. Against that they got a break when Niall O'Meara succeeded in having his red card from the quarter-final against Clonoulty-Rossmore lifted and he was one of their most influential players all through.

For Borris-Ileigh’s part they deserve great credit for the manner in which they overcame the setback of having defender Liam Ryan sidelined in the 43rd minute for a second yellow card.

At that stage they were 0-10 to 0-9 ahead and were enjoying slightly the better of things, but with Kieran Maher dropping back from the attack and Jack Hogan proving a lively substitute when introduced at that stage, they made light of their numerical disadvantage as the tension increased with full-time approaching.

Essentially, Conor Kenny was the difference between the sides and his five second half points (he got two in the first half) more than anything else drove Borris-Ileigh on to their place in the final for the second time in three years. He was superb in the air, fetching some great deliveries and then had the skill to translate possession into vital scores. Kilruane never got to grips with him or curbed the threat he presented.

Another factor crucial to the Borris-Ileigh win was the manner in which Paddy Stapleton at full-back policed Kilruane’s Brian O'Meara. Initially, Kilruane sought to exploit O'Meara’s advantage in height and physique, but experienced former inter-county man Stapleton dealt efficiently with all they fired at him and along with Kenny made a major contribution to the Borris-Ileigh win.

Kilruane were the better side in a low-key first half, but yet were only one point ahead (0-7 to 0-6) at the break. They saw a Kian O'Kelly shot for goal foiled by the woodwork in the seventh minute as they settled in better than their rivals with points from Cian Darcy and Kieran Cahill. A goal then might have led to a different game.

Jerry Kelly’s beautifully-struck sideline ball from seventy yards opened Borris-Ileigh's account and by the end of the quarter an improving Borris-Ileigh were on terms at 0-4 each - Kevin Maher (two) and Conor Kenny were the other scorers.

Kilruane once more seized the initiative with a brace of Cian Darcy points and another from Kieran Cahill, but with the half ebbing Conor Kenny and Kevin Maher had Borris-Ileigh points to leave things very much in the balance facing into the second period.

There was not much in the line of championship fervour in the first half exchanges and given how poorly they had played, Borris-Ileigh were probably the happier at the break to be only one point down. They upped their game on resuming, forging ahead with two Kevin Maher points in as many minutes. Ray McLoughney countered for Kilruane, but Brendan Maher and Conor Kenny tipped the scales in Borris-Ileigh's favour once more after thirty-seven minutes.

Niall O'Meara surged upfield for a Kilruane point and then came Liam Ryan’s dismissal for a second yellow card offence. Advantage Kilruane, one would have thought as Cian Darcy levelled for them facing into the last quarter.

It was now that Conor Kenny really came into his own - three points in six minutes supplemented by another from a hitherto rather subdued James Devaney had Borris-Ileigh 0-14 to 0-11 ahead with eight minutes to play while Justin Cahill landed his second for Kilruane.

Kilruane are not quitters and Conor Cleary and Cian Darcy points had them breathing down the Borris-Ileigh necks with four minutes to play - Niall O'Meara was now leading their attack.

Another Conor Kenny special followed to which Cian Darcy responded before, on the hour mark, Brendan Maher pointed a free to restore the two-point advantage for Borris-Ileigh.

At this stage Kilruane went for broke and threw everything into attack, but Borris-Ileigh held firm - their only concession being a Justin Cahill point in the 65th minute.

The clock was against Kilruane now and Borris-Ileigh held their nerve to claim their spot in the final against Kiladangan.

A quarter-final win over neighbours Drom & Inch and now this victory over Kilruane endorses Borris-Ileigh's championship credentials, if endorsing they required, and wouldn’t it be a nice double to add the Dan Breen Cup to the minor B county title won a few weeks back.

Two of that minor side - Kevin Maher and James Devaney - were in action in this semi-final. However, it was Conor Kenny who was the star of the show with Paddy Stapleton, Brendan Maher, Jerry Kelly, Seamus Burke and Dan McCormack also contributing handsomely to the win.

It was frustration for Kilruane for the second year running as they seek to recapture former glory. Certainly Jerome Cahill’s absence was significant, but they still had enough of the play to have pulled off a victory. An under-performing attack, however, failed to capitalise on the possession they enjoyed and posed little goal threat.

Craig Morgan and Niall O'Meara were towering figures in defence with Justin Cahill and Ray McLoughney shading the midfield battle. Cian Darcy was their main score taker and Kieran Cahill also did well but not enough was seen of their attacking colleagues.