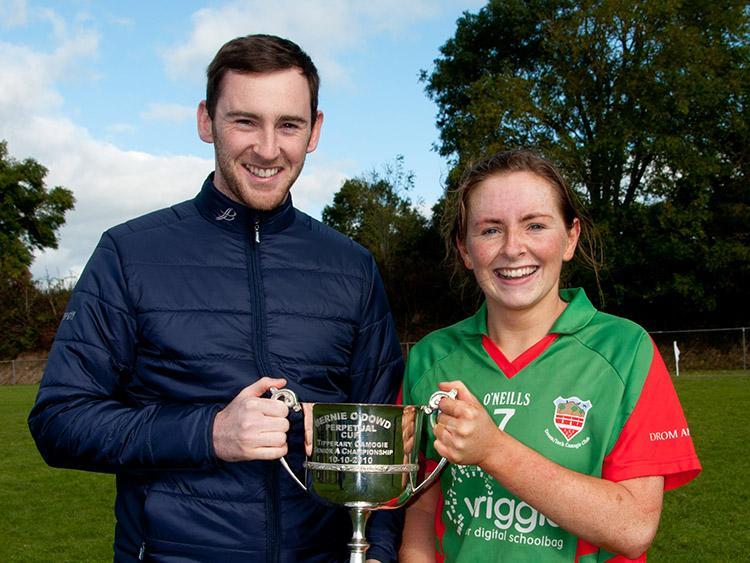 A mere week after winning the county senior camogie championship final Drom & Inch made the trip to Glanmire in Cork to take on the home side Sarsfields in the Munster Senior Camogie Club Championship semi-final. And, after a nail-biting encounter, when there was never more than three points between the sides, it was an heroic Drom & Inch team who finished the strongest and secured victory by the smallest of margins.

The opening ten minutes began at a frantic pace with end-to-end action as both sides looked to lay down an early marker.

It was, however, the Tipperary outfit who found the scores easier to come by and led four points to one with fifteen minutes thanks to two points from Eimear McGrath (one free) and a point each from Niamh Long and Joanne Ryan.

At this stage Sarsfields were finding it difficult to break down the Drom & Inch rear-guard with the half-back line of Eimear Cahill, Maurean Ryan and Aoife Mcgrath starting very impressively. However, two minutes later this all changed when experienced full-forward Emer Fennel found the back of the net. Her initial strike was brilliantly saved by Caoimhe Bourke in the Drom goal, but the defence failed to clear their lines and when Fennell got a second chance she made no mistake.

Following another point from Sarsfields the home side led 1-2 to 0-4.

Amazingly Drom & Inch never regained the lead again until the final minutes of the game when they showed real determination to clinch the match.

The second half was another tight and tenacious affair.

Neither side could manage a couple of scores in succession to push ahead and instead it was point-for-point.

For Drom & Inch Joanne Ryan was the real danger woman in attack causing Sarsfields all sorts of problems and finishing with four points from play.

Miriam Campion worked very hard throughout the hour and also got on the scoreboard.

In defence Eimear Cahill gave a tremendous display at wing-back while Aoife McGrath on the opposite wing covered a ferocious amount of ground and was the launch pad for many of Drom & Inch’s scores.

Sarsfields, who were backed by a large home support, were young and fit and enjoyed plenty of possession, but crucially hit some poor wides during the second half.

The introduction of Antoinette Kennedy for Drom & Inch in the final quarter had a huge impact as both sides started to tire. Antoinette slotted brilliantly into the half-forward line, winning vital possessions and scoring a superb point to level proceedings before an Eimear McGrath point in the 57th from a 21-yard free finally forced Drom into the lead.

And, Drom showed great fighting spirit and discipline during the final minutes as Sarsfields launched attack after attack.

Mairead Eviston was excellent while Deirdre Dunne and Niamh Treacy were also back helping their backs and clearing crucial ball.

As the final whistle blew it was delight all around for the Drom & Inch players, management and the large crowd that travelled as the Tipperary champions celebrated booking their place in the Munster final.

The Munster final will take place on Saturday November 9 versus the Clare champions Scariff-Ogonnelloe who defeated Limerick’s Newcastle West in the other semi-final.