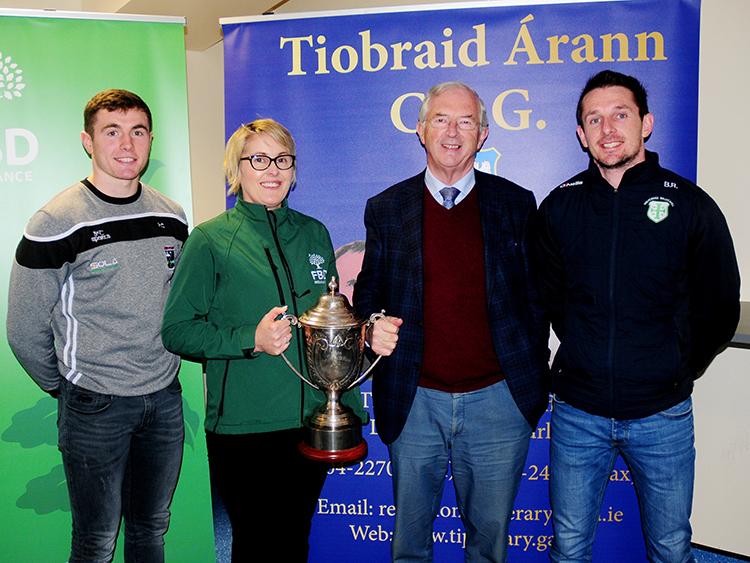 There is simply no doubting the fact that both Holycross-Ballycahill and JK Bracken’s are emerging as serious hurling powers - the problem is that when these Mid Tipperary rivals collide in the FBD Insurance Séamus Ó Riain Cup final at Semple Stadium on Sunday (12.15pm) only one of them can walk away with the ultimate prize.

JK Bracken’s and Holycross-Ballycahill progressed to the final of the FBD Insurance Séamus Ó Riain Cup thanks to their respective semi-final victories over Mullinahone (1-22 to 2-14) and the Templederry Kenyons (0-29 to 3-17). Holycross-Ballycahill got the better of Carrick Swans in the quarter-finals (0-19 to 0-16) and JK Bracken’s proved far too strong for Ballingarry (1-23 to 1-8).

Holycross-Ballycahill manager Michael Ryan finds himself working alongside a management team which features coach Brendan Ryan and selectors Paul Galvin, John Ferncombe and Liam McCullagh. And, the Fethard man has praised his players for all that they have achieved this season.

“It's brilliant for the panel of players and the people of Holycross to be back in Semple Stadium on county final day,” Michael Ryan told the Tipperary Star.

“It's a wonderful achievement and it is just rewards for the work that the boys have done this year; they richly deserve to be there.”

Holycross-Ballycahill’s key game materialized at the semi-final stage when Michael Ryan’s men fought back from eight points down to beat the Templederry Kenyons 0-29 to 3-17 thanks to a “savage performance”.

And, while everyone on the Tipperary club admires the work carried in Holycross in terms of facilities manager Michael Ryan argues that club people also want to see their team performing.

“It's a stand-out club to be honest,” Michael Ryan explained.

“I am honoured to be involved with them and I consider myself very lucky to be involved with them. The facilities that are over there and the work that has been done by people back down the years to give you what you now have in Holycross is tremendous. But I think that a lot of those people will take great satisfaction to see Holycross back in a county final in Thurles. You can have all of the facilities, but at the end of the day we all like to be here on county final day and supporting our own team.”

One of the individuals who has poured themselves into the Holycross-Ballycahill project is team coach Brendan Ryan who has worked hard to develop a whole generation of players.

“It has been a great year so far,” Brendan Ryan told the Tipperary Star.

“In fairness to our players I could not compliment them enough - we have thirty-four on the panel and the training that they have done has been outstanding. They have really bought into what we have been doing and I am delighted for them that they have got their reward.

“They are an absolute pleasure to coach - they soak up information. It might not always work out perfect, but they will try to put into practice what they are being asked to do. There is never an issue with them.”

Brendan Ryan, however, was also eager to flag the quality of the JK Bracken’s team.

“I have seen (JK) Bracken's five times this year and they have been very impressive,” Brendan Ryan explained.

“They were very unlucky against Drom (& Inch) in a Mid semi-final. JK Bracken's are a really good team this year. They have impressive levels of fitness and they are a real good hurling team.”

Irrespective of the challenge posed, however, Holycross-Ballycahill team captain Michael Doyle insisted that the players were looking forward to the final: “We are all looking forward to this one. Every player wants to play in Semple Stadium on county final day. We have not been there in a long time in a competitive championship game and we are all just delighted to be back playing on the big day. It means everything to us. It means everything to myself; the club and the family. Everyone from Holycross will be there in force.”

Similarly to Holycross-Ballycahill JK Bracken’s mounted a comeback in their semi-final against Mullinahone when battling back into contention from seven points down to win 1-20 to 2-14.

Paudie Bourke manages the JK Bracken’s team alongside selectors Peter Maher and Pádraic Keely, but at a recent press event club legend and chairman Eamonn Corcoran was rolled out to speak on behalf of the Templemore club.

“For the last number of years we have been there or thereabouts so, number one, it's great to get back into the Dan Breen (Cup) and, number two, to get to represent the club on county final day,” a thrilled Eamonn Corcoran revealed.

“We have been very fortunate during the last number of years to have good minor teams coming through. The under-21s have also done well. Séamus O'Dwyer was the chairman before me; we are very fortunate to have a great committee and Aoife Percy, as secretary, does great work for the club. At the end of the day it's about bringing young lads through and it's fantastic now to be getting a chance to get out there on county final day and represent the club.”

The Our Lady’s Templemore team which won the Dr Harty Cup (Munster colleges) and Croke Cup (All-Ireland colleges) in 2017 featured plenty of JK Bracken’s men and their influence of this emerging hurling force is obvious.

“We are always looking for leaders who can step up,” Eamonn Corcoran explained.

“When the lads won the Harty Cup it was great for the club and for the school. They are all still playing for us at the moment and they are the back bone of the team.”

JK Bracken’s team captain Paddy Cadell is one of those “leaders” and he can’t wait to lead out the Templemore lads at Semple Stadium.

“It's definitely going to be a great occasion. Any time that you get to play on county final day in Thurles and with a big crowd there is great. And, it's great to do that with the club lads that you have grown up alongside,” Paddy Cadell said before revealing that there is a “great spirit” about the JK Bracken’s team facing into Sunday’s final.

“There is a great spirit there at the moment, definitely,” Paddy Cadell said.

“All of us are really enjoying our hurling. And, I suppose when you go on a bit of a streak of wins like we have done over the last while the whole thing gains momentum. There is a great excitement about the club at the moment. We love these knock-out championship games when you get a chance to show off what you have been training to do all year.

“I would expect Holycross to be more than marginal favourites. They have a top quality side with the likes of Darragh Woods, Bryan O'Mara and Cathal Barrett. These lads have all proven it at inter-county level. We are under no allusions - it is going to be a massive task for us to win the final.”