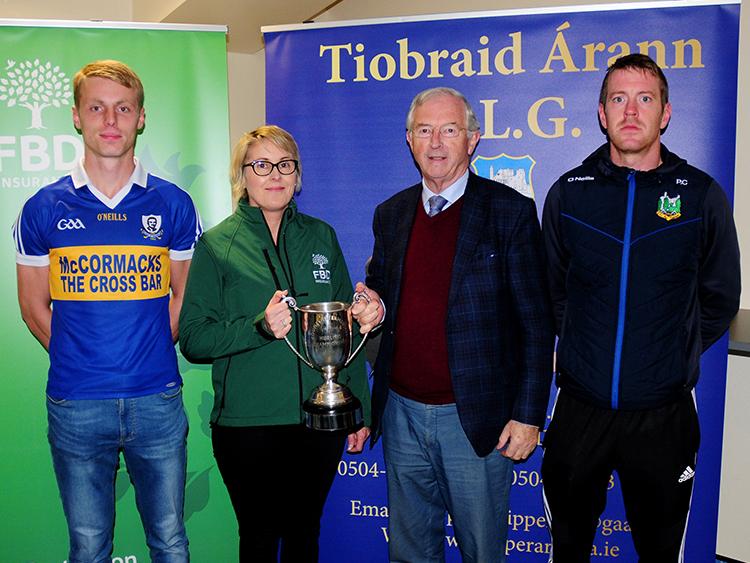 Two extraordinary clubs will clash at Littleton on Saturday, November 2 when Seán Treacy’s take on Kiladangan in the final of the FBD Insurance County Intermediate Hurling Championship (2.30pm). And, the key to understanding both outfits is that when Seán Treacy’s and Kiladangan take to the field they are playing for something much more significant than just the result. First and foremost both sets of players want to represent their parish to the very best of their ability - the result will look after itself.

Seán Treacy’s and Kiladangan were promoted to the Séamus Ó Riain Cup (Roinn II of the FBD Insurance County Senior Hurling Championship) following their respective semi-final wins over Kilsheelan-Kilcash (1-18 to 0-12) and Golden-Kilfeacle (0-14 to 0-12).

Additionally, Kiladangan will field two senior teams (one in Roinn I and one in Roinn II) next season while Seán Treacy’s will represent Tipperary in the up-coming Munster Intermediate Hurling Championship since Kiladangan are a senior club.

And, if you are searching for the reason why Kilsheelan-Kilcash inter-county star Mark Kehoe could only manage one point (from a free) against Seán Treacy's you will find the answer in Seán Treacy’s captain Seán Hickey. Leaders make teams and Hickey is one.

Seán Treacy's are managed by the very accomplished Natal O’Grady (Patrickswell, Limerick) who works alongside selectors Séamus Butler, Michael Hanly and Tom Ryan. O’Grady is an outstanding coach, but there is very little the Limerick man can do without leaders to drive the project forward like Seán Hickey.

“The facilities that we have in our parish are the envy of any parish in rural Ireland. We have an all-weather field, we have an Astro turf area, we have a fantastic field, we have a gym and we have a club house which is state-of-the-art,” Seán Hickey told the Tipperary Star.

“It's great and everyone chips in in our parish; whether that is in terms of money or selling lotto tickets. And, people are very generous with their time. Everyone comes together and that's the one thing about the people in our parish; they support their own, they look after their own area and they take great pride in their own area.”

And, in Sunday’s county final Seán Hickey and his teammates want to repay the efforts of those people; they want to go out and represent those people with pride.

“We want to represent them with pride - that's what we want to do,” Seán Hickey said.

“We only have a panel of twenty-two or twenty-three, which is very small numbers and we go from maybe eighteen years of age up to maybe forty-two or forty-three. We all stick together and we are great friends off the field as well. We all help each other out. Everyone is putting in 110%. When we go out on that field there is no one going out with a personal agenda or anything like that. Everyone is there for the betterment of Seán Treacy's. And, that's the best thing about it.

“It makes a massive difference for young and old. A lot people wouldn't realise it, but in our parish it takes a long time - over half an hour I'd say - to go from the top of Rearcross down to the bottom of Hollyford. Rearcross people would nearly be inside in Limerick city before they would be down in the bottom of Hollyford so (a hurling team) brings the young and old from the four corners of our parish together. And, it's unique: it's the only thing that is able to do that. It's just bringing great joy to everyone and we want to keep it going now. We have nothing won yet and our season will be defined by our county final (display).”

Meanwhile Seán Treacy’s club chairman Billy O'Toole revealed that after a “tough few years” the people of the club are looking forward to Saturday’s county final.

“It's great for the parish,” Billy O’Toole explained.

“We are delighted to be back up into senior hurling. There is a lot of work gone into it down (through) the years by a lot of great people. A lot of people have put in a massive, massive effort with the young lads to bring them on. People have tried to put facilities together and we have some fine facilities now up there now.”

Billy O’Toole also revealed with a smile that the Seán Treacy’s team and their supporters did not want to leave Leahy Park in Cashel after beating Kilsheelan-Kilcash in the county semi-final - the feelings that day were very powerful.

“It was just unreal and it is not even sinking in yet. We didn't even want to leave Cashel - we hated leaving the place because we just wanted to soak it in. It was great for the team, the club and the supporters,” Billy O’Toole said.

The story of the Kiladangan club is an extraordinary one. For decades they were also-rans in North Tipperary, but then a group of ambitious people came together and got to work. From nowhere Kiladangan have developed themselves into a powerhouse of club hurling - they only won the county intermediate hurling championship as recently as 2004 before progressing on to win the North Tipperary Senior Hurling Championship in 2008, 2013, 2015, 2016 and 2019.

And, while their senior side will take on Borris-Ileigh in Sunday’s county senior hurling championship decider the performances of the intermediate team has ensured that Kiladangan will field two senior teams next season. The club celebrated that extraordinary achievement when beating Golden-Kilfeacle 0-14 to 0-12 in the recent county intermediate semi-final.

Intermediate team manager Dermot Hogan spoke at a recent press event to promote the forthcoming county final and in him we can locate the secret to Kiladangan’s success. Here is a quality guy who endured the bad days before featuring as goalkeeper on the Kiladangan team which won the county, Munster and All-Ireland intermediate titles during the 2004 season.

Dermot was there too in 2008 when Kiladangan fought back from ten points down to beat Burgess in one of the most enthralling North finals ever witnessed. And, now here is Dermot Hogan working hard and willing to give back to the club that has given so much to him.

“I suppose a lot of work was put in maybe ten years ago and we are reaping the rewards there now with the players coming through. We had a few right lads there over underage teams; the youngsters are coming through and there just seems to be a conveyor belt of talent at the moment.

“There is no substitute for hard work in my eyes. We had the right people over the right teams when I was a youngster coming through - you know just really good people.”

For Dermot it is the quality people that make the essential difference: “yeah, I think it is just massive. If you have the right lads coaching lads to hurl the right way and do the right things on the field I just think that's massive”.