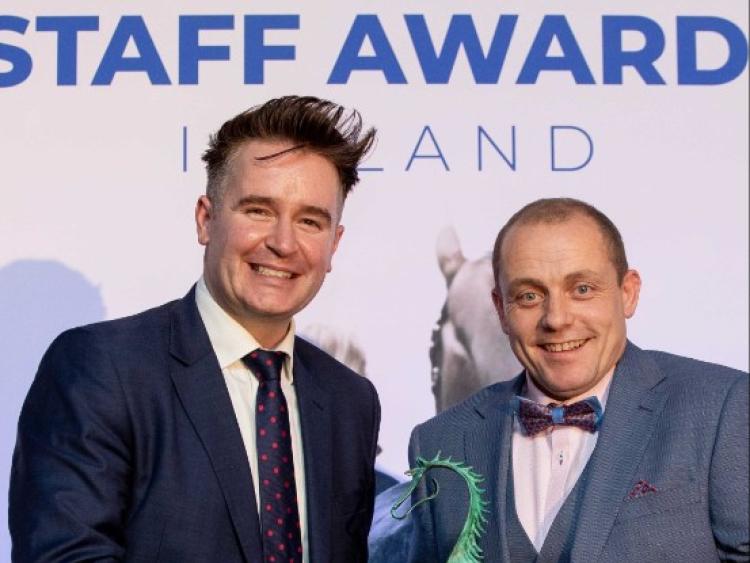 Tony O’Meara was among the award winners at the Godolphin Stud and Stable Staff Awards which were held in the Killashee Hotel, County Kildare this week.

O’Meara, a Stallion Manager at the world-famous Coolmore Stud in Tipperary, has been with the stud for over 20 years and manages a stable of 14 of the world’s best stallions, including Galileo, the most successful stallion in the world.

In his role Tony organises staff rota for the 14 people under his care. He also liaises with vets, farriers and specialists, ensuring stallion parades are run in a safe and efficient manner. Tony also manages the quarantine and shuttling of Coolmore’s stallions to the southern hemisphere.

Previously, as a yearling manager for the farm, he was responsible for breaking both dual Derby winners, Camelot and Australia.

Tony said: “To break in two Derby winners and to watch them come back to the stallion sheds at Coolmore is very special. I love watching them go all the way through their careers and I think the team and I spend more time with the horse than our families!

"It’s a cliche but I’ve to pinch myself going to work every day, and to get an award for it tonight is very special.”

A total of ten awards, worth €84,000, were presented by well-known blogger and comedian, Jarlath Regan.

David Jennings, Editor of the Racing Post in Ireland, acted as MC for the occasion.