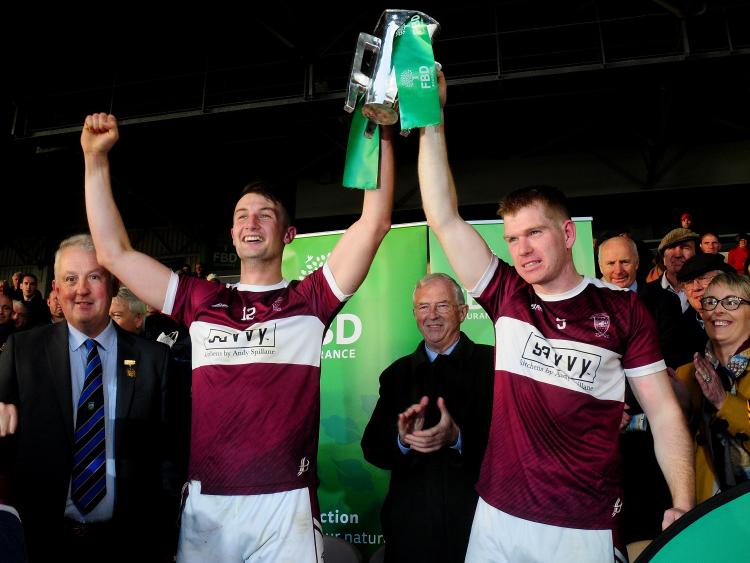 Game changers come in different forms and county final winners emerge for different reasons -on Sunday, the explosive form of James Devaney was one of the differences

Strains of 'My Lovely Fair Ileigh' reverberated throughout the bowels of Semple Stadium as the Dan Breen Cup was carried into the victorious and delerious Borris-Ileigh dressingroom.

Leading the Borris' anthem was Timmy Delaney – one of the driving forces of the county senior hurling final victory 33 years before; grandfather to current star Jerry Kelly who bagged 0-3 from play in the final; and a dyed on the wool maroon and white man whose melodic lilt was tested to the maximum when he was shouted down by the ever-growing throng.

Tom Semple's stadium shook with the emotion of the rendition with Delaney telling the captivated and packed inner sanctum that he never thought he would live to see the Dan Breen Cup back in the possession of Borris-Ileigh. There had been a few false dawns alright with 2017 the most recent. But on this November Sunday the stars aligned and the Holy Grail was reached once more.

A year and a day previously the club hosted a massive fundraising drive to assist one of their own, the late Amanda Stapleton. Since then, Amanda – sister of full back Paddy – has passed away. And, the parish has known considerable heartache and pain in the last twelve months with five tragic deaths of young people rocking folk to their very core. Losing a county final pales into insignificance when compared to these losses, but winning one does help to put a smile on the faces of the bereaved -for a while at least.

So it was on Sunday and in the days since. Borris-Ileigh has been on fete and Coach Johnny Kelly has been inducted the Hall of Fame already occupied by Thurles man Paddy Doyle, who masterminded the 1986 victory, which was followed by Munster and All-Ireland Club glory.
Immediately after the game, thoughts of the Munster club championship were far from their minds, but as the hours wore on, their next opponents Glen Rovers began to drift into conversation. Of course they'll give it a right rattle next Sunday – why wouldn't they.

Mind you, if Borris' come to Thurles next Sunday and execute their game plan with the same ruthless efficiency as they did on county final day, they'll be very hard to beat. Their preparations proved spot on and they arrived primed to strangle Kiladangan; didn't allow them to space or time to get into their flow; and crucially, they created and took their own chances when they arrived.

Game changers come in different forms and county final winners emerge for different reasons. On Sunday, the explosive form of James Devaney was one of the differences. His tender years betray a hurling maturity which his grandfather Liam would have been proud of – Devaney's goal in the 32nd minute of the first half was sublime as he won the ball under Ardan Ui Riain, swiveled, shimmied and took off, before firing an initial shot which was deflected and then burying the follow-up with a ground stroke to the corner of the Town End net. Devaney finished the game with 1-4 to his name, a feat made more remarkable by the fact that he had been practically anonymous in the semi-final. The flip side rendered Conor Kenny scoreless in the final following his heroics in the semi-final – did he care after the game? Absolutely not.

The other winning factor was the desire and hunger shown by Dan McCormack in the last quarter. His workrate was massive and the manner in which he got around the pitch in that second half would have rendered many a GP's tracker out of battery in trying to keep up to him. But, it wasn't just that Dan was getting onto ball – it was what he was doing with it, which really counted. He was really positive and didn't waste a morcel of possession – a great showing by a man who epitomised the Borris' spirit.

Speaking of spirit – what about Paddy Stapleton? 'The Saint' might just be canonised alright in Borris-Ileigh as he rolled back the years to make the defensive unit almost impregnable. With the immaculate Brendan Maher hurling up a storm in front of him and James McCormack blocking penalties behind him, Borris-Ileigh had a massive platform from which to win this final – the Kiladangan goal being the exception as they got caught out with a long ball which went all the way through for Dan O'Meara to rattle the net after just three minutes of the second half.

Many will point to the defence as being Borris' strongest unit. They have certainly restricted opponents scoring rates with the McCormacks, Seamus Burke and Liam Ryan making up a sturdy sextet. But, with Dan and Tommy Ryan helping out from midfield and the half forward line also working from deep, Borris-Ileigh had the men to execute the plan devised by Philip Kenny, Martin Maher and Philip Maher – great Borris' servants all – and of course Johnny Kelly.
Jerry Kelly's three points from play were also crucial to this victory – his Dad Denis is a multiple county senior hurling final medalist with Toomevara, but it has been all about Borris'Ileigh these last few weeks.

Predictions of a tight game abounded before throw-in, but the reality is that Kiladangan did not perform as they would have wished – or perhaps, more accurately, they were not allowed to perform as they would have wished. That's a hard pill to swallow for them as this was their second final outing to come up short without showing their best. In sport not doing yourself justice in big games is just about as tough as it gets.
Without a doubt, Kiladangan had the chances – the early goal opportunity which fell to Billy Seymour, and the missed penalty were very costly. In tight games, it's very hard to win if you leave gild edged chances after you. They also had that effort cleared off the line by Borris' midfielder Tommy Ryan five minutes from time – a goal at that stage would have leveled the game and set up a grandstand finish.

But, it wasn't to happen and the famous Borris bantam cock was being readied for a gallop around Semple Stadium when referee Fergal Horgan called time on proceedings.
The new centre at Borris-Ileigh GAA grounds had it's unofficial opening on Sunday evening – what a way to celebrate a magnificent milestone. Not only have they built a monument to match their ambitions, they have laid the foundations to build on their latest, most famous win.