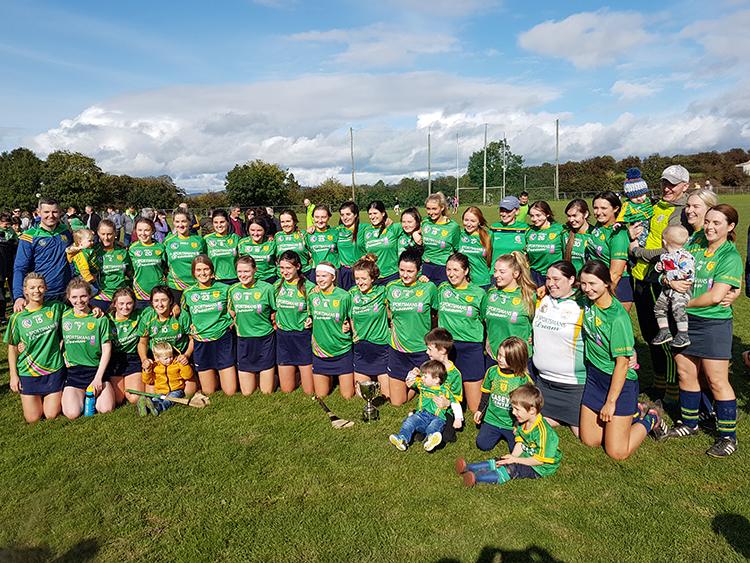 The Toomevara panel of players pictured celebrating after the Greyhounds beat Thurles Sarsfields in the county intermediate camogie final at The Ragg recently.

This Toomevara team did not deserve this cruel margin of defeat. Following a thrilling domestic campaign the Greyhounds progressed to the Munster Intermediate Camogie Club Championship final on merit, but in the decider they had to face Gailltír who are the Waterford senior champions. Gailltír, of course, featured in the All-Ireland intermediate final this season and beat Nenagh Éire Óg in the Munster intermediate decider as far back as 2016, but because of a special dispensation allowed to the Déise champions Gailltír are still permitted to compete at intermediate level.

Right from the start you feared for an out-gunned Toomevara team and with Gailltír playing with a driving breeze at their backs the Waterford senior champions raced into a thirteen-point interval lead.

In the interests of fairness something really needs to be done to address a grading system which allows this kind of miss-match to occur.

Ironically enough Toomevara enjoyed a terrific start at Cappamore when Aoife Ryan scrambled home a goal during the opening minute - sadly, twenty-two further minutes would elapse before Toome added to their tally.

Elaine Young landed a great point for Toomevara in the 23rd minute before ‘keeper Paula Ryan did especially well to deflect a rasping Annie Fitzgerald shot over the bar in the 24th. It is worth noting that Paula Ryan also conjured a terrific save to deny Annie Fitzgerald in the 16th minute while Aoife Fitzgerald found the side netting of the Toomevara goal in the eighth minute.

Annie Fitzgerald and Trish Jackman (free) added further points to the Gailltír tally and although Aoife Ryan hit back for Toomevara another Annie Fitzgerald point preceded an Aoife Fitzgerald goal in first half injury time (1-2 to 2-12).

Toomevara fought on gamely in the second half and everyone associated with the team will be delighted to note that the Tipperary intermediate champions managed to out-score the Waterford senior champions by four points (0-9 to 0-5) during the second half.

A Gemma McCarthy free preceded three more Gailltír points, which arrived courtesy of Emer Walsh and Annie Fitzgerald (two frees), before Toomevara enjoyed their most productive spell of the afternoon when firing five points without reply between the 41st and 51st minutes. Shauna Quirke launched this rally with a fine effort and Mary Flaherty added to her side’s tally before Gemma McCarthy converted three frees.

Efforts from Anne Corcoran and Emer Walsh brought the scoring to a conclusion from a Gailltír point of view before Aoife Ryan demanded a terrific save from Gailltír ‘keeper Ciara Jackman in the 56th minute. Gemma McCarthy converted the resultant ’50 and although still trailing by eleven points Conor O’Sullivan’s determined side honoured the traditions associated with the Toomevara club and battled right to the end. Indeed, Elaine Young demanded another top class save from Ciara Jackman during the closing minutes while Jill Anne Quirke was fouled for a late penalty which Gemma McCarthy lifted over the bar.