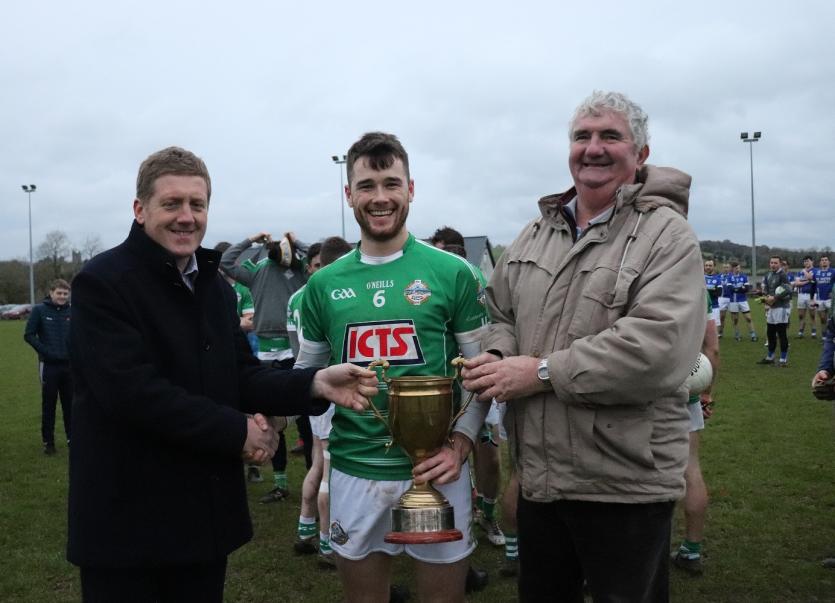 Just like in this year’s West intermediate hurling final Golden-Kilfeacle needed a late goal in injury time to force extra-time, but were comfortable winners during the additional twenty minutes in this year’s Shane Hennessy Agri-Advisor West Tipperary Intermediate Football Championship final on Sunday last in Annacarty.

Rockwell Rovers looked as if they had done enough in the sixty minutes, but a goal from a Shane O’Connell free in injury time ensured a further twenty minutes of play to determine the 2019 champions.

Played in cold, but dry conditions it was Golden-Kilfeacle who made the early running. Points from Josh Keane (two frees), David Wade and Keith Landy had them four points to the good by the ninth minute.

Rockwell Rovers were right back in the game two minutes later when Willie Flynn got his hand to the end of an attack to steer the ball to the net.

Rockwell Rovers then enjoyed a period of dominance. Alan Moloney pointed twice in a minute from a placed ball and play and TJ Ryan got his first to give Rockwell Rovers a two-point lead.

The game changed again with six minutes of the half to play when Aidan O’Connell found himself in behind the Rockwell Rovers defence, gathered possession and goaled.

Rockwell Rovers though held parity at half-time thanks to an Alan Moloney free and a point from Owen Cleary which gave them a slender one-point advantage at the break (1-5 to 1-4).

Golden-Kilfeacle were struggling in front of the posts, but Shane Stapleton did manage a point. TJ Ryan brought the gap back out to four points in the thirteenth minute. Rockwell Rovers were now well in control forcing turnovers and the Golden-Kilfeacle defence into mistakes.

Golden-Kilfeacle gradually found their way again and could have been closer, but for a series of wides from scoreable positions. Keith Landy finally ended their scoring drought with five minutes to play when he pointed from a free.

The first half of extra-time was a fairly close affair though Golden-Kilfeacle were appearing to get the upper hand. Seanie O’Halloran and TJ Ryan swapped points before a Keith Landy free put Golden-Kilfeacle back in front.

Golden-Kilfeacle, who had struggled for long periods to put a string of scores together, pulled clear on the resumption of the second period of extra-time with points from Sean Hayes, Keith Landy and Cian O’Connell to go seven points up.

Gavin Ryan did bundle the ball to net at the end for Rockwell Rovers, but that score proved a mere consolation as Golden-Kilfeacle ran out winners.