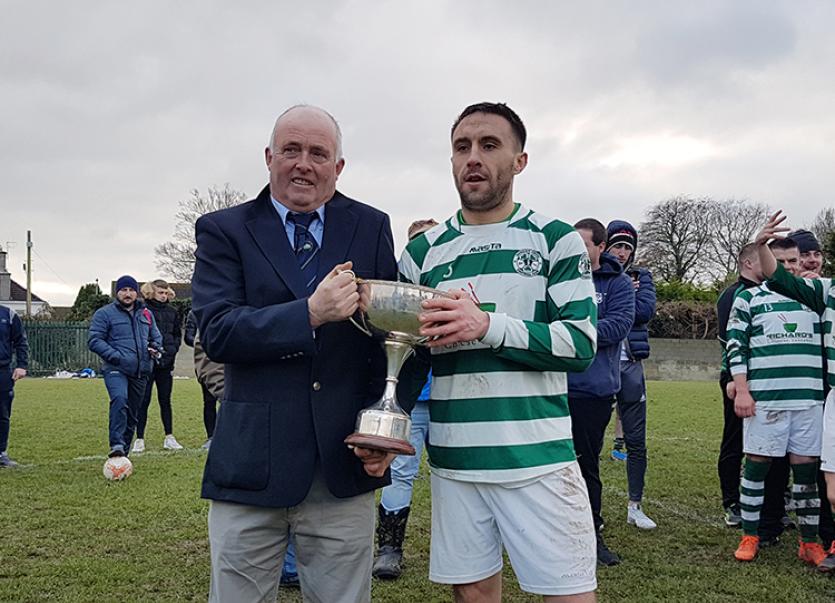 Nenagh Celtic were crowned North Tipperary & District League Premier Division champions following a dramatic clash with Killavilla United at Nenagh College on Sunday afternoon - Celtic only required a draw to secure the league title and retrieved a two-goal deficit during this entertaining affair.

Henry Newman’s side faced into their final league of the season three points clear of Borroway Rovers and four clear of defending champions Killavilla United - mathematically Celtic could still be caught by both Rovers and Killavilla and the home side appeared reasonably distressed when trailing United 0-2 at the break.

Nenagh Celtic, however, fought back brilliantly in the second half, earned themselves a 3-2 advantage and then endured a nervous end to this clash when Killavilla almost nicked a win late on, but the misfortunate Michael Cordial slipped when the centre-half enjoyed the opportunity to score the game-winning penalty. Had Killavilla won on Sunday United would then have faced Borroway Rovers in the final game of the season with the league title on the line.

Earlier this season Nenagh Celtic beat Borroway Rovers at home (4-2), drew against the Thurles side away from home (3-3) and also suffered one of their only league defeats away to Rovers (2-3). During the campaign Celtic dismissed Portumna three times (aggregate score: 13-1), beat Thurles Town twice (aggregate score: 7-0) and also drew with Thurles Town in Thurles. And, although Nenagh lost out initially to Moneygall (1-2) Celtic won both of their remaining encounters with Moneygall (aggregate score: 8-2). Indeed, Celtic’s most recent 5-0 win over Moneygall put Nenagh in prime position to claim the league title.

In their final league game Celtic were looking to complete the clean sweep over the defending champions having already beaten the Roscrea side 2-1 and 4-1 earlier this season.

Nenagh Celtic started well and should have taken the lead as early as the sixth minute when Mark Walsh was annoyed at himself for not heading home a Seán Healy delivery from close range.

Despite some sustained early pressure from the home side Killavilla United took the lead in the tenth minute when Michael Cordial curled in a glorious free kick into the bottom left hand corner from close on twenty-five yards. Then, just five minutes later, Paul Kirwan thundered home a header following a Cordial delivery and Killavilla United led 2-0.

And, United should have added to their tally in the 25th and 29th minutes when Celtic ‘keeper David Walsh did especially well to save a Paul Kirwan header and then Ruairí Murphy flashed a left-footed effort wide following smart work from Kenny Lee.

Nenagh Celtic also enjoyed an opportunity of note - Peter Hynes clipped a clever ball over the top in the 30th minute, but Killavilla ‘keeper Stephen Byrne deflected Jimmy Hynes’ effort out at the expense of a corner.

The Nenagh Celtic squad of players pictured celebrating alongside their management team.

The Nenagh Celtic performance improved significantly in the second half - the home side dominated right from the off and the champions-elect soon earned their reward.

The introduction of Szymon Popiela to the Celtic team at the break made a big impact on proceedings and his in-swinging corner caused consternation in the 61st minute; Killavilla half-cleared back to Popiela, he found Michael Hynes deep inside the United box, the Celtic captain knocked the ball across the face of goal and Peter Hynes scored (1-2). It certainly appeared as if Hynes had handled the ball into the net, but the goal was allowed to stand and two Killavilla players were cautioned following their protests.

Seven minutes later Nenagh Celtic were back on terms - in the 68th minute Jamie Kelly and Brian Mitchell combined well down the right, Mitchell swung in a great right-footed cross and Michael Hynes timed his run beautifully before thundering home a header (2-2).

Celtic were flying now and took the lead for the first time in the 82nd minute when Szymon Popiela’s in-swinging corner deceived Stephen Byrne in the Killavilla goal and Mark Walsh bundled home from close range (3-2).

Then, within sight of the finish line, Nenagh Celtic wobbled. With four minutes to play Denis Moloney fired in an equalizing goal (3-3) following Tom Aherne’s free kick while two minutes into injury time Celtic coughed up a penalty (handball). The misfortunate Michael Cordial slipped just as he endeavoured to convert the spot kick and dragged his shot left and wide.