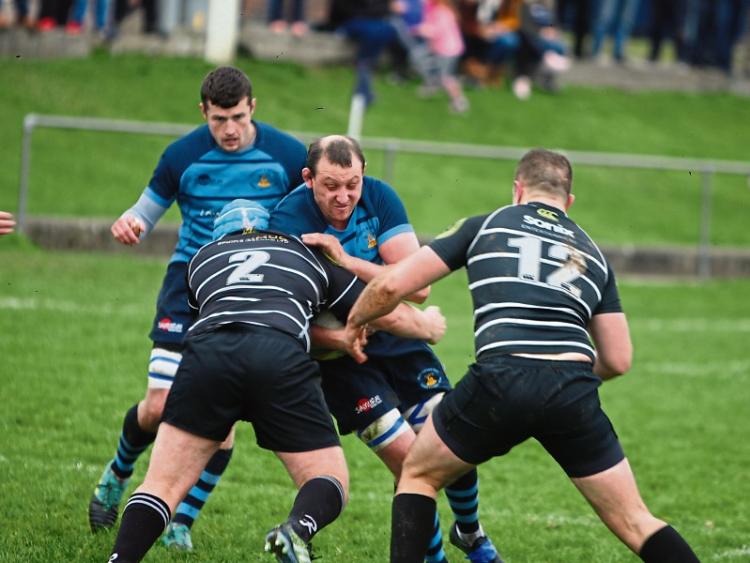 Kilfeacle forward Philip O’Connor tries to break through the tackle of the Kilkenny hooker in Sunday’s All-Ireland Cup quarter-final played at ‘The Hill’, which the home side won .

On Saturday last Kilfeacle and District RFC welcomed Kilkenny RFC to Morrissey Park for the quarter-final of the All-Ireland Cup and one of the largest crowds for some time assembled to watch what was  an enthralling game.

Kilfeacle and District RFC are currently top of their division in Munster Junior Rugby and are on a good run of form.

The team’s success becomes a double-edged sword and builds up a schedule of matches that doesn’t give the team a weekend off until Christmas.

Within four minutes of the start Kilfeacle and District had opened a five-points lead after John Bourke scored a try in the corner after a superb rolling maul from a lineout.

The subsequent restart saw Kilfeacle encroach on the visiting side’s 22 and after 16 minutes the home side were rewarded with a well-worked try scored by Keith Bourke.

For long periods of the first half the two packs were embroiled in a battle, not always pretty but enthralling. Kevin Kinnane, Brian McLoughlin and Diarmuid O’Donnell were at the front line giving as good as they got with Philip O’Connor, Simon Barry, James Ryan Salmon, Brian Barlow and Jack McLoughlin supporting them with every ounce of effort they could muster.

In the 23rd minute William Staunton kicked a penalty to increase his side’s lead to 13 points to 6.

Kilkenny managed to reach the 30 minute mark only 7 points down and were slowly coming to terms with Kilfeacle’s  pack and began to push into the opposition’s territory.

The final 10 minutes of the half saw Kilkenny making some forays into Kilfeacle’s 22. During this time Kilkenny were frustrated to see an easy penalty kick miss narrowly. At  half time  the scoreboard read 13 points to 6 in favour of Kilfeacle.

Cometh the hour cometh the man and on the 14th minute mark William Staunton kicked a monstrous penalty from the halfway line.

This seemed to settle the team and unleash the shackles. With the scoreboard reading 16 points to 6 Kilfeacle began to look menacing with some sustained possession and good phases of play. Defending outside their own 22, Kilkenny were stopping their counterparts by any and all means possible.

In the 23rd  minute Kilfeacle built up many phases of play and provided quick ball to see Kevin Kinnane pick up the ball inside his own half to elude six tackles before finally being pulled to ground by a combination of Kilkenny’s fullback and winger.

Between them Gavin Heuston, Shane Luby and Keith Burke each in their turn broke tackles and gained yards before providing a perfect pass to James Hogan, who had left his fullback position to provide extra options in attack, to score in the corner. William Staunton notched on the extra  points to stretch out the lead to 23 points to 6.

Kilfeacle came in search of another score. They didn’t have to wait long. After two minutes the Kilfeacle pack were camped in front of the Kilkenny posts. William Staunton stepped back into the pocket to kick over a dropgoal and increase Kilfeacle’s lead. 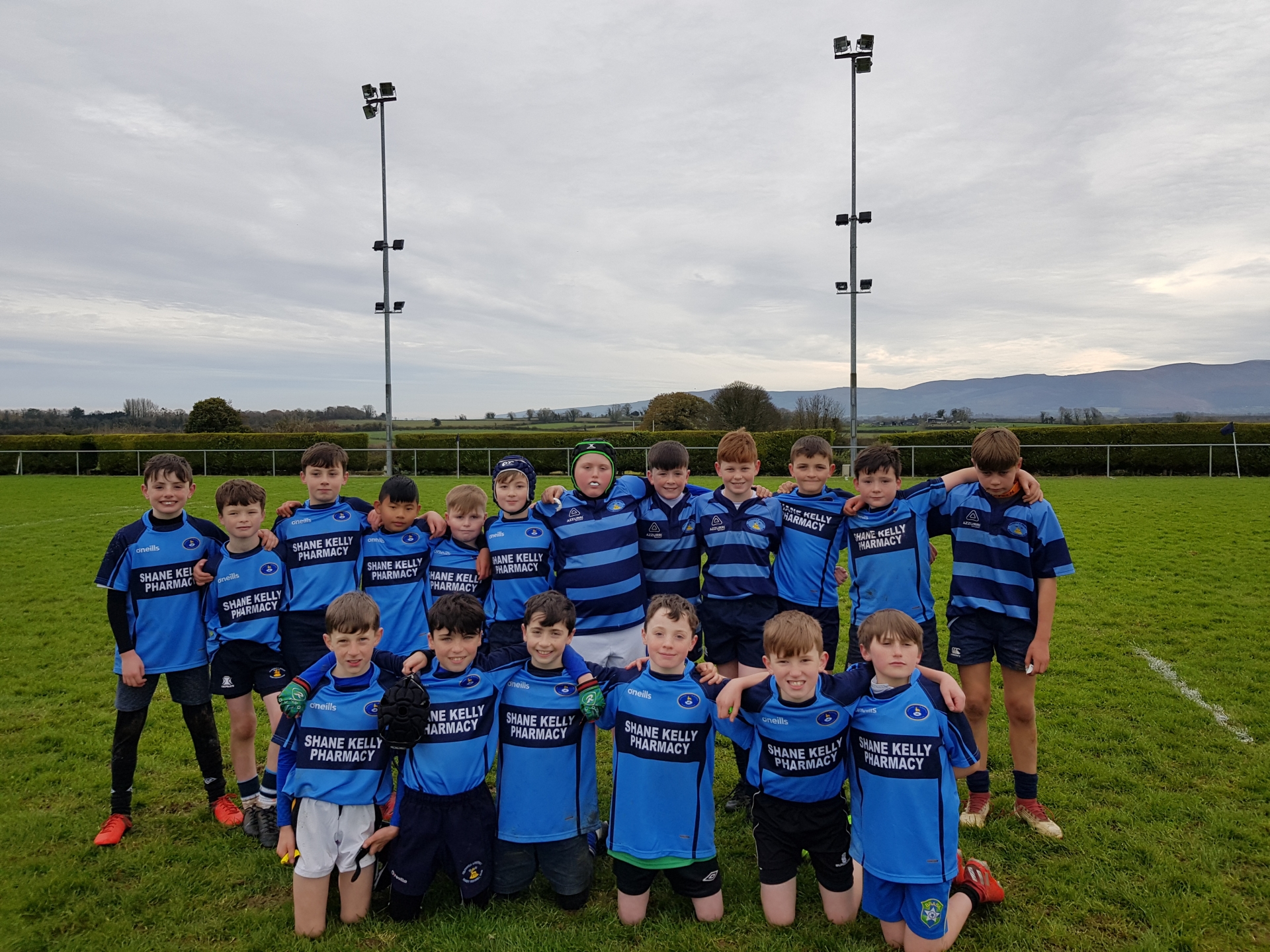 For the next 10 minutes the game entered a stage when a number of missed opportunities by Kilfeacle and some last-ditch defending by Kilkenny saw the score remain at 26 points to 6.

With 10 minutes remaining and the game seemingly over as a contest Kilfeacle emptied the bench. Kilkenny didn’t see the game as a lost cause and made ground slowly and inexorably. They finally seemed to have found another gear, when in the 73rd minute their outhalf touched down under the posts. The Kilkenny fans were still celebrating as the conversion attempt sailed between the posts.

Kilfeacle, who were now leading 26 points to 13, were now suffering from a reversal of positions as wave after wave of attacks from Kilkenny bombarded their try line.

The last two minutes saw continued pressure from Kilkenny as they threw caution to the wind and went all out attack. The referee had already called last play when he signalled a penalty advantage to Kilkenny inside Kilfeacle’s 22.

Kilkenny opted to play on and 90 seconds later they were to score in the corner, which they were unable to convert.

The final score read 26 points to 18, with the visiting supporters disappointed after the fine effort put in by a very strong and courageous Kilkenny side.

NEWCASTLEWEST ON SUNDAY NEXT

Our next game is a top-of-the-table clash away to Newcastle West on Sunday November 23 at 2.30pm.  The team will start this game as underdogs, with Newcastle West strong favourites given their unbeaten run and home advantage.

The team as ever are proud and humbled by the amount of support they receive and hope that their supporters will continue to come along and support the “Boys in Blue”.