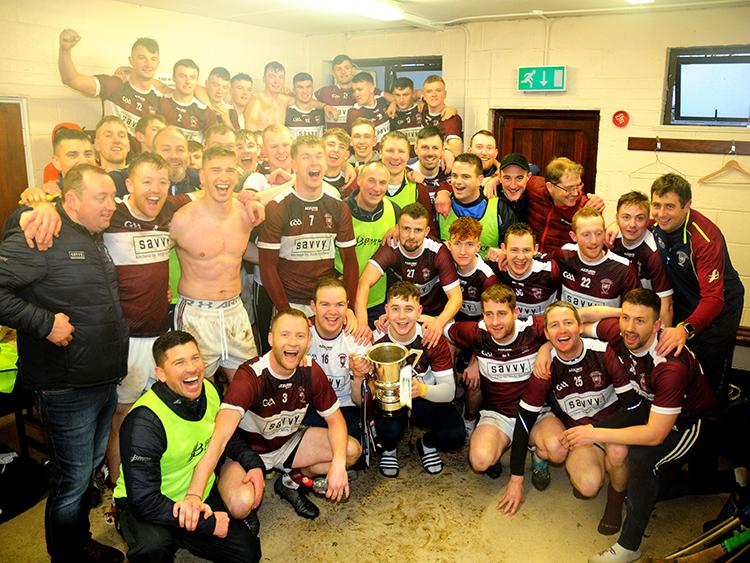 Man of the match Brendan Maher has revealed that Borris-Ileigh were delighted to note during the week that the weather forecast for Sunday was “bad” - the Tipperary champions welcomed the opportunity to turn the AIB Munster Senior Club Hurling Championship final against Ballygunner at Páirc Uí Rinn into a battle.

“To be honest during the week when we heard that the weather was going to be bad we saw it as a positive for us because we have a physical team. We said that if we can get in these lads’ faces we could grind out a victory and that’s what happened,” Brendan Maher revealed.

And, despite trailing Ballygunner by three points at the break Brendan Maher insisted that the Borris-Ileigh players still believed that they could retrieve the situation.

“We were happy at half-time in the sense that we were only three points down and we hadn’t hurled well,” Brendan Maher explained.

“So, we said, look, we do need to address a lot of things, but we are in a great position. We have whatever breeze is in it and we are playing down the field, if you want to call it that, into the scoring goals. So, we were happy with where we were, but we still needed to make a few adjustments and, thankfully, our forwards really upped their game in the second half. They won a lot of dirty ball and that was the difference.”

And, Brendan Maher struggled to put into words what this Munster senior club hurling final success would mean to the people of Borris-Ileigh.

“You can see it there around you - the elation. It’s unbelievable. It’s hard to believe, but we will soak it in for the next few days and we will celebrate it like we do in Borris, as always.

“It has been a rollercoaster, but we are riding the wave now and we just want to keep on going,” Brendan Maher said before praising Kieran Maher for the manner in which he converted his goal-scoring opportunity in the 45th minute: “Kieran Maher is very calm and he doesn’t do panic. It was a great finish and a great run”.

To read the TipperaryLive.ie report on the AIB Munster Senior Club Hurling Championship final which Borris-Ileigh won by a single point (1-12 to 1-11) against Ballygunner please click here.

Brendan Maher also revealed how confident he was that Borris-Ileigh would push on and win the game during the frantic last few minutes.

“One thing that hasn’t been noticed about us really this year is our fitness levels which is testament to Angelo Walsh our S&C (strength and conditioning coach),” Maher said.

“He has three years of work gone into this team. You can see it there - those tough conditions can take an awful lot out of the legs, but we were the ones that were still going there when it was fifty-nine and sixty minutes. That’s what wins games when it is tight like that. So, the credit goes to Angelo and all of the boys that have put in the work.”

It goes without saying that Borris-Ileigh have travelled a significant journey since losing the Hibernian Inn North Tipperary Senior Hurling Championship final against Kiladangan on Sunday, September 29 (1-8 to 2-13). Indeed, Brendan Maher has revealed that winning the county title was always the Borris-Ileigh target.

“We were (playing) five weeks on-the-trot coming into the North final and that took its toll on us. That’s not an excuse because it was a bad performance, but I think the one thing that Johnny Kelly has instilled in this team is huge belief. He spoke immediately after that game that our target was to win a county final this year,” Brendan Maher explained.

“We didn’t speak about North finals at the beginning of the year. We spoke about the county final all the way through. I think that might have been ingrained a little bit into the back of our heads.”