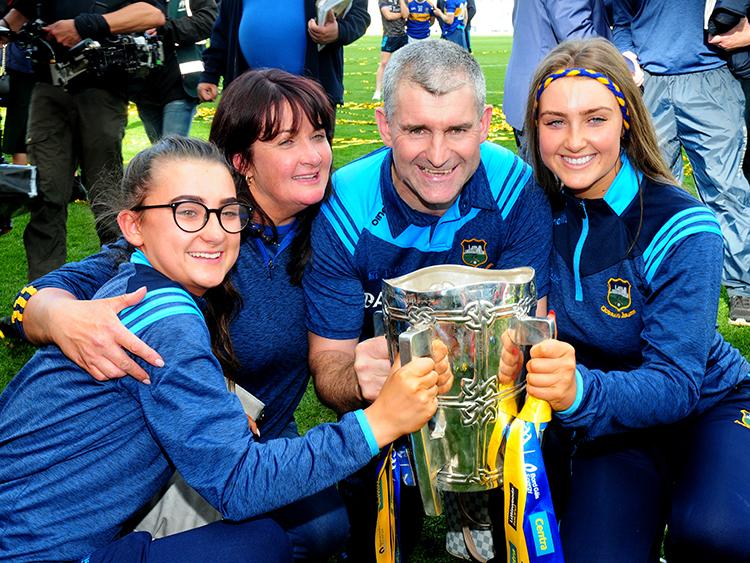 Tipperary manager Liam Sheedy and his wife Margaret pictured with their daughters Aishling and Gemma along with the Liam MacCarthy Cup at Croke Park last August. Picture: Eamonn McGee

The defending All-Ireland champions Tipperary will launch their 2020 campaign on December 15 when Liam Sheedy's men take on Clare in the opening round of the Co-Op Superstores Munster Hurling League while the remainder of the Premier County's schedules of games in both hurling and football has been confirmed for the forthcoming season.

Tipperary will launch their 2020 season on Sunday, December 15 in the Co-Op Superstores Munster Hurling League against Clare at MacDonagh Park in Nenagh (throw-in 2pm) and then face Limerick on Friday, December 20 at the LIT Gaelic Grounds in Limerick (throw-in 7.30pm). The final is scheduled to take place on Sunday, January 12.

In the McGrath Cup the Tipperary footballers will launch their campaign on Thursday, January 2 at Páirc Uí Rinn in Cork (7.30pm) when David Power's men take on the Rebels while on Sunday, January 5 the Premier County will face Kerry at Clonmel (2pm). The McGrath Cup final is scheduled to take place on Saturday, January 11.

Tipperary will compete in group A of division one and will launch their campaign on Saturday, January 25 against Limerick at Semple Stadium, Thurles (5.15pm). On Saturday, February 1 the Premier County are away to Cork (Páirc Uí Chaoimh) at 7pm.

Liam Sheedy's men will complete the round robin phase of the National Hurling League on Sunday, March 1 against Wateford at Semple Stadium in Thurles (2pm).

The league quarter-finals are scheduled to take place on March 7-8, the semi-finals on March 14-15 and the final on March 22.

David Power's men will compete in division three of the National Football League and will launch their campaign at home to Down on Sunday, January 26 in Clonmel (2pm).

Tipperary's final home game of the campaign will take place on Sunday, March 15 when David Power and company host Offaly at Semple Stadium, Thurles (2pm) and in the final round of games on Sunday, March 22 the Premier County will face Leitrim in Carrick-on-Shannon (2pm).

The division three league final is scheduled to take place on March 28.

Tipperary’s fixtures have also been finalised for the 2020 Munster Senior Hurling Championship and are as follows: Sunday, May 10 v Waterford in Walsh Park (2pm), Sunday, May 17 v Clare in Semple Stadium, Thurles (4pm), Saturday, June 6 v Limerick at the LIT Gaelic Grounds (7pm) and Sunday, June 14 v Cork in Semple Stadium, Thurles (2pm). The final is scheduled to take place on Sunday, June 28. The Premier County’s minor hurlers will, of course, play in the curtain raiser against the corresponding opposition in each round.

The Tipperary senior footballers will take on Clare in the quarter-finals of the 2020 Munster Senior Football Championship at Semple Stadium in Thurles on Saturday, May 9 (7pm) - the winner will take on Waterford or Limerick in the semi-finals on Saturday, May 30 with the provincial final scheduled to take place on Sunday, June 21.

John Devane’s Tipperary under-20 hurling team have been drawn at home against Clare in the quarter-finals of the 2020 under-20 provincial championship - that contest is fixed to take place on Tuesday, June 30 with the winner progressing to face Waterford in the semi-finals on Wednesday, July 8.  The Munster Under-20 Hurling Championship final is scheduled to take place on Wednesday, July 22.

Tipperary are away to Limerick in the quarter-finals of next year's Munster Under-20 Football Championship on February 12 with the winners scheduled to face Kerry on February 19 - the provincial final is fixed to take place on February 26.

Meanwhile the minor footballers will launch their phase one of the provincial championship campaign on April 8 when the Premier County host Clare. Tipp will take on Limerick in Limerick on April 15 while in round three on April 22 the Premier County face a trip to Waterford. The phase one final is scheduled to take place on May 5 - the winner of that contest will then progress to compete in the Munster Minor Football Championship proper  against Cork and Kerry.