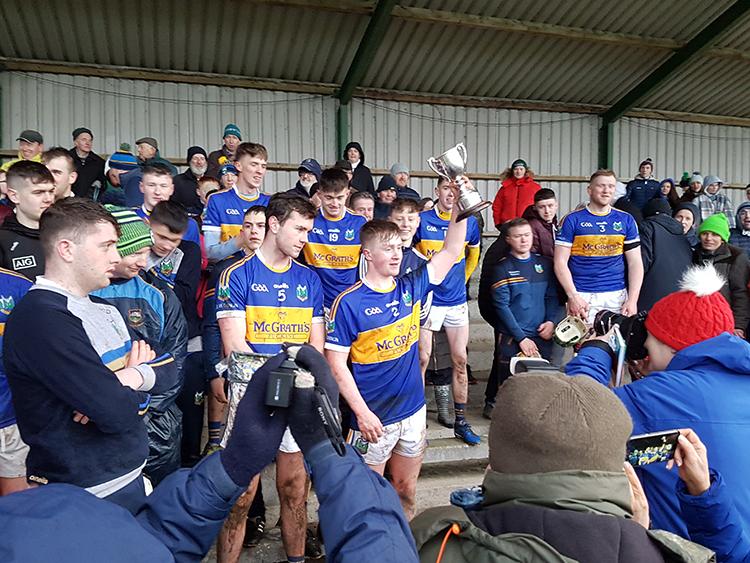 On Sunday afternoon at MacDonagh Park in Cloughjordan Kiladangan won the final of the North Tipperary Under-21A Hurling Championship at their relative ease against a thirteen-man Toomevara.

Prior to this decider Kiladangan had already collected the North Tipperary senior and minor A hurling crowns and although they were heavily fancied to add the divisional under-21A title to their haul this season the Greyhounds were expected to mount a serious challenge. That is until Dan O’Meara buried a goal within seconds of the throw-in and Toomevara full-back Séamus O’Farrell was shown a straight red card in the fourth minute following an off-the-ball altercation with Kiladangan’s Billy Seymour.

It is probably fair to say that Toomevara’s discipline on Sunday left quite a bit to be desired: Josh McCarthy could easily have walked for a strike on Conor Culhane in the eighth minute while the Greyhounds were reduced to thirteen men in the 60th when Eoin Grace was also shown a straight red.

Following referee Ger Fitzpatrick’s final whistle there was also a confrontation between both sets of players in the middle of the field, but, thankfully, this incident was defused and Kiladangan captain Darragh Molloy collected the trophy from North Tipperary GAA Board chairman Mike Flynn (Kiladangan).

Toomevara were certainly frustrated by the early dismissal of Séamus O’Farrell, but even with the full complement of players it was hard to see the Greyhounds winning - Kiladangan were just too good for them on this occasion.

Toome did not score their first point until the 30th minute and failed to score from play during the entire course of this final. Meanwhile - and despite the horrendous conditions - Kiladangan played some smart stuff. Ciarán Kelly was immense at full-back and although Seán Hayes, Dan O’Meara and Billy Seymour caught the eye up front the volume of work that Eoin Sharkey and Tom O’Meara ploughed through in the half-forward line was really something to behold - this duo were absolutely immense.

Kiladangan were a goal to the good in the first minute when Dan O’Meara fired home. Darren Ryan landed a mighty point off his right soon after and following the dismissal of Séamus O’Farrell Kiladangan enjoyed another goal-scoring opportunity in the fifth minute, but Tom O’Meara’s effort was blocked by Jake Ryan.

In the seventh minute Billy Seymour fired over his side’s second point (1-2 to no-score) before Toomevara enjoyed a slight glimpse of goal in the 14th minute when Alan Ryan attempted to steer an ambitious shot through a crowd of bodies.

Twelve scoreless minutes came to a close for Kiladangan when Darren Ryan won a Toomevara puck-out and set up Seán Hayes for a smashing point. Four minutes later Eoin Sharkey created another opportunity for Bryan McLoughney while McLoughney fired over his side’s fifth point in the 24th minute.

Eoin Sharkey provided the assist for yet another Billy Seymour point soon after while Toome scored their opening point of the game in the 30th minute when Rory Brislane belted over a long-range free.

Four minutes into first half injury time Eoin Sharkey grabbed a Toomevara puck-out at left wing-back, burst forward and set up Billy Seymour who helped Kiladangan toward a 1-7 to 0-1 interval advantage. Please note that Kiladangan also fired nine wides (Toomevara: one) and dropped another six shots short during a one-sided opening half.

The opening twenty-one minutes of the second half proved reasonably uneventful as the respective free-takers traded efforts. Kevin McCarthy drilled over four placed balls on behalf of Toomevara while Billy Seymour responded with four of his own for Kiladangan. And, entering the final nine minutes of normal time Kiladangan led by nine points (1-11 to 0-5).

You always suspected, however, that Kiladangan were just a pass away from carving Toomevara open and they did so in an accomplished manner in the 53rd minute - following neat work from Bryan McLoughney and Eoin Sharkey the ball was moved laterally to Seán Hayes who took on the Toomevara defense, drew a man and set-up Dan O’Meara for a left-handed finish.

Three Kevin McCarthy frees brought the scoring to a conclusion from a Toomevara point of view, but there was still time for the Kiladangan men to celebrate efforts from Dan O’Meara, Billy Seymour and Seán Hayes.