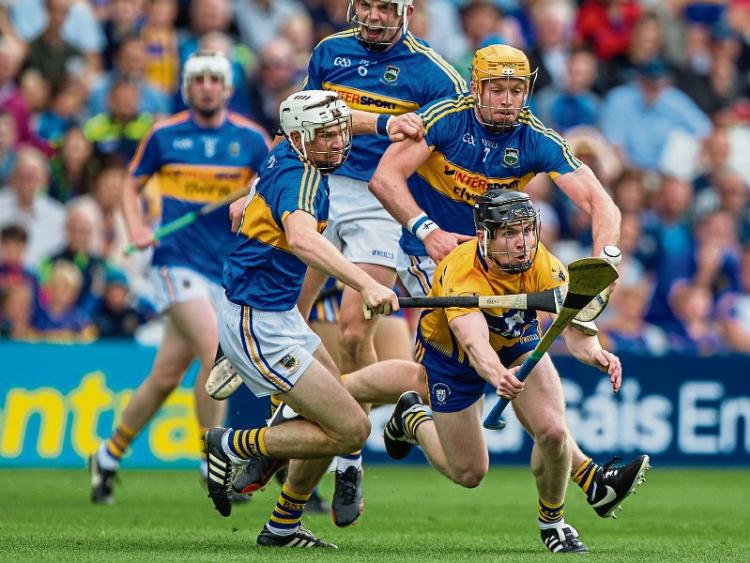 Tipperary and Clare were in action this afternoon in Nenagh

Visitors Clare handed Tipperary their first defeat of the new season in the Munster Co-Op Superstore league tie at MacDonagh Park Nenagh this afternoon  when one point separated the sides at the end.

It might have been two Sunday's before Christmas, but there was still a lot of interest in this game with Clare bringing a new management team led by former star Brian Lohan, and of course former Moycarkey Borris man Ken Ralph. And, from a Tipperary perspective there was a chance to see a number of fringe players in action with just three of the All-Ireland Final starting side starting this game - Ronan Maher, Michael Breen and Jason Forde.

Two goals in three minutes midway through the first half helped Clare to a 2-6 to 0-10 interval lead in what was a tough, uncompromising encounter. Tipp were three clear when Clare got their first goal through Ian Galvin in the 14th minute. And, three minutes later Seadna Morey found the back of the Tipp net again to set up the visitors.

For Tipperary, Jason Forde had been the star of the half with eight of their scores including a glorious sideline cut to notch Tipp's first score of the new season. And, Forde had three from play in the half as well to go along with Willie Connors and Michael Breen scores.

The second half was nip and tuck all the way and Tipperary seemed to be have the knack of keeping their noses in front. However Clare bagged the last four scores of the game to claim the spoils with Niall Deasy (2) and subs Cathal McInerney and Aidan McCarthy  proving the winners.

It was a disappointing defeat for Tipp but one they won't dwell too long on as they face Limerick on Friday evening next in Pairc na nGael in the second round.