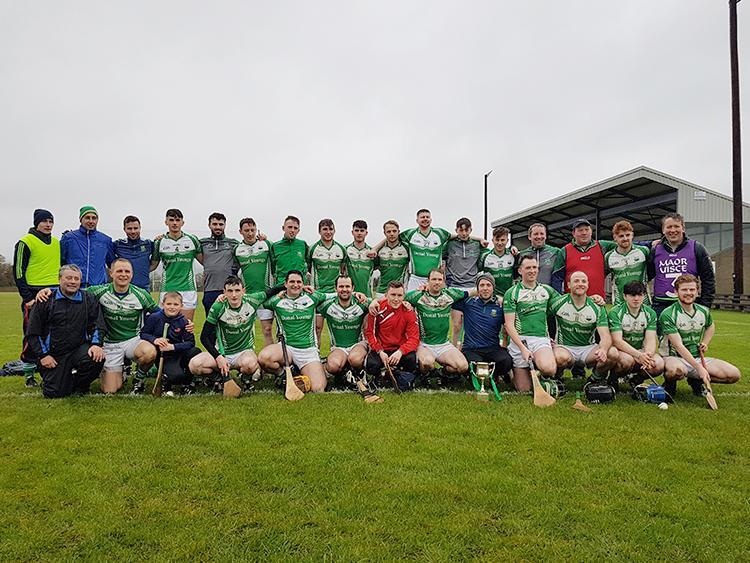 The Drom & Inch panel and management team pictured celebrating their victory over Borrisokane in the FBD Insurance County Junior B Hurling Championship final at Templederry in November.

On Saturday, January 11 Drom & Inch will make the trip to Páirc Íde Naofa, Raheenagh in West Limerick to face Garryspillane in the 2019 Munster Junior B Hurling Championship decider (throw-in 2pm).

To reach the decider Drom & Inch cruised to a nine-point win (0-16 to 1-4) over Castletownroche (Cork) in a one-sided provincial semi-final at Páirc Íde Naofa in Raheenagh (Limerick). Indeed, the Tipperary champions were ten clear when Castletownroche scored a late consolation goal which took the lop-sided look off the final scoreline.

Next day out the Michael Fitzmaurice Memorial Cup will be on the line against Garryspillane.

Drom & Inch capped a terrific season for the Mid Tipperary club at Templederry in November when Trevor Hassett’s men fought back from five points down to beat Borrisokane in an entertaining FBD Insurance County Junior B Hurling Championship final (1-14 to 1-9).

And, that success capped off a wonderful season for Drom & Inch who added the county junior B title to their Mid Tipp senior crown, county minor A hurling title and also their stunning successes in both division one and division three of the All-County Hurling League.