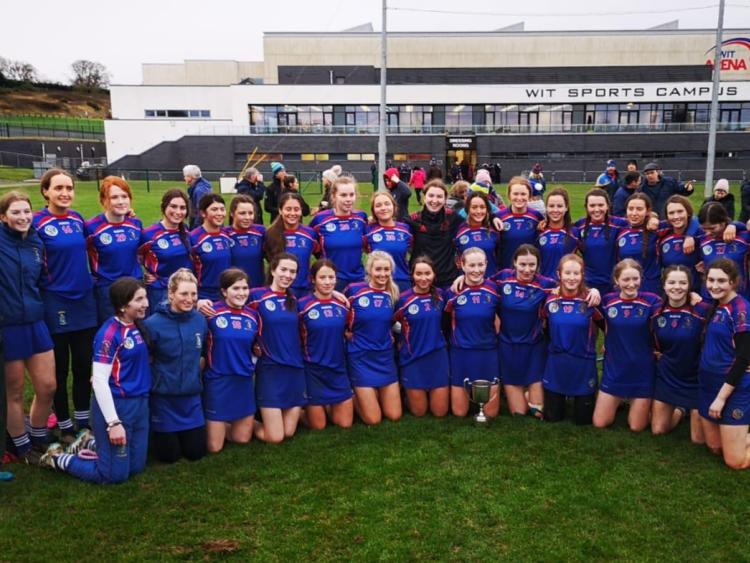 The Ursuline Thurles panel of players who were crowned Munster senior A camogie champions.

A heroic Ursuline Thurles team were rocked early on by two St Angela's goals, but Ursuline fought back brilliantly at the WIT Sports Arena in Waterford to win Munster Senior A Post-Primary Schools Camogie Championship final the with two points to spare (3-10 to 3-8) on Saturday.

Amid a heavy downpour St Angela’s were first on the scoreboard in dramatic style with a goal courtesy of centre-forward Abby Flynn. She was to prove a constant danger to the Thurles backs throughout the entirety of the game, along with full-forward Aoife Fitzgerald.

Ursuline kept their cool, however, and replied with a steady stream of points from frees and play.

The first Ursuline goal came in the first half and followed a goalmouth scramble. This strike kept Ursuline in contention and to their credit they refused to lose heart even when the Waterford side plundered got a second goal thanks to Alannah O’Sullivan.

Team captain Eimear McGrath proved a steady influence in the forwards and notched up a series of vital scores to keep the Ursuline dream alive.

The mid-field duo of Eimear Bourke and Emily Kavanagh, along with Emma Dunphy and Eimear Heffernan in the half-back line, helped the Ursuline cause no end.

It was inevitable though that St Angela’s would hit a purple patch and this was the case in the closing ten minutes of the opening half. The Waterford capitalised on their strength to go into the dressing room with a four-point lead (3-3 to 1-5).

Thurles had everything to prove after the break.

The second half featured a spectacular display of skill and determination from both sides.

Thurles dug deep with points from Eimear McGrath, Louise Hickey and Caoimhe McCarthy while at the other end of the field UCT had shored up their defences and make St Angela’s work harder for every second half score.

Emma Kennedy denied St Angela's another goal with a terrific save ten minutes into the second half and then a fantastic Gráinne Long clearance down the field was picked up by Eimear McGrath who found the uprights to force Thurles into the lead.

The Déise reply was a point to keep things neck-and-neck (St Angela’s 3-6 Ursuline 2-9).

There was now real sense that if UCT could keep their momentum going they would be going home with the cup. And, that’s exactly what the Tipp side did.

St Angela’s never gave up and scored a further two points, but Ursuline replied with one of their own off the stick of Eimear McGrath to maintain earn a two-point lead just as the final whistle sounded to whoops of joy. And, the Ursuline supporters invaded the field to celebrate the school's first Munster senior A final win since 2017.

We forward our congratulations to the whole panel, to the team coaches (Ms Hogan, Mr Teehan and Ms O’Friel) and to all of the supporters, parents and teachers who travelled to Waterford to cheer on the team.

St Mary's, Nenagh lost the senior B post-primary schools camogie final to St Mary's Midelton (1-4 to 2-18) at Puckane on Saturday,

There was further positive camogie news over the weekend when Presentation Thurles beat Loreto Fermoy (3-6 to 4-1) to win the Munster junior C title at The Ragg Camogie Grounds.

Thurles led by two points after fifteen minutes and were leading 1-3 to 1-1 at half-time, but Fermoy struck for two goals early in the second. A determined Thurles display saw them score 2-2 during the final quarter to win this final.