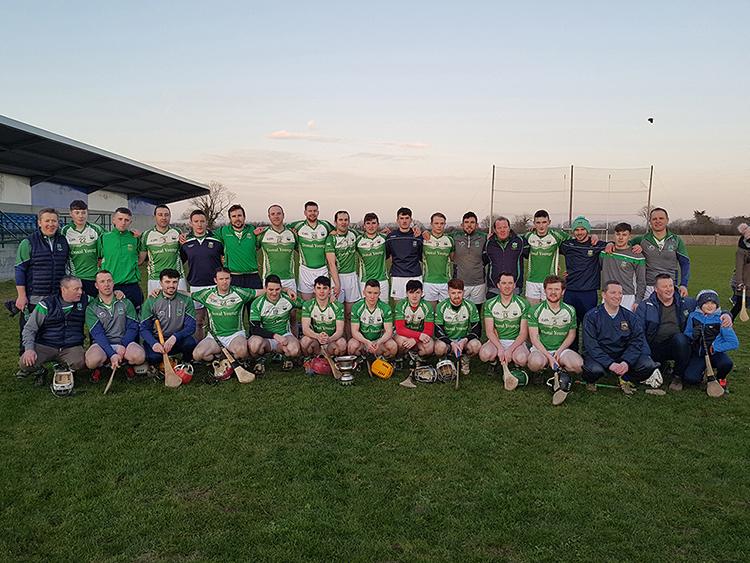 A slow start cost Drom & Inch dearly in an All-Ireland Junior B Hurling Championship semi-final clash with Dublin side St Vincent’s played at Raheenagh in West Limerick on Sunday afternoon. The Tipperary champions contributed handsomely to a thrilling contest, but found themselves eight points adrift following a sluggish opening quarter (0-2 to 1-7) and struggled to reel in a St Vincent’s outfit who progressed to the decider.

It must be noted that once Drom & Inch installed a sweeper (Colm Kinane) and switched man of the match Cathal Ryan back into the full-back line Trevor Hassett’s men performed brilliantly for long stages of this contest. Indeed, the Mid Tipperary men out-scored their opponents 1-12 to 0-9 between the 14th and the 51st minutes. That surge cut the deficit faced by Drom & Inch to a very manageable two (1-14 to 1-16), but St Vincent’s, with Séan Lambe outstanding, saw out the closing minutes of the contest with ace freetaker Shane Kiernan propelling the Dublin champions into the All-Ireland final with three late frees.

Cathal Ryan landed an outstanding long-range point to get Drom & Inch off to an encouraging start against the wind and when Michael Clohessy added to his side’s tally the Tipperary men led 0-2 to 0-1 after three minutes. Just then, however, St Vincent’s exploded into devastating life. Gary O’Meara drilled over two points while the inside forward seized the initiative for his side with a terrific goal in the fourth minute.

Seán Lambe and Shane Kiernan then added two excellent points from play before further efforts from Damien Russell and Gary O’Meara opened up an eight-point gap (0-2 to 1-7). And, that gap could have been wider had Eric Woodlock not spoiled a Pádraig Whelan goal chance in the 11th minute.

To be fair the Drom & Inch management reacted to the challenge posed. Cathal Ryan was switched onto Gary O’Meara and Trevor Hassett also re-structured the entire lay-out of his team to significant effect. Indeed, the Tipperary champions proceeded to win the remainder of the half 1-5 to 0-4. Inspired by Cathal Ryan’s brilliant defensive display and two terrific Michael Clohessy points Drom & Inch roused themselves. Séamus Butler also converted two frees before the veteran bravely grabbed a searching Cathal Ryan delivery in the 26th minute and fired home a goal off his left (1-6 to 1-11).

There were sighs of relief all round in the 28th minute when Gary O’Meara butchered a glorious St Vincent’s goal chance and when Jerome Ryan fired over a seventh Drom & Inch point in the 31st minute the Tipperary champions were right back in it (1-7 to 1-11).

The sides traded points initially after the break before Drom & Inch ‘keeper Paul Connors did well to save Rory Finn’s stinging shot in the 32nd minute.

Drom & Inch then rallied with points from Jerome Ryan and Johnny Kennedy. Indeed, Johnny Kennedy’s introduction made a telling impact on this contest in the second half.

St Vincent’s steadied themselves thanks to a Gary O’Meara effort while Drom & Inch were left cursing their misfortune in the 39th minute - Ciarán Ryan created a goal-scoring opportunity of real note for Michael Clohessy, but St Vincent’s ‘keeper Conor Casserly conjured a brilliant save to deny the raiding Mid Tipperary man.

Following efforts from Seán Lambe and Shane Kiernan (free) St Vincent’s led by five entering the final quarter (1-10 to 1-15), but with Paul Connors’ puck-outs now landing inside the opposition 45-yard line and with Johnny Kennedy wreaking havoc as a ball winner there was still time for Drom & Inch to rescue the situation. Indeed, Kennedy provided the assist for the next four Drom & Inch shots which Michael Clohessy, Séamus Butler and Aaron Ryan (two) all converted.

Four scores in five minutes had reduced the St Vincent’s lead to two (1-14 to 1-16), but Drom & Inch had abandoned the sweeper system and pushed up on the Dublin outfit during the final quarter in order to battle their back into contention. It was a risk worth taking considering the circumstances, but it also cost them late on when Seán Lambe, in particular, found the room to run at the Drom & Inch defence. Without extra cover the Drom & Inch backs were forced to foul and between the 53rd and 57th minutes Shane Kieran converted three placed balls which, essentially, sealed the issue.

Cathal Ryan and Jerome Ryan (free) did add injury time points to the Tipperary champions’ tally, but the damage had already been done.

The Drom & Inch lads may harbour some regrets following this contest, but it must be noted that they have represented their people superbly during this eye-catching campaign.