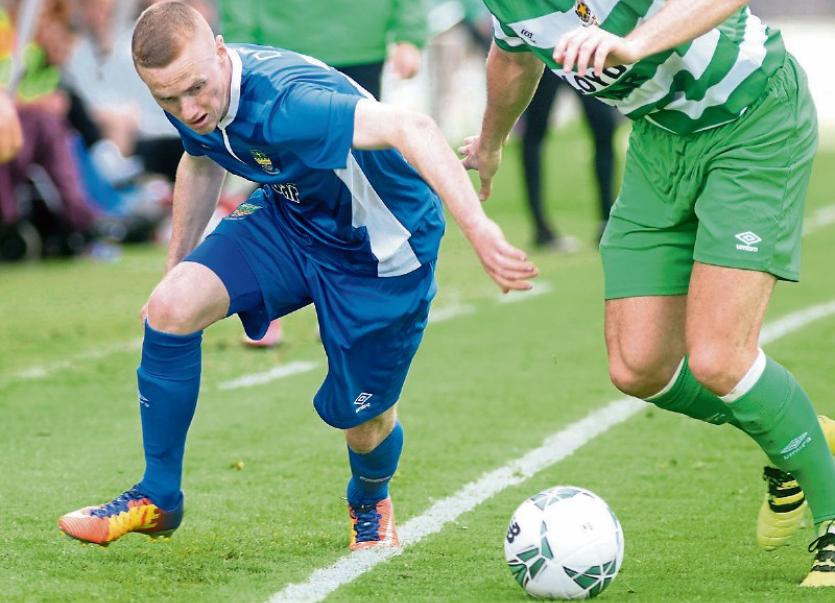 The current cup holders had to survive a late scare in this game before returning from Cork with their place in the next round assured, after they uncharacteristically allowed their opponents to score two late goals when it had seemed they were coasting to victory.

The visitors started well and almost took the lead in the seventh minute when David Slattery had an attempt cleared off the line. But within four minutes they had breached the home side’s rearguard and took the lead when a good one two between Slattery and Willie Armshaw saw Armshaw speed into the area and finish to the net.

Saints were moving the ball well but the hosts slowly clawed their way back into the game and had some chances that the TSDL champions did well to clear. However right on the stroke of half-time the home side equalised when a St Mary’s forward was given a free header at the back post and he made no mistake.

It only took one minute of the second half however to restore the champions lead when they were awarded a penalty and Jimmy Carr stepped up to blast home from the spot.

Two became three ten minutes later when a long kick out from Derek Breen freed Gavin Dillon on the left and his cross saw Jimmy Carr score from close range.

And on 65 minutes it looked done and dusted when the Tipperary side went 4-1 in front after an own goal.

But the home side didn’t give up and pulled a goal back ten minutes from the end when a mix up in the St  Michael’s defence saw Daniel Gethings made it f4-2, and the deficit was then reduced to the minimum six minutes from time when John Paul O'Sullivan hit a cracker from all of 25 yards out.

But this roused the champions defence back into action and they shut up shop to see out the game, no doubt happy to get away with the win.

Cashel Town have been having a fantastic season domestically but crashed out of the Munster Cup on Saturday evening after a bad-tempered affair in Cork, where they went down to Coachford.

The visitors started well and were more than a match for the hosts in the early part of the game. They even had the ball in the net through Eoin Byrne in the 20th minute, but had the score ruled out for offside, a contentious decision that was at the root of much of the Tipperary side’s frustration from then onwards.

The game continued and there were no goals and very little chances of note by the half-time whistle.

The second half started much the same was as the first ended but in the 51st minute the home side were awarded a penalty kick that was despatched to open the scoring.

For the rest of the game the onus was on Cashel to attack as Coachford defended deep and slowed the game down with every opportunity.

The Tipperary side’s frustrations boiled over near the end and they were reduced to nine men when two of their players say red.

Town started well and took the lead in the fifth minute through Jamie Ahearne when he scored from 25 yards out to put the visitors ahead.

Fairview Rangers enjoyed the majority of possession afterwards but Clonmel Town defended well and snuffed the many home attacks.

The visitors  had a couple of more half chances which could have extended their lead but they still went in at the break one goal to the good.

Disaster struck for TSDL outfit in the first minute of the second half conceding an equaliser when Eddie Byrnes struck.

Ten minutes later they found themselves behind when the home side benefitted from  a deflected goal. This now  gave Clonmel Town  an uphill battle, and despite giving it everything to force an equaliser they were hit on the break and conceded a late third through Robbie Kelleher which gave the Limerick city side  victory and their passage to the 5th round of the Munster Junior Cup.