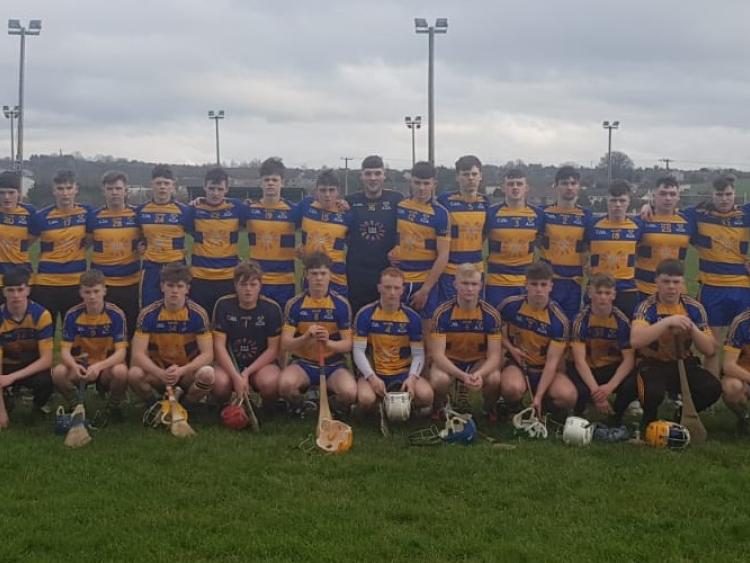 The Cashel Community School panel of players which beat St Augustine’s in the Munster semi-finals.

Cashel Community School will take on Scoil na Tríonóide Naofa, Doon in the Munster Under-19B Post-Primary Schools Hurling Championship final on Saturday, February 15 at Bansha when the prestigious Corn Thomáis Mhic Choilm will be on the line (throw-in 12 noon). And, some extra intrique has been added to this decider with Tipperary men featuring on both teams.

The Doon team, which features eight Tipperary players from Cappawhite and Éire Óg Annacarty, got the better of Borrisokane Community College in the semi-finals (3-21 to 2-15) while Cashel Community School proved too strong for St Augustine’s (4-16 to 3-16).

In the quarter-finals Cashel Community School accounted for Causeway Comprehensive (1-22 to 2-18) while the Tipperary outfit have also beaten Rice College, Ennis (1-17 to 0-8) and Coláiste Chríost Rí, Cork (7-21 to 0-5) during their campaign.

Meanwhile Scoil na Tríonóide Naofa, Doon proved too strong for Scoil Phobal, Roscrea (1-32 to 4-20) in the quarter-finals and Abbey CBS (1-16 to 1-15) in an earlier round of the competition. The Limerick school did lose to St Augustine's (2-8 to 1-13) during the group phase, but re-grouped before surging into the provincial decider.