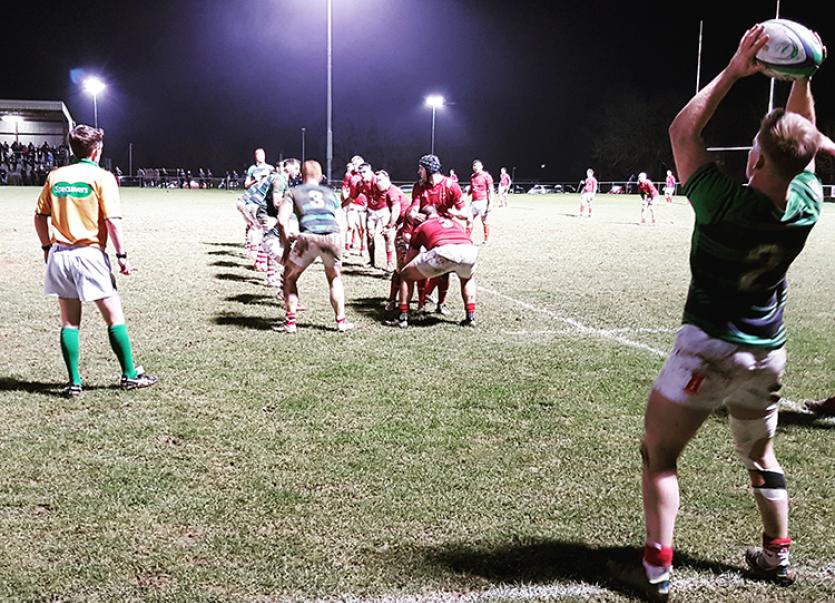 A quality Cashel RFC side gave their promotion hopes a huge boost on Friday night at New Ormond Park when enjoying a thirteen-point win over Nenagh Ormond RFC in an entertaining Energia All-Ireland League division 2A clash between these two keen Tipperary rivals.

Having beaten Nenagh Ormond twice already this season - 22-10 in the AIL and 22-17 in the Munster Senior Challenge Cup - Cashel RFC completed the clean sweep against their fellow Tipperary men, but only after a real battle. Indeed, the home side trailed by just a single point in the 70th minute after John Hayes thundered over for a rousing Nenagh try. But in an illustration of their composure Cashel RFC proceeded to earn a penalty try (scrum) right under the Nenagh posts and then in second half injury time number eight James Ryan touched down and presented Ormond with a significant margin of defeat.

At regular junctures there was a nasty edge to this contest and Nenagh Ormond made the early running when Daniel Molamphy threatened to score a try before finding himself pushed into touch. Ormond, however, took the lead thanks to a Conor O’Brien penalty in the fourth minute following a high challenge on Patrick Scully (3-0).

Soon after, however, a promising Nenagh attack broke down, Luke Duffy counter-attacked from deep inside his own 22 and sparked a move which saw Cashel RFC run the length of the field to score a try which Aidan McDonald converted (3-7). Nenagh’s tackling let them down badly during this sequence of play and the Ormond defence coughed up another avoidable try in the 13th minute when McDonald broke through for converted effort (3-14).

Aaron Hennessy was particularly good for Nenagh and the front row forced a penalty in the 18th minute for holding on which Conor O’Brien booted over. Sixteen minutes later Niall O’Gorman got the credit when Nenagh won a penalty at scrum time; O’Brien converted the opportunity (9-14) and Ormond found themselves within striking distance.

Aidan McDonald hit back with a Cashel RFC penalty soon after, but when Richard Moran was sin-binned late in the half Nenagh Ormond took advantage. In first half injury time Fionn McGibney (playing with a penalty advantage deep inside the Cashel RFC 22) conjured a delicious cross-field kick which Conor O’Brien gathered before scoring.

Nenagh Ormond trailed 14-17 at the break.

Although a man down Cashel RFC set the pace immediately after the break when scoring two tries during the opening six minutes of the half.

A clever Darragh Lyons kick in behind pinned Nenagh back inside their own 22, a crooked throw then presented the Cashel RFC men with a lineout of their own and the visitors mauled their way over for a Niall Fitzgerald try in the 43rd minute. Then, just three minutes later, Cashel turned over the ball just inside the Nenagh half and with no one home in the Ormond backfield Josh Pickering kicked through; Conor Cashman won the foot race and the visitors led by thirteen (14-27).

Nenagh Ormond now had a mountain to climb, but in fairness to the home side they stuck at it and in the 56th minute Josh Rowland did especially well to score in the corner.

In the 59th minute Ferghail O’Donoghue was sin-binned for a late tackle on Conor O’Brien and with Cashel RFC reduced to fourteen men once more Nenagh Ormond enjoyed an opportunity to mount a late challenge. And, with ten minutes to play (following a series of penalties) John Hayes thundered over for a try to leave just a point in it (26-27).

Cashel RFC, however, were soon restored to fifteen players and with the full complement the visitors saw out this contest well with a penalty try following a scrum under the Nenagh Ormond posts and then a strike from James Ryan in injury time.

Nenagh Ormond tried hard, but Cashel RFC proved themselves the more accomplished side on this occasion.