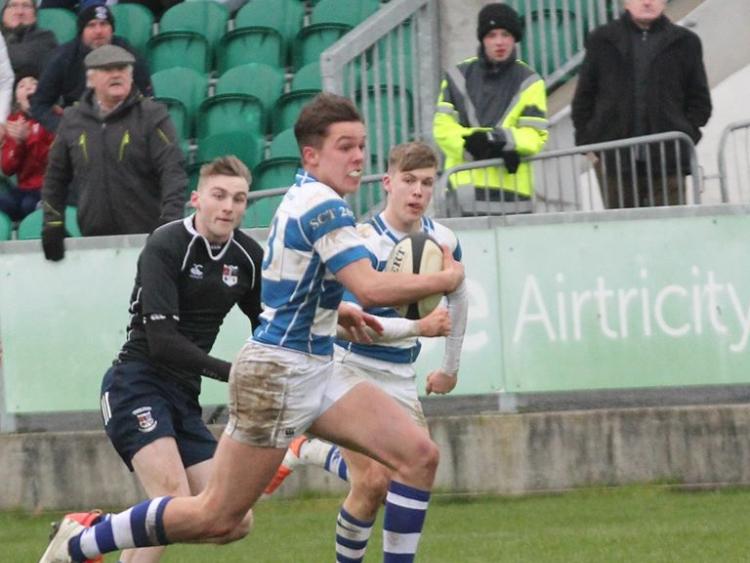 Rockwell College put in sufficient groundwork in the second half to cement their place in this year’s Munster Senior Cup semi-finals where CBC (Cork) await following their impressive 28-5 win over Crescent Comprehensive. On a cool, bright day in the Markets Field's (Limerick) Rockwell College advanced.

There was a tense opening to this game, but Crescent settled better and looked to have Rockwell in trouble on a number of occasions only to be denied by the interventions of Sam Tarleton and Adam Maher. Crescent had the first opportunity to threaten the score board when out-half Ben Davey choose to kick at goal following a high tackle by Cathal Kelly. The kick was narrowly missed to the left of the posts.

Captain Alan Flannery really came to the fore in getting his team into the game with a 40m carry off a scrum five metres from Rockwell’s goal line. This gave Rockwell their first foothold in Crescent territory. Rockwell now became more comfortable with their surroundings, managing to keep hold of the ball better and getting through phases.

On the 12th minute mark Rockwell got an opportunity to open their account when Crescent were penalised for a side entry at ruck time. John O’Sullivan’s radar was off as the ball went to the left of the posts. This, however, was to be the only blotch in his copybook as John proceeded to show his class for the duration of the game alongside with Adam Maher, Alan Flannery, Sam Tarleton and Josh O’Dwyer in an exciting and efficient Rockwell backline.

The best moment of the first half came eight minutes later when Rockwell’s pack - led by Dean Fanning, Cathal Kelly and Dylan Foley - mauled Crescent for fifteen meters before earning a penalty advantage. Rockwell moved the ball to Alan Flannery who showed awareness, power and pace to score from thirty-five metres out when beating three Crescent defenders in the process. John O’Sullivan added the extras from a difficult angle.

As invariable happens, Rockwell lost their focus upon the restart and allowed Crescent an opportunity which they duly took through replacement wing David Murphy who scored in the right-hand corner following a five-metre scrum. Den Davey failed to add the extras.

The remainder of the half was very stop-start with Rockwell's discipline now coming into question. They felt the brunt of referee Tommy Donoghue’s whistle when conceding a number of penalties and free kicks.

Rockwell were relieved to edge the score board by two points at the interval.

The second half started much better with both teams now beginning to test each other. This was both with and without the ball as the physicality stakes went up a couple of notches and this led to the sin binning of the Crescent number five Sean Malone for throwing a punch.

And, Rockwell would make Crescent pay dearly - from a poor Crescent exit kick Tom Tobin off-loaded the ball to Peter Wall who then fed Sam Tarleton crisply. With a number of defenders to beat Tarleton stepped back inside and managed to hand off the covering defender which allowed him to accelerate in for a try from forty metres.

That score allowed Rockwell to breathe easier and they extended their lead in the 55th minute when Josh O’Dwyer showed great power and pace to race over in the corner. John O’Sullivan added the difficult conversion.

Just before the final whistle Josh O’Dwyer was involved in setting up the out-half John O’Sullivan to touch down and convert his own try.

Rockwell were deserving winners on the day and displayed some magic moments of rugby in the second half. However, coach Kevin Leamy acknowledged that their failure to get going is a concern and they will have to step up another gear to dispose of CBC in the semi-finals.