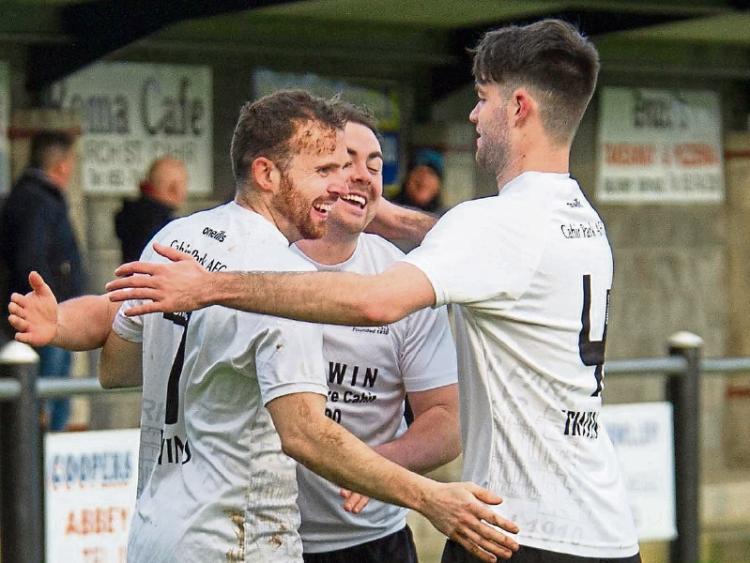 Shane Murphy (left) who along with Alan O'Donnell both scored hat-tricks for Cahir Park in their 8-2 Premier League win against Two-Mile-Borris at Cahir Park on Sunday last.

Cahir Park captured three more vital points in their relegation battle when they had a big win over a Two-Mile-Borris side that seem to have completely stalled after making a good start to the season.

The hosts took control of this game from the start but it took till the 21st minute for them to make their pressure tell when Shane Murphy finished well from the edge of the box. Minutes later the same player made it two with a similar finish, as his side continued to dominate but were unable to add to their tally before the break.

The second half was much the same and six minutes in Alan O’Donnell got the third when he fired in from close range. O’Donnell made it four just before the hour mark, and completed his hat-trick four minutes later as the Park moved into a five goal lead.

Shane Murphy then equalled O’Donnell’s three goal tally in the 70th minute from the penalty spot as the hosts were running rampant.

To their credit Borris kept going and pulled two back in the  73rd and 75th minutes, the first from the penalty spot.

But Cahir got back into the groove with John ‘Benny’ Ryan making it seven and Rhys Byron finished the scoring as the home team ran out comfortable winners.