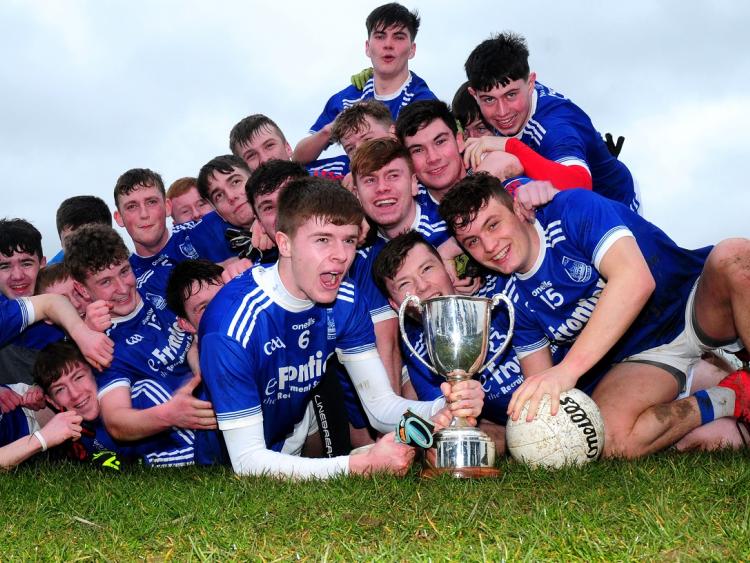 Hot favourites JK Bracken's, who were bidding for a fourth consecutive Munster Construction Mid Tipperary Under-21A Football Championship title, came a cropper at Castleiney on Saturday when Thurles Sarsfields earned a fully deserved victory in the decider, even if the margin flattered them somewhat.

Having dealt out a heavy drubbing to Sarsfields during the round robin stage of the competition, JK Bracken's, the county champions in this grade for the past two years, had every reason to be confidence going into the final, but possibly under-estimated the challenge facing them and did not play up to anything like their potential.

Their case was not helped either by the absence through injury of inter-county man Éanna McBride and the absence also of inter-county hurler Paddy Cadell who was unavailable because of his involvement with the inter-county senior hurling panel in Allianz National Hurling League action the following day (March 8) against Galway. They were a huge loss to the Templemore lads, although the return after injury of Neil Quinlan softened the blow somewhat.

Minor champions in the division last year and beaten finalists the year before, Thurles Sarsfields’ pedigree ought to have forewarned JK Bracken's against complacency. The Thurles lads showed the greater determination and urgency right through and while they score three goals, they could well have had a couple more being particularly dangerous on the counter-attack.

The Blues were three points up after ten minutes and might also have had a goal from Michael Purcell to add to the brace of points from team leader Paddy Creedon and the other from Liam McCormack. Gradually, JK Bracken's settled and after Neil Quinlan pointed a free, Andrew Ormonde had his drive for goal well-save by Jack Lanigan, the Sarsfields custodian.

Further points from Nick Keane, Shane Doyle and Michael Egan pushed JK Bracken's in front by the 26th minute, but another brace of Creedon points restored Sarsfields' lead before the interval at which stage they led 0-5 to 0-4 having overcome the loss of Emmet Fogarty who took a heavy knock after twenty minutes.

It was still very much anybody’s game and one expected JK Bracken's to up their tempo in the second half. Instead, after the sides had swapped points on resuming Sarsfields struck a decisive blow when James Armstrong shot to the net following a move initiated by Paddy Creedon in the 40th minute. Earlier Daniel Moloney had a goal-bound shot well saved by Templemore goalie Kuba Beben and with the Thurles lads finding huge gaps in the Templemore defence Urban Nolan marked his arrival with Sarsfields second goal in the 43rd minute with Creedon again the instigator of the attack.

Trailing 0-5 to 2-6 going into the last quarter Templemore were in serious trouble and their situation was not helped by some erratic finishing. A Shane Doyle pointed free cut the deficit to two goals, but Kevin Bracken’s 51st minute goal for Sarsfields, again on the counter-attack, caused the JK Bracken's heads to drop and though Lorcan Roche and Andre Ormond pointed for them before the finish, they never threatened to catch their rivals.

This was a great win for Thurles Sarsfields who now face South opposition in the county semi-final.

There is a lot of talent in this team and also admirable spirit - opponents will under-estimate them at their peril.

Inter-county man Paddy Creedon is the key man on the field both in terms of creating chances (he was involved in all three goals) and in picking off valuable scores, but the speedy Liam McCormack, Kevin Bracken, Cian Stakelum, James Armstrong and goalie Jack Lanigan were others to hugely influence the outcome.

JK Bracken's never moved with the fluency they are capable of and when things were going against them did not respond as would be expected of champions. On that basis, and leaving other considerations aside, they can have no complaints about the result despite the best efforts of Tadhg Nolan, Michael Egan, Lorcan Roche, Shane Doyle, Andrew Ormond and goalie Kuba Beben.