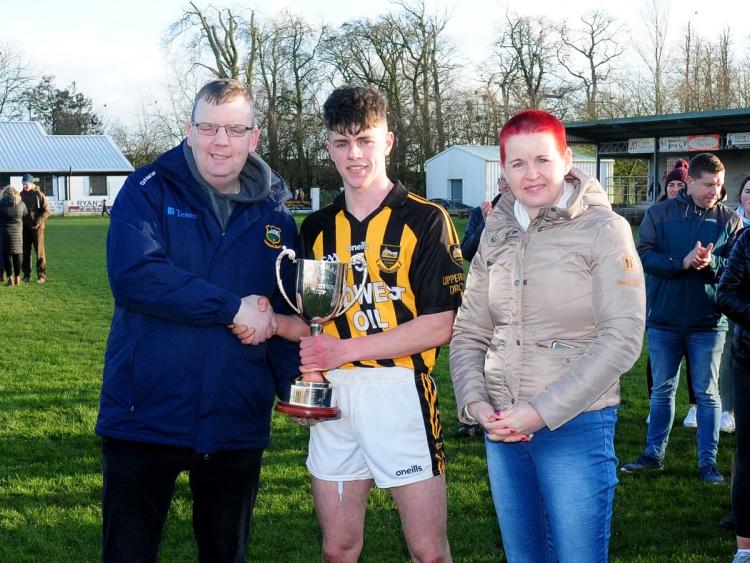 Upperchurch-Drombane were full value for their nine-point win over Loughmore-Castleiney in the Munster Construction Mid Tipperary Under-21B Football Championship final played at Templemore on Sunday.

While the margin of the victory will raise eyebrows in some quarters, it was no surprise to those who had seen Upperchurch-Drombane during the round robin stage of the competition and they carried that excellent form into the decider to see off a fancied Loughmore-Castleiney with a bit to spare.

Loughmore did not deserve to be nine points adrift at the finish, but they cannot complain about losing as Upperchurch were the better team for most of the game and, most importantly, they carried a threat in attack that Loughmore never matched and were always at full stretch trying to contain.

Indicative of this was the manner of the Upperchurch goal in the eighth minute when Luke Shanahan’s free kick was badly defended and an alert Darragh Burke pounced for a goal that gave the winners a 1-1 to 0-1 lead, an advantage they never surrendered.

That goal also gave Upperchurch a bit of breathing space when they were under pressure in the first half as Loughmore enjoyed their fair share of possession without showing a worthwhile return on the scoreboard.

It was a well-contested first half, fairly evenly balanced and at the break the Church were ahead 1-5 to 0-5, Conor Fahey (two) and Luke Shanahan (three) contributing their points to which Conor Ryan (three), Frank McKevitt and Ed Connolly replied for Loughjmore.

At this stage nobody was predicting a nine-point win for either side and after thirteen minutes of the second half, Upperchurch had slightly increased their advantage with two points from Luke Shanahan to Conor Ryan’s effort for Loughmore. It was still anybody’s game though Upperchurch were enjoying more of the play.

Things started to go haywire for Loughmore now as they lost Michael O'Connell to a black card which left them a man short for the next ten minutes.

Upperchurch had the look of winners about them and Loughmore needed something special to redeem the situation, but nothing was forthcoming.

Conor Ryan pointed for Loughmore in the 52nd minute, but then they had Darragh McCahey sidelined and though the initial black card sin-binning was over, they were still a man short.

Upperchurch’s superiority became more and more pronounced as the game reached its conclusion, Loughmore’s resolve having been broken.

The attention that the Upperchurch club is paying to football at underage level is certainly paying off and they are now one of the stronger dual code clubs in the division and county and capable of competing with the best around. Donal Hayes and his back room team certainly had their charges primed for this contest and they duly reaped the rewards.

While Luke Shanahan was the stand-out man both in terms of scoring and general play, Conor Fahey, Pat Ryan, Michael Lavery, Patrick Purcell and AJ Shanahan all played important roles in the win.

Things did not happen for Loughmore-Castleiney with passes frequently going astray and possession conceded too easily. Their attack registered only two points from play, certainly not what is required to win a championship, but full marks go to Conor Ryan, Frank McKevitt, William Creedon, Ciarán Connolly and Ed Connolly who were always the forefront in their challenge.