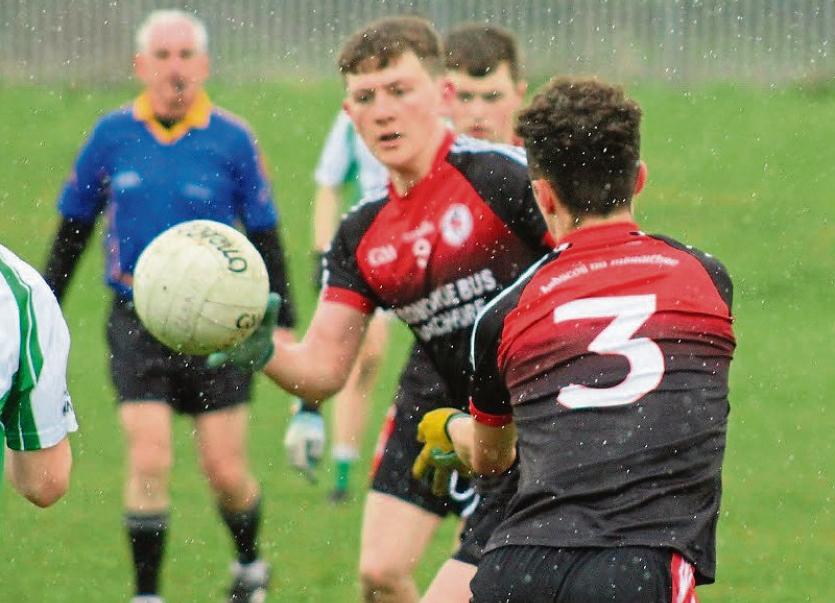 High School’s Eoin McCarthy about to receive a pass from Tadgh Condon.

The High School, Clonmel regained the McGowan Cup with a strong display against the Abbey CBS, Tipperary on Wednesday last,  March 11 in front of a sizable crowd in Ned Hall Park, Clonmel.

The Abbey had reached the Munster B final and overcome defending champions Cashel Community School in the semi-final while the High School failed to progress from their Corn Úi Mhúirí group but had defeated Our Lady’s, Templemore and had recovered from a nine points second half deficit to prevail against Thurles CBS in their semi-final.

With conditions wet and windy,  the Clonmel side started with the wind at their backs but it was the Abbey who opened the scoring with a free before the High School settled with 4 scores in a row from Mark O’Connor (2), Cathal O’Mahony and an inspirational score from corner-back and Tipperary under 20 player Brian McKeown.

With conditions worsening, both teams showed great endeavour and honesty of effort but the High School were wasteful in front of goal and the more economical Tipp town side narrowed the gap to leave the scores four points to two after 20 minutes.

The final 10 minutes of the half belonged to the High School men with some great points from Cathal Deely, Joey Lyons and Mark O’Connor (f) before Rory O’Dowd reacted quickest to a speculative ball into the goalmouth and struck the ball past the Abbey goalkeeper to  open up a gap.

High School coaches Dave Nugent and Tony Gleeson would have been pleased to have their team return to the dressingroom with a 1-7 to 0-2 lead. 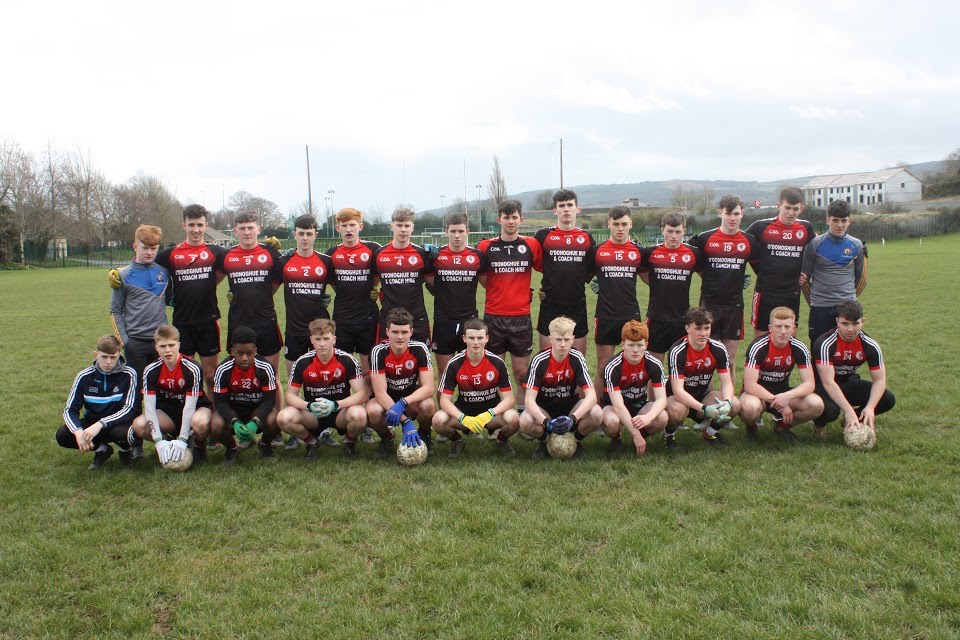 With a gale at their back, the Abbey would have been confident of staging a fightback and they started the second half with an early point to reduce the deficit. The High School responded with a pointed free from the left sideline by Cathal O’Mahony and a point from play from Barry Kehoe.

For all their endeavours, the Tipperary side could only manage two points from frees during their period on top as the High School defense led by captain Tadhg Condon, stood firm, putting their bodies on the line time and time again. A further Cathal O’Mahony point from distance was followed by the clinching goal as Mark O’Connor found the bottom corner after a fluid team move.

The Abbey responded with a point before, once again, they were denied by the excellent Kerton in goal who went full length to deny the Tipperary Town boys  at the final whistle, the High School were 2-10 to 0-6 winners.

This was a great win for the High School and just reward for their hard work throughout the year and throughout their six years wearing the  jersey. Tipperary under 20 panelist Fabian Kerton kept the Abbey at bay with two excellent saves when the game was in the melting pot while Brian McKeown produced a Man of the Match display raiding forward from corner-back.

At midfield, Ben Comerford and Eoin McCarthy worked tirelessly and won a fair amount of ball in the air while upfront Billy O’Connor led by example at centre-forward and Joey Lyons’ strength and ball carrying against the wind saw him a constant thorn in the Abbey defence while Rory O’Dowd and Mark O’Connor took their goal chances .