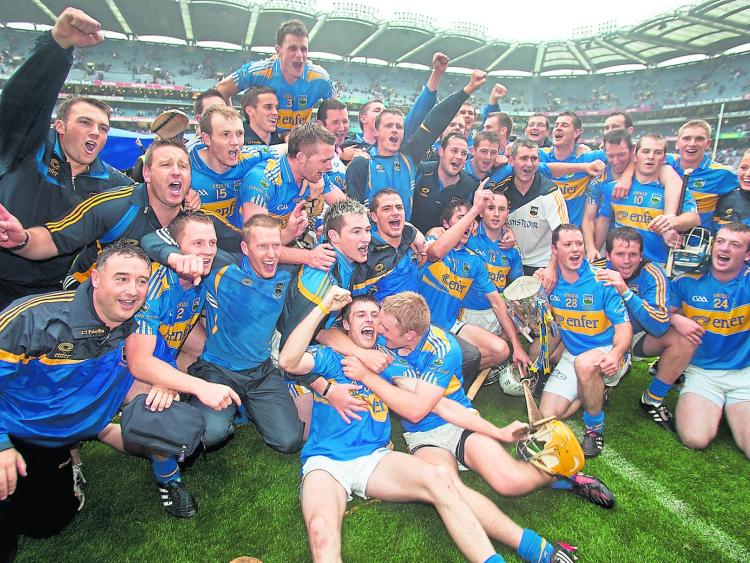 Tipperary footballers have been shaving and dyeing for charity

Check out all your GAA news from Tipperary right here

SHAVE, DYE OR MO - TIPPERARY SENIOR FOOTBALL PANEL
Due to the high volume of interest the Tipperary senior football panel and backroom team shave, dye or mo fund raising initiative to raise money for local charities continues this week. They lads have set a target of €15,000 and with €11,790 reached already the final push is now on to meet the target, so the plea is going out for support regardless of the amount to raise much needed revenue for these worthy local charities.
All funds will go to:

South Tipperary General Hospital
North Tipperary Hospice
C-SAW (Community Suicide Awareness Workers)
The funds raised will be divided equally between these three fantastic local charities and all support is greatly appreciated.
The gofundme link is as follows https://www.gofundme.com/f/tipp-tooball-fundraise?utm_source=customer&utm_medium=copy_link-tip&utm_campaign=p_cp+share-sheet
TIPPERARY GAA CLUBS DRAW
The new Draw was originally scheduled to commence this week but due to the Covid 19 this was deferred to the end of May. The County Draw Committee is due to meet this week to postpone it further but are hoping to tie down a definite date to commence later in the year. A definite start date will be published in this column next week. Final receipts for the draw just completed in March 2020 will be posted out in advance of the commencement of the new draw.

SYMPATHY
There was widespread sadness throughout Tipperary and beyond this week following the passing of renowned singer Nora Butler Swan, R.I.P. and Tipperary Co. Board wishes to offer its sympathy to Nora's family and friends.

The Toomevara native was an All-Ireland champion ballad singer and performer and one of the biggest champions of traditional Irish music in the country. In the early 1970’s she toured the US with Comhaltas Ceoltoiri Eireann alongside the late Paddy O’Brien. She also toured extensively around the world as part of Comhaltas in Asia, Australia, Canada, Tripoli, New Zealand and Libya. Tributes from across the traditional music world have been paid to the Tipperary singer whose unique voice set her apart from an early age. No stranger to the stage, Nora regularly made appearances on national television and radio programmes. Among her prestigious honours are five All-Ireland ballad singing titles, three at senior level and two at under 18 level. During her career she released two solo albums, the first in 2001 titled The Dawning of the Day, and featuring the work of top musicians Billy Greenall, Deirdre McSherry and Eileen O’Brien. Throughout her life Nora acted as a champion for traditional Irish music alongside her late husband Pat who was a champion drummer and a long-time member of Comhaltas Ceoltoiri Eireann. She is deeply regretted by her loving sister Mary (Hartnett), extended family and many friends plus her dear colleagues in Comhaltas Ceoltoiri Eireann.
NATIONAL REFEREES PIETA HOUSE CHALLENGE
Pieta House aren’t able to run Darkness Into Light this year which would have been on this Saturday May 9th, the same date as the first full rounds of Championship in both codes would have kicked off.
The plan is that all 72 National Hurling and Football Referees would do a virtual championship run next Saturday.
Starting at Wexford Park, on to Páirc Uí Chaoimh, up to MacCumhaill Park, Ballybofey, Donegal and finally back to Croke Park, a round trip of 810km.
The average run for each referee would be 11.2km each. So what they have to do is complete the run at any stage on Saturday 9th and post a selfie or video on social media with the #RefereesRunForPietaHouse,

Donations can be made on https://www.gofundme.com/f/RefereesChampionshipRunForPietaHouse

WEBINAR
One of the next webinars to come online is entitled – “Celebrating and Supporting our Officers – A Wellbeing Webinar”. It is aimed directly at officers, and will feature Colin Regan, GAA Director of Community and Health, as well as Alan Kerins and Tom Parsons.

The webinar will feature stories and insights from Alan Kerins (former Galway dual star, social entrepreneur, philanthropist, and performance coach), Tom Parsons (Mayo star and Culture Manager at Jacobs (Engineering Europe) and Colin Regan (GAA Community & Health Manager). The session aims to develop a better understanding of the building blocks of wellbeing and promote the skills and resources that officers’ can utilise to support their own wellbeing. The interactive session will also celebrate the incredible leadership demonstrated by our officers in managing the GAA’s response to Covid-19 on behalf of our members and communities.
The session is being jointly organised by the GAA’s Officer Development Committee and Health and Wellbeing Committee. All Club and County Officers can access the webinar on May 12th at 7pm by visiting: learning.gaa.ie/AdministratorWebinars