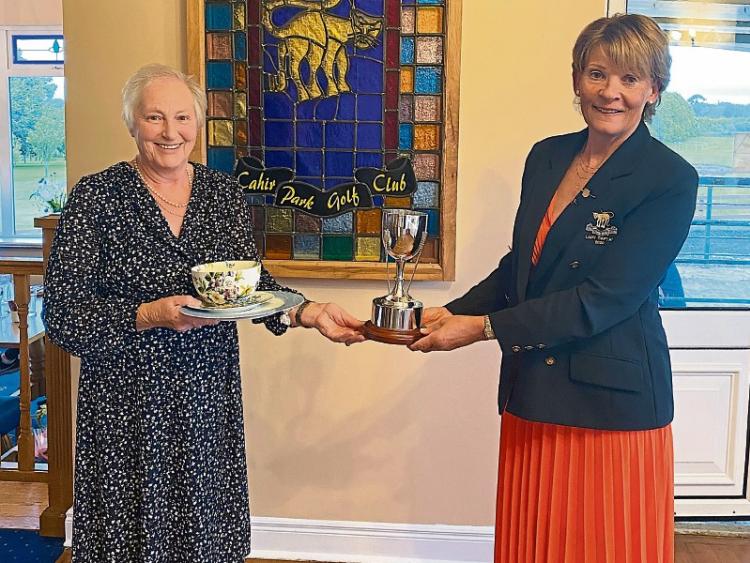 Cast yourself back to 1975 – The Vietnam War ended, Margaret Thatcher became leader of the Conservative Party, the Rubik Cube was invented, the movie Jaws was first screened and, of course, Anne O’Brien won her first Lady Captain’s Prize at Cahir Park Golf Club. On Saturday last, 45 years later, Anne returned to do it all again with an amazing round of 66.

Saturday was the biggest date in the calendar for Ladies Golf in Cahir Park. Susan Carey’s Lady Captains prize.
There was a huge entry and a great feel in the club over the weekend. The prizes were as expected outstanding with first prize being a dinner service. As the day wore on, everyone tried their best to score as best they could in the first stroke competition of the year.
Out on top was the very popular and ever steady Ann O’Brien scoring a jaw dropping 66!! The last time Ann won the Captains prize was in 1975 when her daughter was just six weeks old!! Fair play Ann, as she said herself, it shows no matter what age you are and how long you are playing golf – you always have a shot at winning!
Second place was taken by Michelle Keating scoring 69 nett. This is no mean feat with a low handicap of 16. Well done Michelle!
Gross spot went to Caitlin Fitzgerald – obviously the 3 months off golf didn’t phase her! Unbelievable 73 Nett playing off 13.
Third place went to a well know face in the club – Josie Walsh scoring 70 nett. I am sure she will be delighted and a great boost with third.
In fourth place was Margaret Gill, who has been handicap secretary in the club for many years took next spot with 71 nett – well done.
Next was Jean Rodgers who started playing golf the same day as the Lady Captain Susan Carey. Jean had 71 nett on a countback.
Much anticipated Past Captains prize went to Imelda Buckley.
Senior ladies also had their own competition for a prize on Lady Captains – this went to Alison O’Gorman who is new to golf.
Great to see new faces on the podium!
Best Front 9 went to Yvonne Morrisson and back 9 went to Caroline Maher. Visitors prize went to Eleanor Carroll.
Senior ladies also had their own competition for a prize on Lady Captain’s – this went to Alison O’Gorman who is new to golf h/c 40 with 16pts over 12 holes. Great to see new faces on the podium!
Lady Captain Susan Carey would like to thank everyone for playing and hope it was enjoyable for all. It was a pity due to Covid 19 that we could not have a night in the Clubhouse, but I am sure there will be plenty in the future.