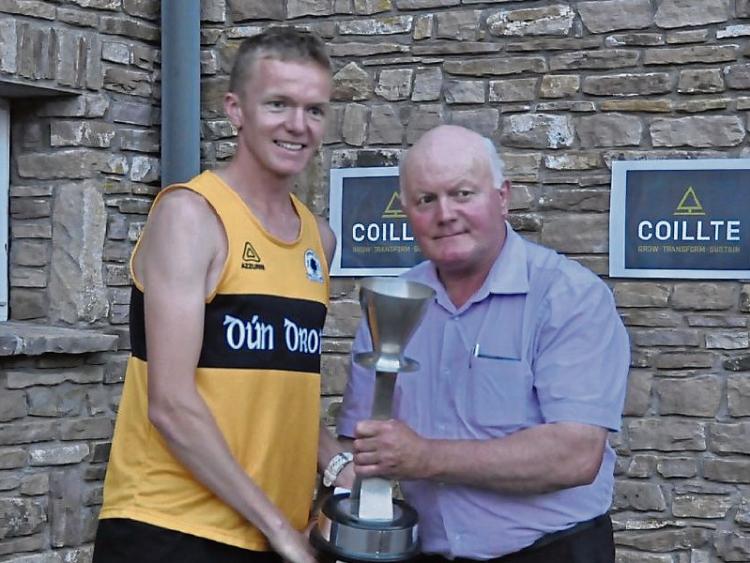 When one considers that the first ten Coillte 10ks back in the eighties and nineties  all attracted fewer than 94 entries (with the exception of 1993), compared with entries around the 300 mark in later years, an entry of 94 for a virtual run was very welcome.

The event was held as a virtual run because of the Covid-19 restrictions.

This trophy was the idea of Dominic Moore, the well-known runner from Upperchurch, famous for his front running tactics and catch-me-if-you-can attitude back in the eighties and ninties.

Dominic donated the trophy to the Dundrum club in 2010 in memory of the iconic athlete Tim Crowe who hailed from Bishopswood, Dundrum.

The trophy is competed  for every year since in the annual 10k road race, which is now in its 35th year.

This year’s winner was Kevin Moore from the local club who, coincidentally, is also from Bishopswood, Dundrum and was winning the trophy for the third time.

The other athletes to win the trophy over the past 10 years were Danny Smith, Ballynonty (who won it five times), Christopher Bracken, Thurles Crokes (once) and David Mansfield, Clonmel on two occasions.

Tim Crowe was a legendary athlete, winning 15 national cross country championships from 1907 to 1920, which were noteworthy among his many athletic achievements.

Eldery neighbours recall stories of him training in the local fields with four clocks in each corner to time himself as he raced around more than 100 years ago.

He also went as trainer with the Tipperary hurling team on their famous three-month trip to the cities around America promoting the game in 1927.

Parish Priest Fr. Jim Egan, from the Knockavilla /Donaskeigh parish, in which the village of Dundrum is located, organised a marble plaque to be erected in Tim’s memory by the local FAS group some years ago.

This plaque is appropriately enough located at the entrance to the Dundrum AC running track at the Scout Hall Complex in Dundrum.

The winners of the four races - Kevin Moore, Dymphna Ryan, Paudie Coen and Ciara O’Neill, along with the other sixteen finishers- will receive the much sought-after souvenir embroidered hand towel.