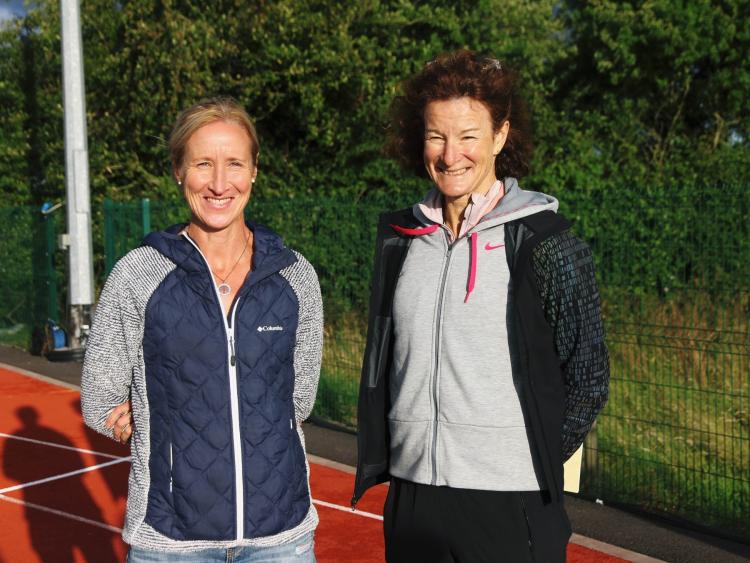 What a great day of competition at this year’s Moyne AC Summer Games.

While most of the talk in the lead up to the games was in relation to these two evens there was some cracking races with Molly Scott and Marcus Lawlor both of St. Laurence O’Toole, Sarah Quinn, St. Colman’s South Mayo AC, Sophie Becker, St. Joseph’s AC and Sharlene Mawdsley, Newport AC to the fore in the sprints.

All the stops had been pulled out to get a top-class field in the mile and 800mts and to their credit the athletes and coaches responded. Throughout the day showers of rain had fell but the gods seem to be in favour as the sun began to appear before the two main races on the programme. While this was a major boost to the plans, a rising wind with some strong gusts blew up making it extremely difficult conditions for the athletes. But rise to the occasion they all did as first the ladies and then the men took to the track and provided those in attendance and to the hundreds tuned in on-line to two terrific races.

In the ladies 800m Sinead Denny, Dundrum South Dublin, having just recovered from her own race did a perfect pacemaker’s job for the first lap bringing the field through in 29/30 secs for the first 200 and reaching the end of the first lap in 63secs. The record was on and with Nadia Power, Dublin City Harriers hitting the front she forced the pace along down the back straight where the wind was the strongest. Never wavering from her task she hit the 600mts mark just shy of 1.40 and it was all to race for over the final 400mts where with the vocal support of the spectators she pushed hard again to cross the line in 2.05.10 just shy of going under the mark by 200’s of a second.

Behind Nadia, Iseult O’Donnell, Raheny Shamrocks, Katie Kirk, University of Ulster, Jordanstown AC and Aimee Hayde, Newport broke clear of the chasing pack and it was all to run for over the final 100mts where Katie finished the stronger to claim the second spot in 2.06.51 with Iseult third in 2.07.17. Despite not breaking the 2.05 mark, Nadia set a new track record for the 800mts and indeed Katie was also under the old mark of 2.06.67.

The stage was set now for the attempt on the first sub four-minute mile on Tipperary soil and here great credit is due to all the athletes who made this their goal with ten starters including the two pacemakers Gary Campbell and Paul Robinson.
Gary took on the responsibility of leading them through the first 800mts and was right on the mark bringing them through 400mts in 59 secs and 600mts in 1.30 before ceding to Paul Robinson who then took up the mantle keeping the pace strong as only Sean Tobin and Andrew Coscoran kept with the pace as the rest of the field were strung out behind. The wind on the back straight had the athletes pushing hard but reaching 1,200mts in 2.59 the attempt was still very much alive. With his effort done Paul left the way for Sean and Andrew to power home over the final 400mts with Andrew overtaking Sean on the top of the back straight to keep the pace strong. With just over 150mts to go Sean made his break and heading down the finishing straight with the shouts of encouragement ringing in his ears he made every stride count, but the clock thought otherwise stopping at 4.00.38. What an agonising way to finish just 400’s of a second away from dipping under that magical four-minute mark.

The Senior Ladies 800mts “B” race consisted of three heats with two of those taking place early in the programme and the third one headlining before the main 800mts race. In total 18 athletes toed the line in this event with Fiona Kehoe, Kilmore AC coming out on top, but only by 700’s of a second from Ellie O’Toole, Newbridge AC. Both pushed hard for the line with Fiona getting the nod with a time of 2.13.55 with Elie timed at 2.13.62. Tipperary and Nenagh Olympic AC athlete Aoife Delargy came through to take the third spot in 2.15.32. 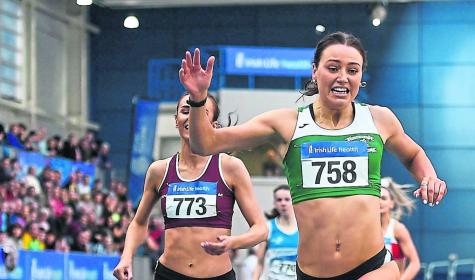 The men’s “B” mile was also split into two heats and the 18 strong field certainly gave it their all with Jonny Whan, Clonliffe Harriers AC taking the victory in a time of 4.15.22 followed by Joe Warner, St. Mary’s AC in Clare in second 4.17.69 with Daniel Stone, Clonliffe Harriers AC/Dublin Track Club taking third in 4.21.93.

Heat 4 of the Senior Ladies 100mts saw sprinting at its best with just a hairs breath between Molly Scott, St. Laurence O’Toole and Sinead Quinn, St. Colman’s South Mayo AC. The electronic timing came into its own in this event with Molly just about shading it running 11.86 to 11.87 recorded for Sarah. Lucy Sleeman, Leevale AC with a time of 12.48 came through the rest of the field of 16 to claim the third spot. Marcus Lawlor, St. Laurence O’Toole powered down the track in the fifth and final heat of the Men’s 100mts, but he had to be at his best to hold off the challenge mounted by Paul Costello, Emeralds AC. Marcus took the win in a time of 10.79 with Paul running 10.83 while Rob McDonnell, Galway City Harriers came through to take the third spot with a time of 10.90

Sarah Quinn, St. Colman’s, South Mayo AC was involved in yet another titanic battle, this time in the Senior Ladies 200mts against Sophie Becker, St. Joseph’s AC but the win came her way this time as she dipped on the line to take the victory in 24.55 to Sophie’s 24.56. The photo finish camera was certainly called upon this time. Sarah McCarthy, Mid Sutton finished third in 25.20. Marcus Lawlor completed the double with a great win in the Men’s 200ms. His strength and power saw him clear of the field to record victory in 21.44. Second place went to Aaron Keane, Tullamore Harriers in 22.21 followed by Dion Marcus, An Riocht AC in 22.67.

Three heats in the Girls U/17 200mts saw 12 girls take to the start line with Lucy Sleeman, Leevale AC showing a clean pair of heels to them all to finish first overall in 25.86. She was followed by Grace Rooney, Youghal AC in 26.63 while Ciara O’Mahoney, Leevale AC took the third spot in 27.20. The Boys U/17 200mts came down to one heat with Tom McCutcheon, Nenagh Olympic winning in 24.19 from Brendan O’Donoghue, Leevale in 24.55 and James Sage, Nenagh Olympic in 25.32. The final races over 200mts involved the junior ladies and men where Aisling Kelly, Taghmon AC and Dylan Roberts, Bandon AC were the winners with times of 25.98 and 23.29 respectively. Kellie Bester, Carrick on Suir and Katie Bergin, Moyne finished second and third in 26.24 and 26.25 while Jack Hickey, Moyne and Sean Mahony, Lios Tuathaill AC were second and third in the men’s event in 23.54 and 23.92.

With four heats in the Ladies 400mts it was the fourth and final heat that came to the fore with Sharlene Mawdsley, Newport winning convincingly in 56.31 from Niamh Malone, Monaghan Phoenix in 58.10 followed by Caoimhe Cronin, Le Cheile Ac in 58.27. In the men’s event Rob McDonnell, Galway City Harriers AC had a great victory in 48.94 followed by Cathal Locke, Dooneen AC in 49.08 and John Fagan, Clonliffe Harriers third in 50.23. In the master’s Men 400mts Kevin Lynch, Lios Tuathaill AC got the better of John Whiriskey, South Galway AC with tie of 54.27 and 56.18 respectively.
The senior ladies 4 x 100mts relay came down to three teams with Leevale taking the honours in 51.25 followed by Carrick on Suir in 51.84 and Moyne third in 52.88.

The programme couldn’t be complete without the results from the Weight for Distance. The ladies’ event was won by Genevieve Rowland, Templemore with a massive throw of 6.13 which appears to be a new national masters record for the 26lb, yet to be confirmed. Second place went to Naomi Morrissey, Moyne AC with a throw of 5.31 with Siobhan Hennessy, Templemore third on 5.10. John O’Dwyer, Templemore won the men’s 56lb event with a throw of 7.25 followed by Sean Mockler, Moycarkey-Coolcroo who threw 6.82 with Ned Dwyer, Moyne AC, in third place with a throw of 5.07.
A sincere thanks to all the athletes and coaches for their support for this year’s event. With such top-class action this has certainly put the club on the national map.

The live streaming worked a treat and our thanks to Star Systems for their workmanship which at one time had 800 viewers online and again the comments were most positive. Amongst the notable people in attendance were Rob Heffernan, Sonia O’Sullivan and Catriona McKiernan and for such a small club in a small rural area this was very much an honour for the club.
To Chris Regan, our starter, Jim Ryan our timer and both John Moore and Feidhlim Kelly on commentary a sincere thanks. To all our stewards a massive thanks for all your help as it would not be possible for the club to run such an event without your efficiency whether it was at the car park, call room, entrance gates, Covid officers etc A final note of thanks to all our sponsors, we very much appreciate your support.