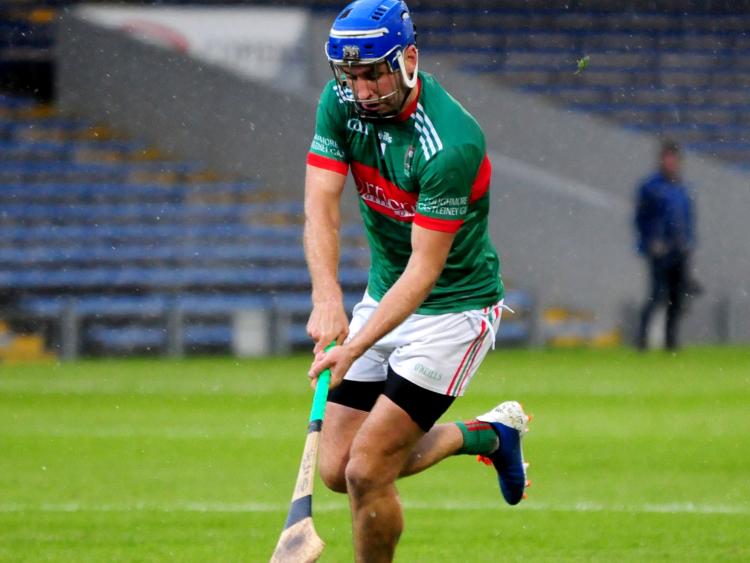 John McGrath, in action for the Loughmore Castleiney hurlers last weekend, will swop the sliothar for the football on Saturday

Divisional senior championships will begin soon, apart from in north Tipp where a decision has been take to not host one this year.

Loughmore Castleiney will bid to make it to their second county final in a seven days, when they take on Moyle Rovers in the FBD Insurance county senior football semi-final at the weekend in Boherlahan - the winners will tackle holders Clonmel Commercials in the final on September 20.

The mid Tipp men produuced a fantastic performance to trounce a fancied Nenagh Éire Óg side on Saturday evening last in Semple Stadium in the hurling semi-final and they now face Kiladangan in the decider - Kiladangan comprehensively defeated a disappointing Drom Inch in the second semi-final played on Sunday evening.

The outing against Moyle Rovers will see the Loughmore Castleiney men take to the field for a ninth consecutive weekend and when they come to play the hurling final, it will be a straight ten. But, they won't mind one bit - winning is a habit and right now they are in the habit of winning games. The momentum gained is carrying them onwards and they have designs on winning the two championships, if they can keep the ball rolling in the right direction.

There is hurling action this weekend also in the relegation stakes with Burgess taking on Eire Og Anacarty in the senior grade; and Galtee Rovers/St Pecaun taking on Golden Kilfeacle in the intermediate. There is also an intermediate football relegation game between Borrisokane and Kiladangan down for decision - an important game for both clubs.

And, in the county intermediate hurling championship, a mouth watering all-mid clash between Moyne Templetuohy and Boherlahan Dualla in the semi-final takes place in Littleton on Sunday; while Gortnahoe Glengoole take on Knockavilla Kickhams in the second semi-final in Holycross - two very attractive games also.

This week also sees confirmation of the divisional senior hurling championships taking place in the mid, west and south divisions. However, North Tipperary has decided not to go ahead with the divisional championship following a meeting of the CCC. The clubs will be required to play without inter county players in these championships which will commence in the coming weeks, while the u-21 championships are also set to commence very soon.

See County Board website for details of games to be streamed this week.