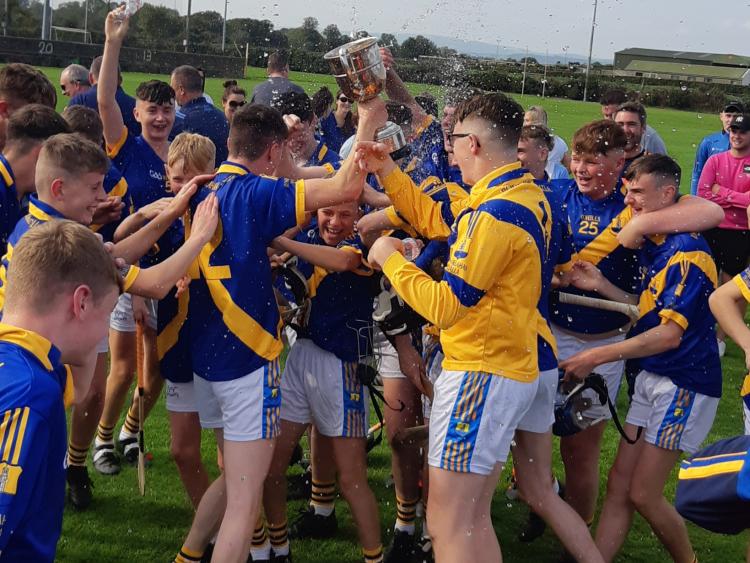 County Under 16 B Hurling Final

This final was not for the fainthearted as these two formidable and unrelenting teams went at it hammer and tongs during over 60 minutes of quality hurling in a balmy Golden on Saturday.

The majority of the spectators opted to stay out of the stand and on the Cashel side to catch some of the overzealous rays of sunshine that were beaming down on the September afternoon.

Despite the heat, a swirling wind was blowing on the pitch. Boherlahan got off to a fast start despite going two points to nothing down in the opening two minutes after scores from Knockmealdown Gaels’ Dylan Morrissey and a free from Oisin Ryan.

Knockmealdown didn’t panic though as Oisin Ryan et al chipped away at the lead as he and Boherlahan’s Dylan Fogarty exchanged frees and 65s while Boherlahan’s Paddy Gahan got two super points from play within seconds of each other after 25 minutes.

Chris O’Donnell, who was superb for Knockmealdown, also chipped in with a great point on 26 minutes as the south Tipperary team rallied - with the help of a point of the match from Cathal English on 28 minutes following the early onslaught from Boherlahan.

Knockmealdown went in at half-time on eight points to Boherlahan’s ten and it was clear that this game would go down to the wire.

With just over a minute gone in the first half Evin Hyland found the net for Knockmealdown Gaels but Boherlahan hit back straight away through Paddy Gahan who buried the ball in the net thirty seconds later at the other end to bring the scores to 1-10 to 1-08 in favour of Boherlahan.

The teams again exchanged scores but Knockmealdown had closed the gap and after the water break they came out with a real belief that they could drive on and win the game.

Their roar coming out of the huddle was heard all around the grounds. Something had shifted in their mindset.

Knockmealdown Gaels went from drawn at 1-11 to 1-11 at the water break fifteen minutes into the second half to going 1-15 to 1-12 up with eight minutes remaining in the game.

Dylan Fogarty had been overheard telling his teammates at half-time that the first score of the second half would be very important. But it was the last four scores of the game that would come to matter and Boherlahan would score all of them.

It was very much a cometh the hour, cometh the men moment as Boherlahan trailed by three points with just a few minutes remaining.

It started with a captain's score, Dean Mulcaire stepped up to slot a point.

Then Dylan scored two supremely difficult frees - one from inside is own 65 and a second free from the village side of the pitch 45 yards out.

It didn’t seem to matter where he was hitting them from, as he put the sides all square and heading towards extra time.

No one, however, had accounted for Boherlahan substitute Tommy Breen, who came on to the field with fifteen minutes to go.

The son of Conor and Kate, he had had enough of Boherlahan’s near-misses and valiant defeats. Today was a day to bring the cup home to the village.

He snapped up the ball on the Knockmealdown 21-yard line after a zippy pass from the omnipresent Jake Canny.

Tommy deftly turned to his right to give himself some room and slotted it straight between the posts and landed the ball somewhere in Bansha.

It was all over as Boherlahan clinched the crown at the death, on a full-time scoreline of 1-16 to 1-15.

It was heartbreak for Knockmealdown Gaels but they will be back again. There is certainly a county title in that talented team. In a day when both teams were heroes to a man, it is worth noting one individual in particular.

The left corner back for Boherlahan, John Trainor, played an outstanding game and hoovered up a huge amount of ball.

It is a thankless position and the result could have been very different were it not for John’s effort at times during the game.

At a very young age, he appears to have mastered the art of being a corner back. He is a young talent worth keeping an eye on.

Cormac Gleeson in goals for Boherlahan also deserves a special mention and play brilliantly throughout the game.

After the match, Martin Bourke, a Boherlahan native and chairman of Coiste na nÓg in Tipperary, described the U16 B County Hurling title as one which had eluded the parish for a long, long time.

A Boherlahan team had never won the the Corn na Banban Arna Bhronnadh Cup in the club's history.

As Martin presented the cup to Boherlahan captain, Dean Mulcaire, tears streamed down the faces of those gathered around.

The trophy eluded the parish no more as gallant Boherlahan boys became men.

Man of the Match: John Trainor from Boherlahan