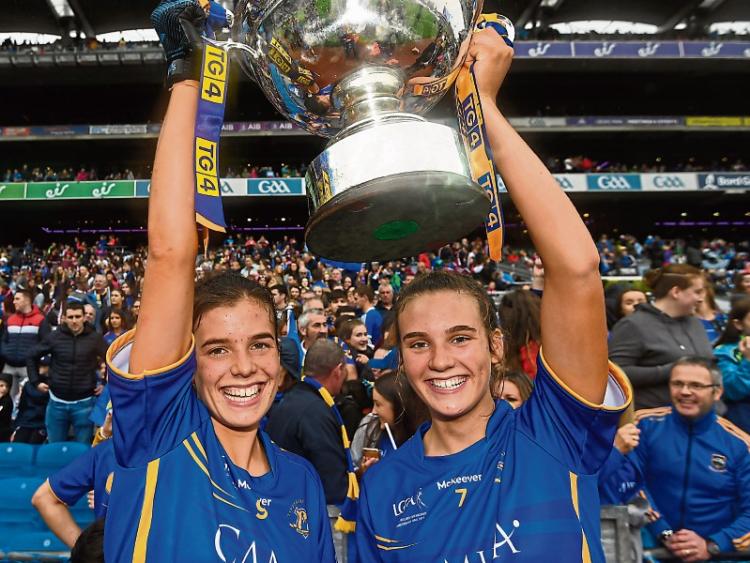 Sisters Anna Rose Kennedy, left, and Caitlín Kennedy will be hoping to steer Aherlow to the County Senior Ladies Football title when they play Cahir in the final in Tipperary town on Sunday

Another busy weekend for Tipperary Ladies Footballers lies ahead, with eight finals to be played between this evening, Thursday and Sunday.

With restrictions in place on the number of spectators allowed to attend, admission to all games over the weekend will be by ticket only, and can be purchased through the respective clubs at a cost of €10.

All clubs have been furnished with the full details.

However we are pleased to announced that Tipperary Ladies Football County Board, with the aid of sponsors, will be streaming the Senior A, Intermediate and Junior A Championship Finals live from 11am on Sunday morning.

The  Senior A Final will take centre stage on Sunday afternoon with throw-in at 2pm in Sean Treacy Park, Tipperary town. Holders Aherlow will take on the 2018 champions Cahir in an eagerly-anticipated clash.

Just a single point in favour of Cahir separated the sides when they met in the initial stages of their group but this will matter little when the sides line out on Sunday.

Cahir ended Brian Boru’s run in county finals with a hard-earned two point victory. Cahir, who were trailing at the break by six points, knocked out the 2019 finalists when they made an amazing comeback in the latter stages of the second half, with Aishling Moloney and Aisling McCarthy doing most of the damage.

Aherlow, in their semi-final had a nine-point cushion over Clonmel Commercials. Aherlow were trailing by a single point at midway.

However, the introduction of Anna Rose Kennedy at the break spurred them on and they managed to hold Commercials to just a single point in the second half. The surprise return of Anna Rose just ten months after her cruciate injury was inspiring but whether she will feature in the starting 15 on Sunday remains to be seen.

In a tough clash to call, both sides have big names in their ranks. Cahir’s Aishling Moloney, Aisling McCarthy, Rosanna Kiely and Roisin Howard are all key players and the prospect of seeing them going up against Aherlow’s Caitlin Kennedy, Emma Morrissey, Brid Condon and Anna Rose Kennedy  is certainly enough to whet the appetite.

Proceedings will throw in at Sean Treacy Park at 11 am when Thurles Sarsfields  take on last year’s Junior A champions Galtee Rovers. Sarsfields had the upper hand on Galtee Rovers when they met in the group stages, defeating them by 9-11 to 3-9 on that occasion.

The 2019 Intermediate finalists, who lost by just two points last year have been knocking on the senior door for a number of years now and their camogie victory last weekend will also be a help to them. Galtee Rovers are a very young side but after their hard-fought victory over Boherlahan in the semi-final they will have learned some valuable lessons.

Sarsfields would have to be seen as hot favourites going into this game, but as they say youth has no fear and anything can happen on finals day.

Rounding up proceedings on Sunday in Sean Treacy Park will be Ardfinnan, who will take on Moyne/Templetouhy.

The two sides couldn’t be separated when they met in the group stages and so have set up an exciting game on final day when they throw in at 5pm.

Ardfinnan, who lost out narrowly to Moycarkey Borris after extra time in the semi-final of last year’s competition, will feel they have a point to prove. However the young and determined Moyne/ Templetouhy side, who haven’t lost a game all season won’t be inclined to let that happen too easily and it will be all to play for.

The  finals weekend have a long lead-up and will begin on Thursday when Fethard take on Templemore in the Senior B  Final in Ballyporeen at 8pm.

Both sides are recent promotions to the senior ranks and have several senior inter county players between them. Fethard had a tough battle to overcome Moyle Rovers in their semi-final encounter and came from seven points down at half time to run out winners by 3 points.

Meanwhile, Templemore had a bye into the final. This will be an exciting showdown and one that will be played under lights.

On Friday night September 25 Arravale Rovers will take on Moyle Rovers in the Junior C Final in Duneske at 8pm.  Arravale saw off Clerihan in the semi- final  with a comprehensive seven-point victory.

Arravale Rovers, who won the U-19 C Final last year, have been building steadily at underage and will be anxious to build on all the hard work they have put in. Moyle Rovers also topped their group and won’t make it easy for Arravale in the final. This is Moyle Rovers’ second team and had a  five-goal victory over Cahir’s second team in the semi-final.

On Saturday September 26 the Junior B Cup Final will feature Sliabh na mBan and Gortnahoe Glengoole. Sliabh na mBan had a very comprehensive victory over a 14-player Silvermines team in their semi final, winning by 4-16 to 1-3. Sliabh na mBan topped the group, winning  two out of three of their games and only losing to Holycross/Slieve Felim by the slimmest of margins.

Gortnahoe also won two out of three of their games in the group stages, their only loss coming at the hands of Sliabh na mBan. However Gortnahoe had a much tighter battle with Holycross/ Slieve Felim Rapparees, where just 4 points separated the sides in the semi-final.

The other finals to be played over the weekend include the following: