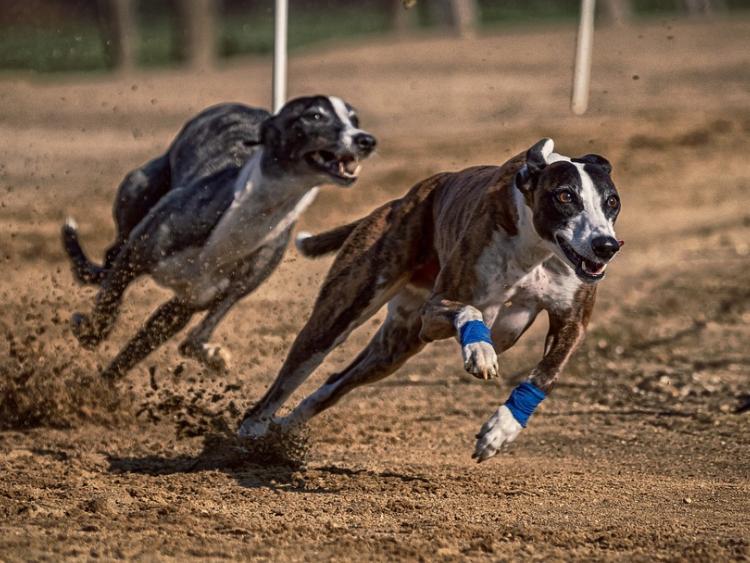 All the action from the Thurles track

A brilliant strike rate from a most consistent performer

One of the most consistent performers at Thurles Greyhound Stadium over an extended period, Patrick Kelly & Michael Skeahan’s Railteen Dara (Laughil Blake-Stuckeybawn) has maintained a wonderful strike-rate in 2021 and claiming back-to-back victory on Saturday, returned the fastest time over 525 yards.

Excepting her run to the semi-final of the Champion Bitch Stake in late February, the July 2018 whelp has now won six of her last seven graded races which have all come in A2, and this latest eighth career win was a thriller!

Breaking well from trap 2, Railteen Dara contested the lead on the inside of a line of four runners throughout the initial exchanges but crucially defending the inside on the approach to the turn, command of the rails saw her readily take control while skipping clear to the back-straight.

Five lengths to the good at halfway, Errill Daithi would emerge as the main threat with impressive pace to the closing bends an maintaining his challenge, began to rapidly reduce the arrears from the home turn. Always resolute when on the bunny however, Railteen Dara defended a shorthead margin at the line when posting a slick 29.20 (-20).

Origi scores smart sprint success
There were further impressive sprint returns at Thurles this week with the swiftest of those coming in the S3 330-yard contest where the PJ Peackock trained Ratchies Origi (Over Limit-Ballymac Nor) shed his maiden tag at the fifth attempt when finding smart improvement for B-K Syndicate.

The lightly raced January 2019 whelp had twice gone close in similar events of late and again only moderately to stride this time, appeared to have a tough task on his paws when almost two lengths adrift in the very early strides.

Displaying powerful pace once in full flight however, the Peacock charge readily overhauled pacesetter Monkeys Ruby on the run to the corner and turning with two lengths in hand, bounded clear to the home-straight. Maintaining a powerful gallop to the line, Ratchies Origi posted a slick 17.86 (-10) with five and a half lengths to spare over the running-on Liberty Express.
The remaining 330-yard contest on Saturday came in S5 grade and also returned a hugely impressive winner as the Declan Byrne trained Laughil John (Droopys Jet-Laughil Alice) went back-to-back in his career start for Paul & Mary Jennings.

Successful over the minimum trip in his Clonmel debut, the August 2019 pup found smart progress following a level start from trap 2 and edging to a lead over Busy Busy in the early exchanges, dominated thereafter. Impressively stretching to his five and three and quarter length winning margin at the crown of the turns, Laughil John posted a smart 17.96 (-10) over Busy Busy who occupied second throughout.

Stan sheds maiden tag in style
With a hugely competitive career start which saw Joe Shanahan’s Crickleowl Stan (Ballymac Eske-Crickleowl Bee) fill second in each of his four races, a change of fortune was forthcoming for the promising April 2019 youngster when deservedly shedding his maiden tag in Saturday’s A4 570-yard event.

Contesting in A3 grade last time, the Shanahan charge was plausibly graded but trailed the field on the long run to the bend before negotiating his way through rivals while turning. Gamely advancing to second when straightening along the back-straight, he firstly shook off the attentions of Fastnet Bizarre before setting sights on pacesetter Bull Run Buddy at the closing bends. Staying stoutly, a rails run off the final turn saw Crickleowl Stan readily overhaul that long-time leader before running out a comfortable three length winner in 31.74 (-20).

A second 570-yard contest on the night also brought an overdue success for Sean Kenny’s Gunboat Showman (Laughil Blake-Dynamic Trend) as he gained reward for recent placed efforts, scoring his first victory in almost a year while claiming the A1 event.

Catching the eye with strong staying efforts over shorter in the capital of late, the June 2018 whelp was always likely to appreciate the extended trip on his Thurles racing debut and swift to stride from trap 3, he never sighted a rival when leading throughout a three-length verdict over the strong staying Onyourway in 31.84.

Back over the standard trip, and following debut victory, Michelle Dwan’s Borna Aoife (Droopys Jet-Borna Central) got to grips with graded company for a second win from three starts while claiming the concluding A4 race in dominant fashion.

Breaking just off the pace from trap 3, the February 2019 whelp approached the first bend amidst a tightly packed field but holding strong in the face of bumping, narrowly repelled Daithis Main Man to the top of the back-straight. Drawing clear of that rival to halfway, Borna Aoife saw out the trip stoutly thereafter with six and a half lengths to spare at the line in 29.39 (-20).

Another to secure a first race victory on Saturday, Monadreen Pearl (Kinloch Brae-Laurdella Jane) returned from a short layoff in sparkling form, gaining reward for her competitive career start at the ninth time of asking for Bernie Fitzsimons.

Taking full advantage of an ease in grade for the A6 525, the May 2019 youngster found her best break from trap 5 and extending to a one length lead, swept the opening turn at pace before effectively settling the race when three lengths clear of Shiny Coat to the back-straight. The latter would gallantly reduce the deficit from halfway, but a sustained challenge fell short by the minimum margin as Monadreen Pearl posted 29.41 (-20) in her maiden success.

A runner in cracking form, Saturday’s A3 525 saw Stephanie Ryan’s Knockalton Conor (Silverhill Shay-Kitmins Denise) register back-to-back victories in the grade and the John Byrne charge will seek a hattrick next time following another game performance.

Ideally housed in trap 1, the November 2018 whelp paced up well on the inside of the field in the early exchanges and defence of his rails pitch saw the Byrne charge take command on the run to the back-straight. Two lengths in advance of Downbytheabbey at halfway, that rival would draw level on the inside at the closing bends but defiantly rallying to the home stretch, Knockalton Conor battled bravely for a half-length verdict in 29.50 (-20).

Having commenced her career with a brace of victories at Thurles, Thomas Jordan’s Oakfield Zena (Ballymac Vic-The Other Maddie) returned on Saturday for a third win from five outings when a dominant winner of the A5 525.

A strong runner at the standard trip, the April 2019 youngster used her rails pitch to good effect when striking the front between the opening bends and leading Clondotty Pairic to the back-straight, completed in comfortable fashion when drawing clear to a five-length verdict over that same rival in 29.47 (-20).

A sole novice contest on Saturday, the opening ON3 525 returned a most impressive winner when Tina Morrissey’s Abigails Power (Belles Direction-Geelo Lu Lu) recovered from a slow start for a hugely game debut score.

Only fifth to the opening bend, the August 2019 pup sneaked past rivals on the inside while turning and set sights on pacesetter Brave Santini from three lengths adrift at the top of the back-straight. Reducing the deficit in company with Tarsna Soda, that pair flanked Brave Santini on the run to the line, but it was Abigails Power who prevailed by a half a length in 29.73 (-20).

Completing a large set of maiden winners on the night, the A7 525 saw Anthony Fahy’s Triangle Alfie (Droopys Jet-Triangle Maui) get off the mark at the ninth time of asking when tracking pacesetter Toomevara Mist to the back-straight before impressively settling the race beyond halfway. Drawing clear to a facile seven length verdict, he posted 29.56 (-20) after Joe O’Neill’s Heavens Dexter (Over Limit-Cabra Charmer) also shed his maiden tag in the A8 525, clinging to a shorthead verdict over Foxrock Callum in 29.97 (-20) having shown smart early pace to lead throughout his third race start.

Top Dog
Ratchies Origi (Over Limit-Ballymac Nor) displayed high-class early pace in his S3 330-yard victory and can be a major player in the top level of sprinting when sharpening his break.

Best Bitch
Railteen Dara (Laughil Blake-Stuckeybawn) remains a real favourite at the Premier circuit with a hugely impressive strike-rate and she will be tough to contain in her hattrick bid next time.

Most Impressive Debut
There was much to like about the debut victory of Abigails Power (Belles Direction-Geelo Lu Lu) on Saturday, getting up close home following a poor start and he looks open to imminent progression in graded company next time.

One To Watch
Just a half a length adrift behind Abigails Power while third in their novice clash, Geoff Parnaby’s Tarsna Soda (Skywalker Rory-Dunclone Cannon) displayed all the pace of the winner following early crowding and retains obvious scope for progression next time.