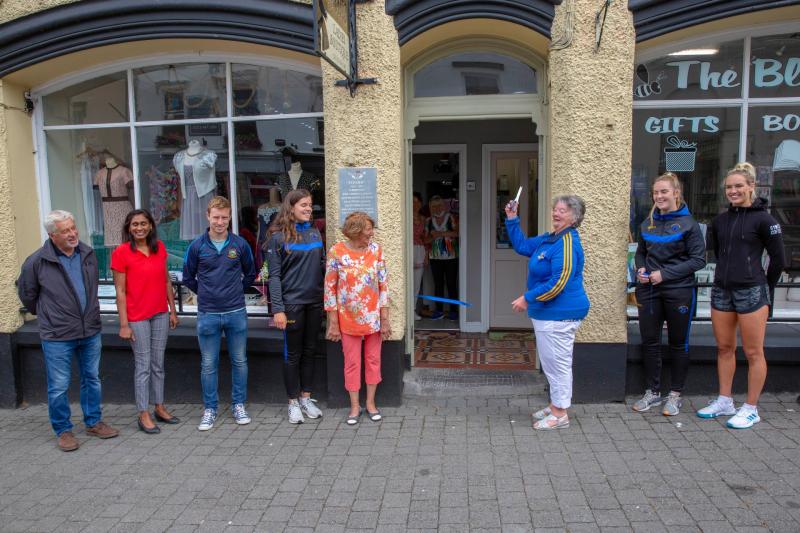 Our Charity Shop which aims to raise funds for South Tipperary Hospice was officially opened on Tuesday afternoon August 27th last at Castle Street, Cahir. The Shop was Officially opened by our Honorary Life President Mrs. Olive McDonnell.
Speaking at the opening, Chairperson Tipperary LGFA, Lar Roche thanked Olive for travelling to Cahir for the occasion remarking that it was her first official duty since her appointment late last year. Continuing he spoke of the importance of the work South Tipperary Hospice and the need to support such a worthy cause. The Chairman also commended the determination and hard work of Mrs. Biddy Ryan in making the shop a reality
Also in attendance at the opening were Tipperary Senior Ladies Footballers Orla O'Dwyer, Aisling McCarthy, and Anna-Rose Kennedy, as well as Denis Kenneally, Tipperary Senior Footballer Brian Fox, and Sinaida Jansen, Manager of South Tipperary Hospice Movement. A presentation of flowers was also made to Olive by Tipperary Ladies Footballers.
The Shop, which is located at Halpin House on Castle Street, is open Monday - Saturday from 10am - 5pm. Volunteers are needed for the shop and anyone who wishes to volunteer can contact Biddy on (087) 236 7719.

TG4 All Ireland Senior Ladies Championship
Tipperary will play Kerry on Saturday August 14th next in Mallow in their Relegation Play-off. Throw in for this game is fixed for 2pm.

U14 Munster Championship
Our U14s will play Cork on Tuesday night August 3rd in Ballyporeen in their second game of this championship. Throw in for this game is fixed for 7pm.

Munster Minor Championship
Our Minor Ladies will get play the opening round in the Munster A Championship on Thursday August 5th next when they play Cork at Bride Rovers GAA Grounds, Rathcormac, Co. Cork Throw in for this game is at 7pm.

U16 Championshp
Hard luck to our U16s who were defeated by Kerry in Killarney on Wednesday evening last July 28th on a scoreline of Kerry 6-10 Tipperary 4-2. They now await the winners of Group B to decide who they will play in the Munster B Final.

John Kennedy Motors U21 League
The pairings for the Semi Finals of our U21 League have been decided and have been sent to all the Clubs.