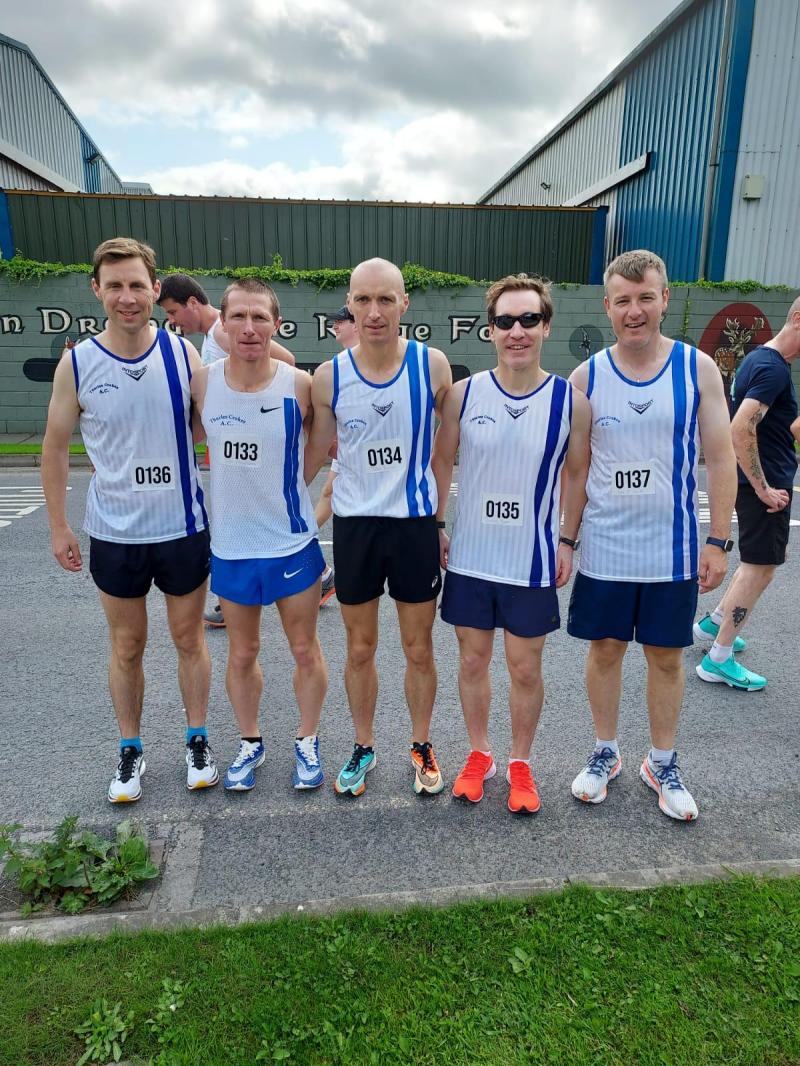 The Thurles Crokes team which won the team prize

The races took place at Dundrum

Dundrum was the setting last Sunday for the County Senior Women 5K and Men’s 10K road Championships. Both races were sent on their way at the same time with the Women competing over one lap and the Men competing over two laps by the starter, County Chairman Billy Purcell.

In the women’s race the leading group of four included Dymphna Ryan of Dundrum and the Clonmel trio of Courtney McGuire, Hannah Steed and Maire Claire McCarthy with Courtney setting a strong pace. This pace soon paid dividend as she moved into the lead midway through the race with Dymphna in close attention. Then over the final km Dymphna took up the pace and as they came back into the village she had a slight lead which she extended all the way to the line to come home a very worthy and convincing Champion to retain her title and set the tone for her beloved County, Limerick, later in the day in Croke Park.

In the team event the Clonmel trio of Courtney, Hannah and Maire Claire were convincing winners of the Anne Mullaney Perpetual Cup and thus helped their Club to retain the title for another 12 months. The Silver Inter Club medals were won by the Dundrum trio of Dymphna Ryan, Catherine Fogarty 7th (20:57) and Karen Coughlan 10th (21:19). The Moyne trio of Sharon Cantwell, Aisling Maher 9th (21:14) and Sinead Tynan 11th 921:27) won the Bronze medals.

The Gold medals in the B Section were won by the Clonmel team of Aisling English, Marian Quinlan 12th (22:41) and Jennifer Quinlan 13th (23:12).
The Men’s race over 2 laps was also very competitive. Here a group of four athletes soon set the pace. The group consisted of Kevin Moore of the host club and defending Champion, John Fitzgibbon of Thurles Crokes who won the County Masters race in Clerihan recently, the County Intermediate Champion Paul Minogue of Clonmel AC and the eventual Champion, Gary Scully of Nenagh Olympic who was winning his first County Senior title. This group was still together as they left the village for the 2nd and final lap.

Then at around 6K John Fitzgibbon increased the pace that soon saw himself and Gary Scully go clear with Paul and Kevin slightly adrift. Then as the leaders approached 8K Gary moved clear and soon after 5 miles Paul had moved into Silver medal position with John 3rd and Kevin 4th.

As they came back into the village Gary had a good lead which he held all the way to the line to come home very worthy and convincing Champion in 33 mins 14 secs.

Then we had Paul Minogue winning the silver medal in 33 mins 30 secs. John Fitzgibbon held off the fast finishing Kevin Moore to win the bronze medal in 33mis 58 secs with Kevin 4th in 33 mins 59 secs, great running all round.

For the record John Russell of Thurles Crokes was 5th in 34:49, Paddy Cummins of Moycarkey Coolcroo was 6th in 35:10, Dermot Gorman of Carrick on Suir was 7th in 35:35 and Barry Hartnett of Mooreabbey Milers was 8th in 35:51. In the team event with seven of the top eight athletes all from different Clubs, the team event was very competitive.

However the defending Champion, Thurles Crokes, with John Russell running a brilliant 2nd lap when finishing 5th along with John Fitzgibbon 3rd and great performances from both Liam Shanahan 13th (38:07) and Declan Ryan 15th (38:16) ensured that the Cup resided in the Catherdral town for another 12 months, great effort all round and achieving three in a row Inter Club success.

The battle for the Silver and bronze medals was very close with only 8 points separating 2nd and 4th. In the end the Silver medals were won by the Mooreabbey Milers quartet of Barry Hartnett, Tom Blackburn 10th (37:04), Willie O Donoghue 11th (37:45) and Liam Lewis 22nd (39:55). The host Club, Dundrum, held off the Carrick on Suir challenge by just two points to win the bronze medals and their team consisted of Kevin Moore, Martin Keane 9th (36:21), Michael Moore 23rd (40:28) and Ben English 33rd (46:10).

At the presentation of the Awards the County Chairman, Billy Purcell thanked Dundrum AC for promoting two very successful events, he also thanked the Order of Malta for covering First Aid. He also thanked the Clubs for supporting two great races which were very competitive and all roads now lead to Galbally on September 12th for the County 10 miler.