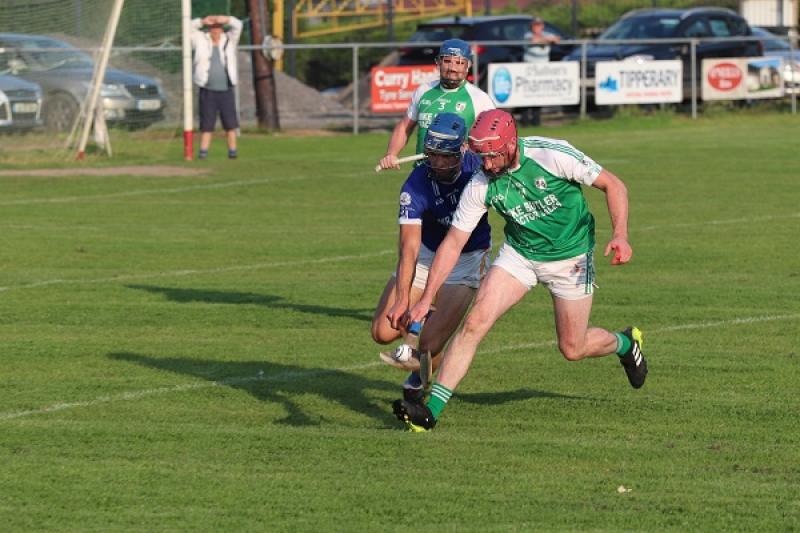 The sides clashed at Bansha at the weekend

Rockwell Rovers got off the mark at the third attempt in this years Gleeson Concrete West Junior A Hurling Championship in a sun drenched Bansha on Saturday evening in what was a repeat of last years semi-final. Rockwell Rovers went into the game on the back of two defeats while Lattin/Cullen were looking to make it two from three after following their round two loss to Clonoulty/Rossmore.

Goals in either half from TJ Ryan and Tom Tobin added with ten points from the stick of Alan Moloney were key to this, Rockwell who bossed their opposition physically in key areas of the field. Rockwell Rovers finished the game with eight different scorers as they dominated large parts of the game finishing with 2-10 from play added to their ability to score from long range. Lattin/Cullen finished with just two scorers and just three points coming from play.

Rockwell Rovers were three points to one up inside the opening two minutes. Despite Jack O’Halloran pointing from a placed ball, it was Rockwell Rovers who looked the more dangerous in the opening exchanges, with points from Kevin Cleary, Aidan Barron and Colm Moloney. Lattin/Cullen managed to stay in touch with pointed frees from Jack O’Halloran and Cathal Dillon but were dealt a big blow when TJ Ryan collected possession from a ruck and with a clear goal in front of him he made no mistake in finding the net. Lattin/Cullen now operating with Cathal Dillon at centre back in a bid to get grip on the game came more into the game after the water break. Jack O’Halloran also coming out from the half forward line. Five points in a row from Jack O’Halloran from play and placed balls edged them two points ahead. Rockwell Rovers moved Alan Moloney who had being operating at centre forward out around midfield and they reaped the benefits with Moloney pointing three and TJ Ryan whose running was causing problems added two more. Rockwell Rovers ahead at the break 1-10 to 0-10.

The opening exchanges were tit for tat with Tom Tobin and Alan Moloney swapping points with Jack O’Halloran and Cathal Dillon. Rockwell had a huge cushion by the fifth minute when Tom Tobin cut in from the wing breaking the tackle and firing to the net. They were well in command with Pat Hally at centre back while their midfield partnership of Aidan Barron and Liam Fahey were well on top. Both sides continued to trade scores with the goals the difference at the water break, 2-16 to 0-14, with Moloney continuing to cause problems.
Rockwell Rovers saw out the last quarter despite Cathal Dillon goaling from a free with nine minutes to play, winning by 2-18 to 1-15 to get themselves back into contention for the knockout stages of the competition.