10 goals in three games - he's got to be Tipperary's soccer hotshot! 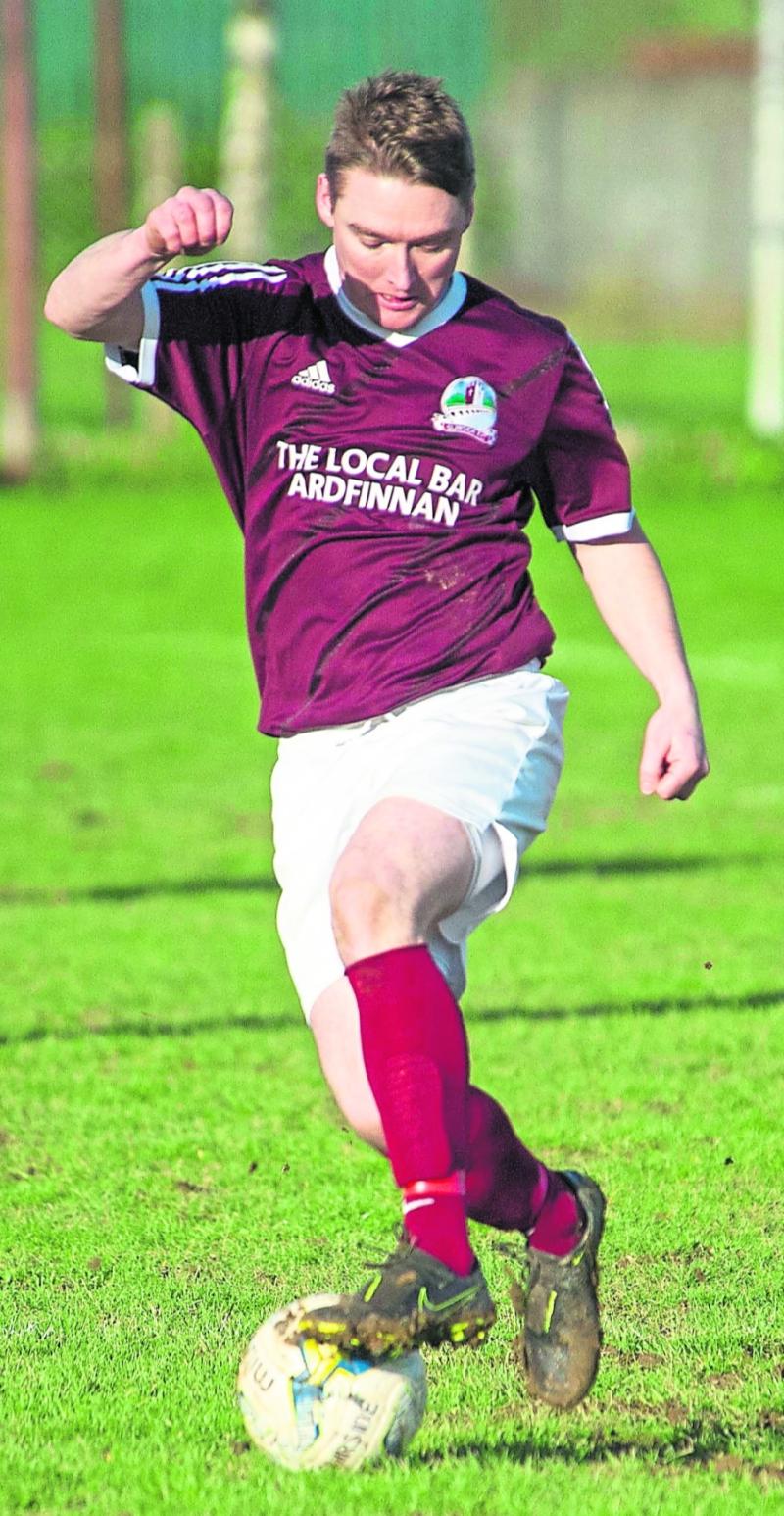 Paul Kennedy (Suirside) has scored 10 goals in his last three games including a hat-trick on Sunday last in his side's 8-1 win over Tipperary Town in Division 3 of the TSDL League.

Suirside 8 – 1 Tipperary Town
Ever dependable striker Paul Kennedy bagged another hat-trick on Sunday afternoon, as a classy Suirside performance put Tipperary Town to the sword to continue the home side’s unbeaten run as they march to the top of Division 3.

This latest game was only four minutes old when Kennedy put his stamp on it, finishing from close range after John Darmody’s work had set him up. And he doubled his and his side’s tally in the 25th minute when he fired home a sublime free-kick. A Jason Coffey strike ten minutes before the break gave the Ardfinnan side a dominant lead going to half-time.
But it was a mesmerising spell in the first ten minutes after the break that comprehensively put this game to bed. Two minutes after the restart the ever dependable David Brannigan coolly slotted home, and that was followed a minute later by a superb poacher’s effort that completed Kennedy’s hat-trick, after Aiden Flannery had done the donkey work regaining possession of the ball.
Dylan Nugent made it six in the 50th minute and five minutes later Suirside completed this blistering spell when Coffey got his second and his side’s seventh with another good strike from the edge of the area. Just before the hour mark, hard working John Darmody got the goal his play deserved to complete the home side’s scoring. A late consolation for the visitors was no more than that.

Clerihan 1 – 0 Moyglass United
This was an important game at the top of the Third Division, with both sides not only loking for promotion at the end of the season, but also having eyes on picking up the title. Clerihan started brightly, with the visiting team’s ‘keeper being forced into a neat save in the fifth minute from Jack Burke.
He again came to his side’s rescue in the 20th minute, this time denying Rian Clancy, who got his head to Sean Maher’s pinpoint free kick.
Moyglass grew into game as the half went on, going close themselves on few occasions, and the hosts had Tommy Morrissey in goal to thank for getting them through a shaky period midway through the first half.
The best chance of the half, however, fell to the home side when Jack Burke was put through on goal in the 40th minute, only to see his effort hit the post and cleared to safety.
In the second half the hosts started to control the ball more and got ahead through a brilliant individual goal from Sean Maher after five minutes, when he beat a number of Moyglass defenders before firing to the net from inside the area.
The rest of the game turned out to be entertaining for the supporters, as both sides had spells of domination without managing to convert the chances they were creating.
The home side went down to ten men thirteen minutes from time and after that the visitors took complete control, but it was to no avail as Clerihan hung on for what may turn out to be three very precious points.

Donohill and District 1 – 2 Bansha Celtic
Donohill hosted Bansha’s seconds in a very competitive game on Sunday afternoon but were undone by a single goal, as both sides fought for a chance to get involved in the promotion battle. The first half saw plenty of chances for both sides, with the visitors eventually opening the scoring on the half-hour mark from a scramble in the box that was finished off by Philip O’Mahoney.
In the second period the home side spent much of the time pushing forward in search for an equaliser, which eventually came in the 65th minute from a Dinny Crosse free kick.
Ten minutes before the end the visitors caught the hosts with a classic counter attack and a tidy finish from Ephraim to secure all three points.

Tipperary Soccer: Feisty encounter as both sides end with 10 men