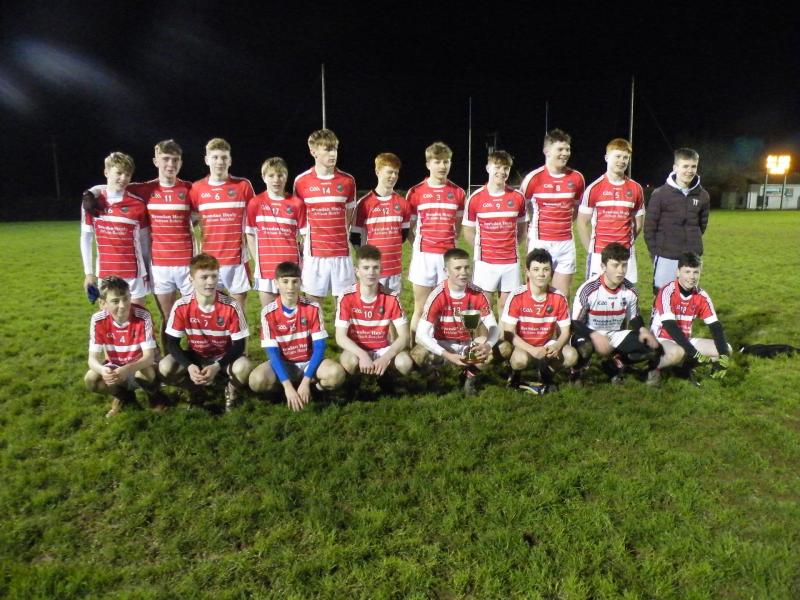 The Galtee Rovers panel which claimed the silverware this week

The game was played at New Inn this week

By: John O’Shea at New Inn.

Galtee Rovers are West Minor (Under 17) B Football champions for 2021 following their one point victory over Golden Kilfeacle at New Inn on Wednesday night. Played on a bitter cold night, with a slight breeze, this was an exciting affair, especially the second half, when the game moved up a gear.

The final quarter was particularly exciting, with Galtee captain, Eoin Halpin getting the all important goal on twenty one minutes. As the game entered injury time, extra time looked on the cards, but in a last gasp effort, Conal Grogan emerged the hero for the Bansha men as he popped over the winning point, five minutes into time added on. This was heartache for the Golden lads, who had come right back into the game through a Lee Hayes goal ten minutes into the second half.

Sam Hall opened the scoring at the Cashel end when he put over a point from a placed ball after two minutes. Scores were hard to come by in the opening ten minutes, with both defences on top, and the players adapting to the cold conditions. Conal Grogan equalised after eleven minutes with a point from a very tight angle, but Aidan Touhy replied just before the water break to ease Golden back in front.

Galtee upped the momentum for the second quarter and their running at the Golden defence proved successful. Eoin Halpin equalised two minutes after the resumption and Conal Grogan got his second of the night from out on the right to ease the Bansha men ahead for the first time in the game. Halpin also got his second before the half time break to double their advantage, as they led by double scores, Galtee Rovers. 0.4, Golden Kilfeacle 0.2

After the interval break, Galtee went on the attack and two wonderful points from Daniel O’Dwyer stretched their lead out to four, as Golden looked in trouble. However, a sweeping up field move resulted in a Ben Currivan point at the village end as Golden fought back. Another good move ended with Lee Hayes finding the net, ten minutes into the half, to tie the game up. Galtee looked shaken at this stage as Golden pushed forward, but wayward shooting in front of goal, failed to convert possession into scores. They were rewarded with a Ben Currivan point from a placed ball to go one up at the water break.

The final quarter proved to be very close and exciting, with play moving from end to end. Nine minutes from time Eoin Halpin got in for a crucial goal to put Galtee two up, but Golden were not yet finished. Points from Lee Hayes from open play and a converted Ben Currivan free tied the game as the clock headed for the thirty-minute mark.

The final minutes proved to be very tense as both sides sought a winner. Eoin Halpin converted a close in free but Jason Morey equalised two minutes into injury time. With the game looking like it was heading for extra time, a Galtee move on the stand side ended with Conal Grogan putting over the winner, much to the delight of the faithful Galtee following.