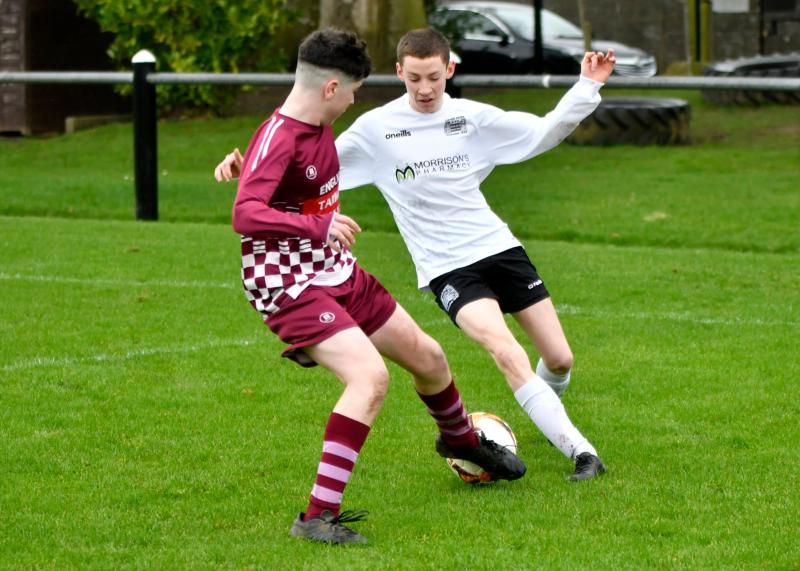 Jason Harrington (Cahir Park) attempts to get past Adam Lohan (Cullen/Lattin) in last Saturday's Youths Division 1 game at Cahir Park which the home side won.

Rosegreen Rangers 8 – 1 Kilsheelan United
Rosegreen Rangers continued their climb to safety in Division Two with a big win over struggling Kilsheelan United at a wet and windy Nijinsky Park on Sunday afternoon.
The home side finally kicked into gear after a tentative opening quarter of an hour, when they were awarded a free kick just outside the visitors area, and Ian Shelley slammed the ball to the net, leaving the United keeper stranded.
Seven minutes later they doubled their advantage when Jack Marshall cleverly flicked a cross into the area past the outstretched have of the keeper.
But the visitors pulled a goal back five minutes before the break when they were awarded a close in free kick of their own and it was fired home.
The early part of the second half was still a close affair until around the hour mark when the visitors were reduced to ten men, and they began to visibly tire. When they did so, the home side took full advantage adding three goals in a five minute period between the 75th fifth and 80th minute mark, with a brace by Dan Currivan and a sublime effort from Daithi Bargary.
Substitute Davy Butler then got in on the act adding a sixth for the home side, before a Sean Hayes tap in with two minutes to go made it seven. Butler added his second in time added on to cap an excellent performance by the home side.

Mullinahone 2 – 1 Clonmel Celtic
Mullinahone ensured that they would remain the fly in the ointment in the Second Division title and promotion race when they completed the second leg of the double over their two Clonmel rivals, by adding a victory on Sunday over Celtic to their win over Town last weekend.
This game was played in blustery conditions which made it hard for both sides, but the home side did make the best of the early chances. It was no real surprise when they took a deserved lead on the half hour mark with Jamie Hindley finishing off a good move with a strike from 12 yards out.
They maintained this lead to the break, but the visitors were back on terms five minutes into the second period when they were awarded and duly despatched a penalty kick to level the game.
After that both sides went hard at each other to try to pick up the vital three points, and it looked like neither would make that breakthrough until the final minute when the home sides Ashley Lazlett scored the winner after beautiful run from Alex Maher had Celtic’s defence at sixes and sevens before he found his striker to finish from close range.
The result sets the final push for honours in the Division right to the end and it would be a brave pundit who would predict the outcome just yet.

St Nicholas 1 – 4 Galbally United
The inclement weather truly made this a game of two halves as Galbally United rose off the bottom of the Division Two table with a comprehensive win in the end against fellow relegation strugglers St Nicholas.
The home side had the elements at their back in the first half and had the better of the play without carving out too many clear chances. But they finally made one pay on the half hour mark when after some good play through the middle of the pitch, a clever pass from Mark Flannery put Paddy Fitzgerald clear through and he made no mistake from ten yards out.
Overall though the hosts must have felt that they should have capitalised more in the conditions and that was borne out when the visitors took total control in the second period. They peppered the home goal with shots and finally managed to breach the resolute Saints defence in the 60th minute when they drew level courtesy of a Josh Dineen strike. In total control now, a brace of well taken goals by Eoin O’Mahoney gave Galbally the advantage as the home side wilted, and a fourth in the final minute by Jordan Dineen was the final nail in the home sides coffin.
The result meant that Galbally leap frogged their opponents and now leave the Solohead side in perilous danger as the season rolls onward towards its conclusion.

Clonmel Town 2 – 1 Cashel Town
A Michael O’Sullivan thunderbolt was to be the difference here, when the home side came back from a goal behind to keep their promotion hopes on track in what was a very entertaining game played in blustery conditions in The Complex.
The hosts started on the front foot and were dominating throughout the pitch but against the run of play Cashel took the lead when a Kyle Ryan free kick was fumbled by the keeper and Dónal Reade was quickest to react to put the visitors a goal up in the 18th minute.
To their credit the home side kept piling forward but were met by a very well organised Cashel defence that saw them go in with that advantage at the break.
The second half was a carbon copy of the first with the home side completely dominating the play. The visitors stood firm however and it took until the 68th minute before the incessant pressure took its toll, when an in swinging corner was met by the head of John Shanahan who deservedly got the home side level.
Cashel to their credit were giving everything to this game and threatened a few times to catch the Town defence on the break, but the game turned 12 minutes from the end when Michael O’Sullivan picked up the ball just inside the opponents half before skating past two players and unleashing an absolute thunderbolt of a strike to the top corner from all of 30 yards out to seal what will be another vital three points in both the title and promotion race come season end.