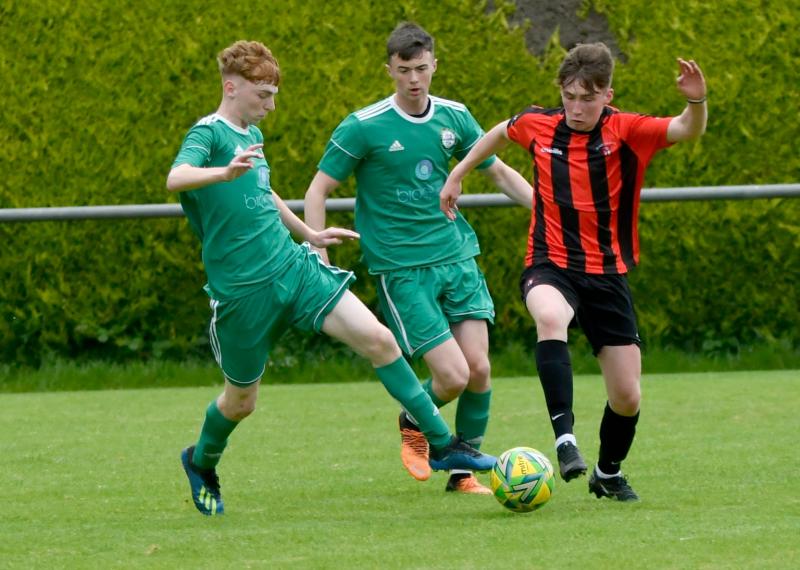 Clonmel Celtic, backboned by some of their old guns, rolled back the years on Tuesday night of last week to come back from two goals behind, to emerge victorious in the final of this year’s Paddy Purtill Cup, and bring the curtain down on a long TSDL season.
Played one a night that threatened rain, but never delivered, and in front of a large crowd of supporters from both sides, the two teams served up a very entertaining game, that was in the melting pot right to the very end of the extra-time that it took to separate the sides.
But it was also a game that ebbed and flowed, with both teams having periods of dominance and in the first half of the game, that was most firmly in the hands of the Thurles side. Villa started well and pegged Celtic back continuously for the first ten minutes.
Their first real chance came in the ninth minute when a goalward bound effort by Robbie Stapleton was deflected but went just past the post with the Celtic keeper stranded.
The Clonmel side weren’t so lucky two minutes later when a Keelan Graham past split their defence and Eoin O’Dwyer gave David Cashin no chance of stopping his stunning shot which almost took the netting off the goal.
They continued to push forward with the Celtic defence looking over-run on a number of occasions. A needless handball at the edge of the area was almost punished when Sean Condron was found completely alone from the subsequent free kick, but the advanced defender managed to head his effort wide with the goal at his mercy.
But in the 25th minute they got the second goal that their play deserved, albeit from a fortuitous source. There looked to be no danger when Eoin O’Dwyer was chasing a ball away from the Celtic goal, but he was hacked down awkwardly just inside the Celtic area and the referee had no hesitation pointing to the spot, giving Villa a penalty kick. And veteran defender Paraic Fogarty made no mistake from 12 yards to put his side well in charge of the game.

The Clonmel Celtic team who defeated Peake Villa in the final of the Paddy Purtill Cup.
However, rather than fade away, this seemed to wake the Clonmel up, and from then on they took control of the midfield area, with Andrew Cosgrave acting as general and Rory O’Dowd his more than able lieutenant, they began winning more possession and spraying passes around for their forwards to fashion chances from. Right back Peter O’Dowd careered up the wing in the27th minute and picked out his other full back Jake Forrestall whose shot just barely cleared the bar. And just after the half hour mark, only confusion between two Celtic strikers who got in each others way gave Villa a chance to clear what looked like a certain goal after Cosgrave had once again opened up their defence.
But Villa remained dangerous and six minutes before the break, Celtic keeper David Cashin has to produce a spectacular save from a Conor Murphy shot that looked an absolute certainty, and would have given Celtic a mountain to climb had they conceded the third. But they managed to get to the dressing room to regroup before things got any worse for them.

Coming back out for the second half, Celtic were boosted by the arrival of former Irish international player David Joyce and he immediately began making his presence felt in the centre of the park. His nous and O’Dowd’s legs were causing Villa all kinds of problems and within five minutes they looked like they had pulled a goal back, when Darren Sweeney rounded Josh Coady, only to see his shot come back off the upright and away to safety.
But only two minutes later, the breakthrough came when O’Dowd played a peach of a ball over the Villa defence, and this time Sweeney was not to be denied and he eased the ball past the Villa keeper from 12 yards out. Celtic took control of the important central area for the next 20 minutes or so, but never really threatened to add an equaliser, with Villa comfortably defending their lead. And with 12 minutes left on the clock, it looked like Villa had wrapped the game up, after Cashin spilled a free kick in front of Conor Murphy, but then almost miraculously recovered to keep the rebounded shot from the net. And they were to rue that miss with seven minutes left, when another old hand on the Celtic side, Craig Condon, came up for a corner, found himself inexplicably unmarked and headed to the net to send the game to extra time.

Back from the seeming dead, Celtic completed their comeback five minutes in when they were awarded a free kicked ten yards outside the Villa area. The initial shot was parried away by the Thurles keeper, but Jake Forrestal made up for his earlier miss by reacting the quickest and making no mistake a second time, firing home from inside the six-yard area to the delight of the travelling Clonmel side. They should have wrapped the game up right on the cusp of half time in extra time, but this time Villa keeper Josh Coady made up for an earlier error of his own by getting down to the feet of substitute Ayo Williams and carrying off a brilliant double save to keep the tie alive.
The minutes ticked away however and in the end Celtic held on for their win, and the presentation of the Paddy Purtill Cup as the evening light began to fade on a well-manicured Cahir Park, the spiritual home of football in South Tipperary. And with that, the light also faded on the season of football, but no doubt we’ll all be back in two month, chasing glory when it restarts again.